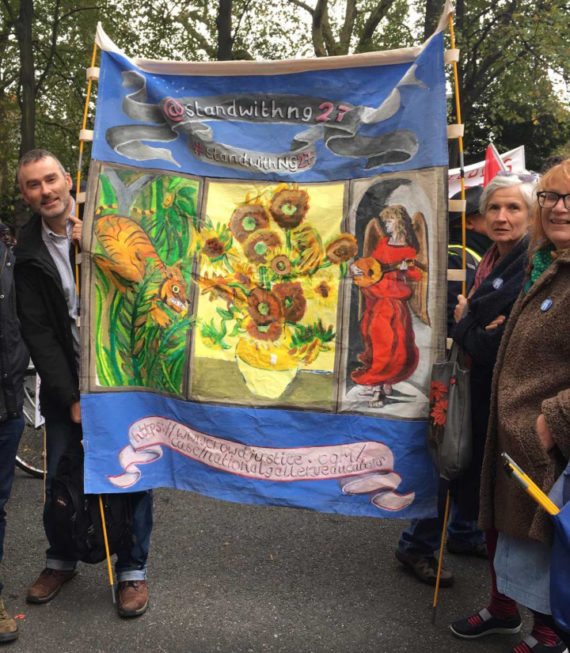 Former National Gallery educators commence 10-day tribunal for unfair dismissal The 27 educators, who were dismissed in October of last year, are asking to be recognised as employees rather than self-employed contractors, with the tribunal potentially proving to be a landmark case for employment law in the public sector.

The tribunal will also decide a new point of law, namely whether workers ought to have the right to collective consultation prior to termination of a contract. Currently this right is only given to employees and no court has previously considered this point of law.

Marie-Therese Ross, a claimant who worked for the National Gallery for 24 years, said: “This isn’t just about us. Our case highlights the exploitation of precarious workers across the arts and beyond. We are standing up for fair employment rights and calling for our public arts organisations to value the expertise and experience at the heart of their education programmes.”

Al Johnson, who worked for the National Gallery for 19 years, added: “Dismissing these educators represents a loss of over 500 years of teaching experience, knowledge, and inspiring conversations with the public about the art that belongs to us all.”

In order to pay for their legal costs, the group launched a crowdfunding campaign that hit £10,000 within the first 24 hours. They have now raised over £70,000 through individual public donations, sales of their artwork, fundraising lectures and workshops.

However, due to the growth in their case and recent Preliminary Tribunal decisions, the group have had to extend their appeal to £90,000 to cover their legal costs.

Marie van der Zyl, Partner at Gordon Dadds LLP, who are the educators’ legal representative, said:  “Individuals working in the arts are in need of certainty surrounding their employment rights and it’s essential to ensure they are categorised correctly.”

More on this story: NG27 member Richard Stemp argues that the case has important implications for all artists and those working in the arts. 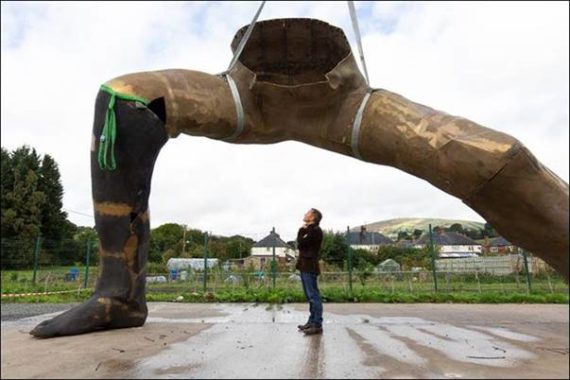 UK’s largest bronze sculpture to be installed outside Plymouth theatre Sculptor Joseph Hillier’s 7m (23ft) sculpture, entitled Messenger, will be installed outside the Theatre Royal Plymouth next year. It was inspired by an actor rehearsing Shakespeare’s Othello at the venue and had the working title of Bianca after the character whose ‘split-second pose’ is the basis for the piece.

Hillier said: “This work offers a young, powerful woman, a potent force about to transform the world by her actions. The actor carries the voice of her playwright or director – she carried a message. It’s a metaphor for what great theatre does.”

More than 200 bronze panels are being welded together at the Castle Fine Art Foundry in Llanrhaeadr-ym-Mochnant, Powys, and the sculpture will eventually weigh nine and a half tonnes.

Rossetti drawing found in Edinburgh bookshop to go on display The preparatory drawing for the pre-Raphaelite painter’s famous work Pia de’ Tolomei was originally bought in 1956 by Sir Ivor Batchelor, professor of psychiatry at Dundee University, and his wife Honor. It is still in its original frame, and has a label on the back from Rossetti warning those that might want to de-frame the work of the fragile nature of the pastel.

Pia de’ Tolomei was produced late in Rossetti’s career, from 1868 to 1881. The final painting is now in the Spencer Museum of Art, University of Kansas.

The sketch is on display as part of an exhibition of works from the Batchelors’ bequest at the Fitzwilliam Museum, Cambridge. The show also includes work by John Ruskin, William Orpen, Walter Sickert and Gwen John, as well as stoneware, glass, bronze and pottery pieces.

Large collection of photobooks, vintage photographs, posters, ceramics, and art deco furniture lost in California wildfire Dutch curator Manfred Heiting’s collection was destroyed in the massive fire that spread across Northern California for two weeks earlier this month. The British Photography Journal reports that Heiting’s world-renowned library, which included more than 36,000 volumes of photobooks from Europe, the United States, the Soviet Union, and Japan, was among the buildings effected.

Heiting told the Dutch newspaper NRC Handelsblad: “On satellite photos I can see that everything in my neighbourhood has disappeared. Two or three houses may have survived. The rest was pulverised in a ten-minute fire storm.”

France agrees to return 26 sculptures to Benin following report into colonial-era artworks looted from Africa Commissioned by French President Emmanuel Macron, the report recommends the permanent restitution of thousands of artworks, and follows his promise to make the return of African art a ‘top priority’ during a trip to Burkina Faso’s capital, Ouagadougou, last year.

The 26 objects that will be returned to Benin include statues from the Palaces of Abomey, the former capital of the kingdom of Dahomey, which was seized by France in 1892. The 108-page report was written by French art historian Bénédicte Savoy and Senegalese academic writer Felwine Sarr.

Speaking to the New York Times, Sarr said: “We’re proposing a framework that takes into account the time constraints of the requesting nations, so that we’re not imposing a vast quantity of restituted objects on them, and are making sure that they actually want restitution, are prepared for it and are in a position to organise it.”