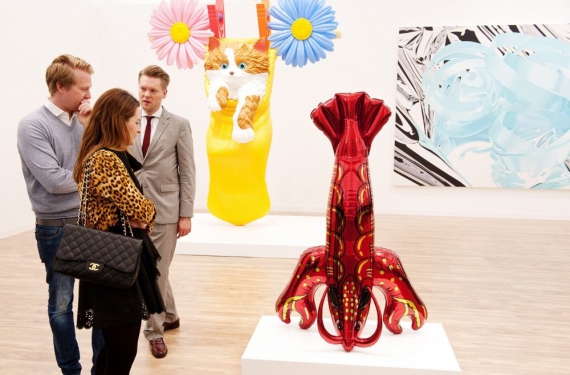 This is the first edition of Frieze I’ve ever attended. I approached it with an open mind, aware of what an art fair is and what my expectations could and should be.

The first thing to remember about Frieze is simply that it is an art fair – not an exhibition or biennial. Artists, particularly those of us who are not featured in Frieze, can feel a bit righteously critical of such an event because it feels so extremely commercial. Well, the fact is, trade fairs are entirely commercial. For me, the questions are whether Frieze is useful in any way for artists and whether it is good for artists and for art – including side aspects of the fair, such as Frieze Projects.

Wandering through the enormous fair, I was less struck by the infinite variety on offer than by the tendencies that are displayed. There isn’t an enormous difference between the offerings, any more than there is in fashion or automobile shows. For example, about seven years ago, many art fairs included large amounts of photography, principally enormous digital prints on surfaces such as glass and metal. This tendency has all but disappeared. Although photography is present, there seems to be a renewed emphasis on traditional photographic techniques; for example, silver gelatine prints by Zoe Leonard.

Another tendency is large, highly colourful paintings made using textiles; one of the most outstanding is by Jayson Musson at New York’s Salon 94 gallery. Collage is strongly represented in the fair; perhaps the outburst of attention given to the brilliant John Stezaker has renewed interest in collage as an art form. Or maybe buyers are looking again at ‘the handmade’ as a desirable quality.

Perhaps surprisingly, given all the media attention, there was an almost total absence of anything resembling street art. Does this mean that street art is now too popular, too ‘democratic’ – since as Grayson Perry recently pointed out in his Reith Lecture, “popularity has always been a quite dodgy quality” in the art world? Or perhaps it is absent because it’s already ‘over.’ Which begs the question, was it ever really even here?

There was the expected contingent of what can only be called bad painting by ‘name artists’ such as Martin Creed, who really cannot paint for toffee. Then again, it is actually possible to own a Martin Creed painting, when it’s not possible to own a Martin Creed performance – if owning ‘a name’ is your thing. I used to get upset by bad painting, but I no longer do. The world is big enough to contain Elvis Presley rendered in oils on black velvet, The Dance by Henri Matisse and Martin Creed’s stripes. It’s up to you which one you want to look at on the wall. It’s a little bit harder to work out what to do with a sculpture consisting of old sunglasses chained together by large safety pins and hung from the ceiling.

It was fun to see new paintings by Billy Childish featured at the Carl Freedman Gallery. In fact, London galleries represented themselves very well on the whole. Special mention goes to Max Wigram and the always-interesting Kate MacGarry, who featured only the work of the excellent Marcus Coates, with a gripping half-hour film (The Trip), which I watched in its entirety, and some very attractively-presented photographs.

One of the most striking stands at the art fair is from Vitamin Creative Space, based in Beijing. I don’t know a great deal about contemporary Chinese art, but certainly Vitamin Space are doing something interesting, particular with photography. I was less enchanted with work such as Thomas Struth’s Ulsan, chromogenic prints at Rüdiger Schaettle – the bleak, dreary and depressing images of a South Korean industrial district lack the compromised visual poetry of Edward Burtynsky or Nadav Kander. What are they for? To remind us how awful we humans are?

Galleries are not required to be representative of the countries in which they are based. This means that the art fair offerings are very eclectic and don’t in general form national groupings. However, on the whole Asian galleries tend to exhibit Asian artists, and a fascinating Athens gallery, The Breeder, had a particularly good selection of work by Greek artists. My own very non-scientific survey seemed to indicate that German artists predominate. If my survey is even a little bit accurate, it would be interesting to ascertain why this might be the case.

Difficult to get to grips with

I expected that this review would mainly consist of looking at Frieze Projects, a programme of artists’ commissions curated by Nicola Lees. Since most of these projects seem to include some kind of performance, to be held during the course of Frieze, it’s a bit difficult and perhaps unfair to say much about what I saw on Wednesday’s press viewing. But let me go ahead anyway. The work is installation based, in contrast to the work in the wider fair, which is much more varied. The video by Pilvi Takala, recipient of the Emdash Award, is conceptually quite interesting and watchable.

The rest of the works are much more difficult to get to grips with. The projects aren’t labelled, so it’s very hard to know who is responsible for them. I had to consult a large, awkward sheet of paper, not the most convenient thing to do in the space. There was some terrible work, the most dreadful being some kind of paintball-machine installation by Ken Okiishi. Oh, the hoary painting machine concept – how can this be a curated project? Likewise, Seven Lamp Memories by Josef Strau, an insanely boring thing that consisted of seven texts (some kind of short stories printed in tiny font) and two ordinary table lamps, presented in a corridor. It may be that there will be an astonishingly mesmerizing performance happening within these installations, but don’t hold your breath.

I don’t know what Frieze wants to say or do with these curated projects. The art fair itself does what it says on the tin. It displays the wares of some important galleries in Europe, and a few from the rest of the world. It makes them available to purchase and it makes it clear to the non-purchasing visitor what general tendencies are afoot. Is it good for art? Yes. It’s great that so many people are interested in buying art, it’s great that there’s an active market. OK, some of the people that will go to Frieze could possibly be monstrous oligarchs raping the earth and ripping off the masses, although I can’t say I really spotted any. For the most part the visitors will be well-to-do people who like art and want to buy it, and we would be terrible hypocrites if we didn’t see this as a good thing.

The business of art

Is Frieze useful for artists? Clearly, if your work is being sold there, yes. If you’re not featured in Frieze? That really depends on the type of artist you are. Any talented artist could certainly go to Frieze and study the market and tailor work for it. It may, or may not, work. But many brilliant artists are uninterested in that; they are following their own path.

If I am uncomfortable in any way with Frieze, it is on two counts. I question the spurious intellectuality of the Frieze programmes; the attempt, with the talks and the curated projects, to give this trade fair the veneer of being an intellectual contributor to ‘culture’. This follows through to my other discomfort, which is the cozy relationship that exists between our national arts guardians (spotted at the fair), and the commercial dealers.

Our arts funders, national museums and collections appear to be very much guided by the commercial criteria of the big dealers and the art market. The curatorial tendencies seen in Frieze are replicated without question in our national collections. The intellectuals and tastemakers featured within the art fair are also those who hold positions within, or take large funding from, our national agencies. The fact that this is not actually transparent is worrying. It also reinforces the London-centric tendencies within British art in general. This is not Frieze’s fault; it is a problem of the British art world and cannot be blamed on Frieze – at least not totally.

Frieze is about the hard-nosed business of art. Attending the fair is a good education in how the art market works and how art business is conducted. Seeing it as anything other than that is a mistake.

Frieze Projects 2013: “This year it’s not just about the fair” – by Dany Louise

Public art: debate questions who and what it is for – Jack Hutchinson attends the Frieze debate

‘Frieze week’: other art fairs are also available – A guide to art fairs happening in London