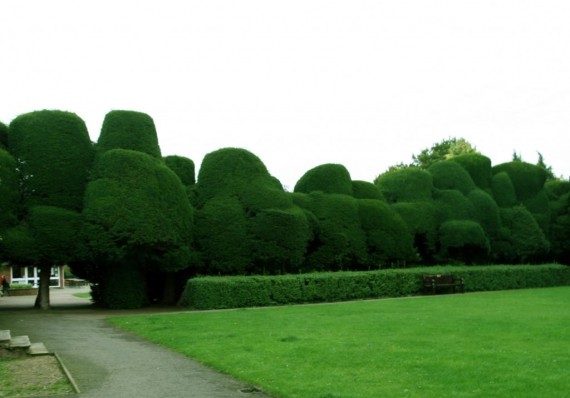 The Yew Hedge at Ayscoughfee Hall and Gardens is out of this world. It’s one of those idiosyncratic creations, part designed, part serendipitous – the result of 300 years of extensive cultivation and periodic neglect.

Ayscoughfee Hall is the final venue of a day-long journey and the estate’s head gardener, Dan Cooper, is attracting admiring comments from Bethan Huws: “The hedge is his work and he’s done it so beautifully,” she says.

Huws accidentally met Cooper on a site visit. It was her conversation with him that led her to create a self-effacing audio installation (using a British Library recording of bird song) that aims to focus the audience’s attention on the monumental ancient hedge.

The hedge forms a walled-garden, creating a readymade stage for all activities and encounters. Violin sounds emanate from a lone robed performer who ritualistically proceeds back and forth under an avenue of trees. A young woman speaking in a muffled voice into a recording device wanders over and stops in front of us. We’ve already witnessed this slightly odd behaviour by the drinks table that she was manning when our coach trip arrived.

Also at Ayscoughfee is Jordan Baseman’s carefully crafted film based on interviews and sessions with a local paranormal investigator. It references film history of spiritualism and conjures up his own interpretation of the interviewee. As he tells the receptive coach-tour audience, “when you don’t show the person, you can make them say what you want them to say”.

Amanda Coogan has mentored seven emerging performance artists to develop work in response to Ayscoughfee and its collection of farm workers’ clothing and tools. It is one of these artists, Amelia Beavis-Harrison, who has been serenading us by violin, a reference to ancient trade laws and smuggling. The eccentric museum employee is another artist, Laura Mahoney.

COMPASS curator John Plowman describes his curatorial approach as a creative process based on conversations; a natural synergy between each context and the artists’ research interests. It’s a bit like matchmaking.

“Lincolnshire is full of agriculture and I’m fascinated by the cyclical nature of it. In Amanda Coogan’s work there is this idea of the durational – the idea of work, of labour.”

Beacon Art Project is directed by Plowman and Nicola Streeten. Since its inception in 2004, the once-a-year programme of new commissions has moved from taking place in derelict and disused rural buildings such as manor houses and farms, to legitimate heritage sites.

This year’s sites also include Woolsthorpe Manor, the birthplace of Sir Isaac Newton, where Jem Finer will send you into outer space in a retro pop-top caravan (a co-commission with Tatton Park Biennial) and in the Manor’s kitchen, Huws’ presents a series of notes on Duchamp’s use of idioms in his 1947 piece, The Juggler of Gravity.

Huws’ main commission is at Grimthorpe Castle, a private aristocratic home where her large-scale letters, framed within alcoves, spell out the elusive statement, ‘Where is Duchamp? He is in the Library’ – a reference to notions of ancestry and classification.

Beacon are known for projects that are based around coach excursions, taking the audience to challenging contemporary art sited in non-gallery locations. Plowman explains: “The whole premise of Beacon is moving from London to a rural context, asking ourselves the question, ’How can we present contemporary art in the rural context?’”

The move from abandoned to cared-for sites has been a natural process based on Beacon having now established itself in the region: “The earlier Beacon projects were based on an urban model, to find abandoned sites and develop projects in them,” says Plowman.

Beacon’s core ethos is that the artist’s intention is never compromised and they work with site owners and partners who share this vision. “It’s the relationships with people. It’s all part of the process,” says Plowman. “We look at things holistically. We see the whole thing as a collaboration between Beacon, the artist, the institution, the site and audience.”