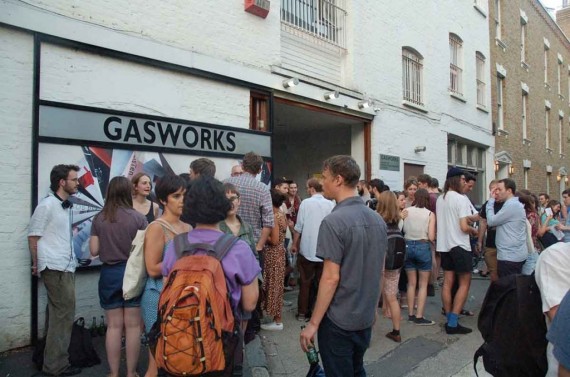 “It’s really about consolidating where we are and what we’re providing for artists; we’ve had to decide how we’re going to be housed in the future.”

For Gasworks Director Alessio Antoniolli, this is a challenging and exciting time. After nearly 20 years of renting its current space on Vauxhall Street, South London, the organisation now plans to purchase the building, with the intention to develop the site and provide more studio spaces for artists. “With the property market in London, it’s a very daunting task – but we’ve been able to negotiate a good price with the landlord,” says Antoniolli.

A defining feature of Gasworks is its status as a hub for emerging artists. A key component of this is its international focus – five of its 11 studios play host to a changing rosta of international residencies. It is also part of the Triangle Network – of which Antoniolli is Director – a grouping of like-minded artist-led spaces from around the world, enabling it to organise a series of International Fellowships for UK-based artists.

To secure the building and its redevelopment, Gasworks needs £1.8million. This will enable it to create a larger, more flexible gallery and new events space, and build more studios for emerging artists. With £1million already pledged from Arts Council England (ACE) – Gasworks is also an ACE National Portfolio Organisation – it’s well on its way to raising the funds. If successful, work should commence on the building in autumn 2014, with a launch date in early 2015. “We’re envisaging that we’ll be closed for around six months,” says Antoniolli. “One never knows once you start a new building programme what you will find out, so we are being cautious.”

As part of its efforts to raise the remaining £800,000 needed to secure the building and its redevelopment, Gasworks is to hold a high profile auction on 19 October, supported by Christie’s Auction House. Fourteen artists, including Chris Ofili, Hurvin Anderson, Anthea Hamilton and 2013 Turner Prize nominee Lynette Yiadom-Boakye, have donated works. “They [the artists] all have a connection with the building, they are part of the extended family,” says Antoniolli.

Hamilton, for example, is a current studio resident, while Turner Prize winner Chris Ofili’s connection with the organisation goes back to the early 1990s, when a Triangle Network residency in Zimbabwe allowed him to experiment with new materials, which had a pivotal effect on his works.

Brazilian artist Alexandre da Cunha, a former Gasworks studio holder, is now on its board. As well as donating a piece – which was part of his exhibition at Thomas Dane Gallery last year – he has been heavily involved in the conception of the auction.

“One of the points I was insisting on was to curate a good selection of work, with fewer artists,” says da Cunha, who first became involved with Gasworks after graduating from the RCA in 2001. “[Gasworks] was a really important step in my transition from being a student to being a professional artist – it played an important role. It was a very safe and supportive environment for me.”

Initially receiving a free studio as part of the residency programme, da Cunha went on to secure one of the subsidised studios and spent seven years working in the space. “This auction is very important, especially for artists like myself,” he says. “It’s a very important turning point, and it feels great to support something that you are involved with – something that I have a really strong relationship with.”

Antoniolli shares the view that this is a pivotal time for Gasworks, while at the same time believing that the future of the organisation lies in doing more of the same. “We want to do what Gasworks does well,” he says, “we want to continue to focus on supporting artists at an early stage in their career – being a bridge between the national and the international.”