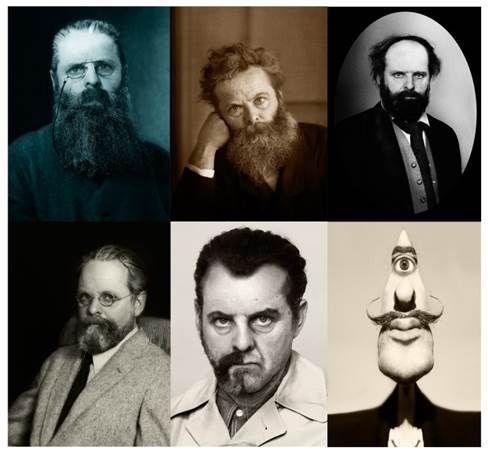 Gavin Turk has removed his impressive beard in six stages, each time taking on the identity of a famous bearded artist. These portraits of himself as 20th century greats – Auguste Rodin, William Morris, Paul Cezanne, Henri Matisse, Man Ray and Salvador Dali – were unveiled at The Other Art Fair preview in Bloomsbury last night.

A guest artist for the fair, Turk has created Project Beard especially for the event. Proceeds from sales of this limited editions will go to House of Fairy Tales, the children’s charity set up by Turk and his wife Deborah Curtis.

Alongside the 130 artists stalls – selected from over 700 applications – TOAF promises to be as bustling as ever with DJs, food and drink, live performances and children’s activities from House of Fairy Tales, which include a workshop led by Adam Dant, the official 2015 election artist.

Now into its 8th edition and firmly established in the London arts calendar, the Other Art Fair is venturing South West and will stage its inaugural Bristol edition in June. TOAF Bristol will take place at the Arnolfini from 5-7 June. 70 artists will be chosen to present their work by a selection panel comprising of Spike Island’s Helen Legg, street-artist Sickboy, Modern Art Oxford’s Paul Hobson and Aesthetica’s Cherie Federico.

Based alongside Bristol’s harbourside, The Other Art Fair’s first regional edition will include The Others Live, a programme of DJs, live music, live art and immersive theatre, including an interactive performance by the company non zero one who explore technologies to question how the audience can gain authorship of their experience within each performance.

The Other Art Fair London runs from 23 to 26 April at Victoria House, Bloomsbury Square, London. The inaugural Bristol edition takes place at the Arnolfini from 5-7 June.

The Other Art Fair: “Artists are at the forefront” by Jack Hutchinson