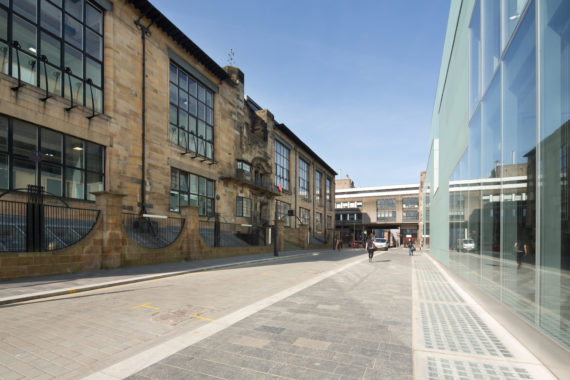 Cranes arrive to dismantle Glasgow School of Art Demolition work is expected to start later this week on the fire-ravaged Glasgow School of Art, with the site currently sealed off ahead of controlled work by contractors. They will begin by demolishing the south facade at the east end of the iconic Charles Rennie Mackintosh building.

During the process the contractors will remove a pair of distinctive wrought-iron finial roof decorations to preserve them for the future.

A spokeswoman for the art school told the Scotsman that due to the hazardous conditions assessment of the condition of the Mackintosh Building was partly undertaken using drone footage: “The Glasgow School of Art’s expert structural engineers, David Narro Associates, and contractor, Reigart, have prepared the methodology for the work which needs to be undertaken on the Mackintosh Building. This has been shared with Glasgow City Council building control and Historic Environment Scotland.”

Meanwhile, Glasgow City Council leader Susan Aitken has said it could be up to three months before residents and businesses located within the exclusion zone are allowed to return. Residents of 33 properties have had no access to their homes since the fire, with a hardship fund funded by the council and the Scottish government entitling each household to £3,000.

Scotland plans to make culture central to policy-making A draft of the first Scottish culture strategy to be produced in a decade reveals plans for a new cultural leadership post within government as well as new ways of funding the arts. The draft document also states people will be given “a greater say” in shaping the cultural provision in their communities with implementation of participatory decision making models and community ownership.

The strategy has been formulated following extensive consultation with the arts and culture sector. It is built around three key aims: transforming Scotland’s cultural, social and economic prosperity through culture; empowering people and communities by opening up access to culture; and sustaining culture so that the sector can flourish.

West Bank’s £16m arts centre opens against huge odds The 7,700 square-metre AM Qattan Foundation building in Ramallah has been designed by Seville-based architects Donaire Arquitectos and features studios, galleries, and educational spaces including classrooms and a library.

Omar Al-Qattan, the Beirut-born, British-educated chairman of the foundation, said: “It is more than just an arts centre. We hope it might be a modest microcosm of urban public life, something that Palestinian cities lack.”

Statue of St George ‘restoration’ does not go to plan A painted wooden effigy of St George located at a church in the Spanish town of Estella has had its features obliterated after a handicrafts teacher was asked to restore it. The 500-year-old sculpture’s subtle and age-worn armour and facial features have been replaced with a palette more often seen on toy figurines.

According to reports, parish authorities of the Church of St Michael gave the go ahead for the restoration, but the town’s mayor is asking why he was not also consulted. Koldo Leoz told the Guardian: “It’s not been the kind of restoration that it should have been for this 16th-century statue. They’ve used plaster and the wrong kind of paint and it’s possible that the original layers of paint have been lost. This is an expert job it should have been done by experts.”

The results are reminiscent of the infamous restoration work performed on a fresco of Christ in a church in the north-eastern Spanish city of Borja six years ago. The work went viral, with its amateur restorer’s efforts dubbed ‘the worst restoration in history’.

Ethiopia calls for Ten Commandments tablet concealed inside an altar at Westminster Abbey to be returned The country’s government is calling for the restitution of a tabot that was taken during the battle of Maqdala in 1868, when British forces attacked those of the Ethiopian emperor Tewodros.

The Ethiopian ambassador in London, Hailemichael Aberra Afework, told The Art Newspaper: “We are urging all those who hold items looted from Ethiopia to return them. This includes the tabot held at Westminster Abbey.”

However, a spokesman for the abbey responded: “The dean and chapter are very conscious of the sensitivity of the Ethiopian tabot, so steps were taken a number of years ago to ensure that the tabot, which is in a very sacred place, was properly covered and could not be seen by anyone. There are no plans to change these arrangements.”

Art dealer sues Poland after it sought his extradition over a Nazi-looted work of art Alexander Khochinsky was given the work, Antoine Pesne’s Girl with a Dove, by his father, a second world war veteran. He told Polish diplomats in Moscow in 2010 that he was willing to exchange the painting in return for compensation for real estate that had belonged to his mother’s family in the south-eastern Polish city of Przemysl before the war.

However, he was arrested in New York in 2015 after US prosecutors complied with a request from Poland to extradite him for holding a painting plundered during the second world war. He was released on $100,000 bail and placed under house arrest, but later that year a US District Attorney denied Poland’s request to extradite him citing a lack of evidence. Khochinsky is claiming the months of house arrest damaged him and his business.