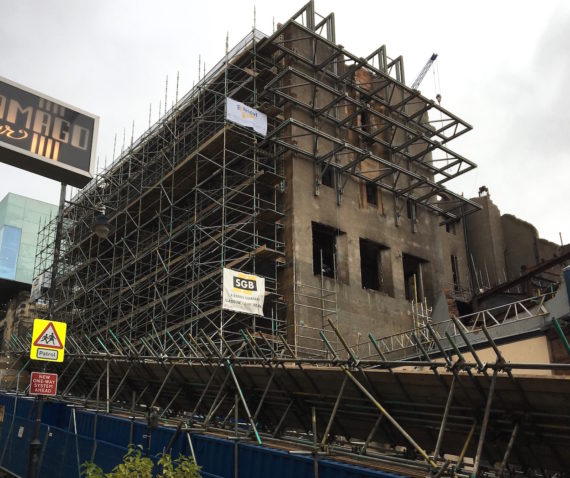 Professor Tom Inns has resigned as director of Glasgow School of Art after five years in the role. Until a new director is appointed the GSA will be led by its two deputy directors, Professor Irene McAra-McWilliam and Professor Ken Neil.

Inns’s time as the head of GSA has been marked by the two fires at the world renowned Mackintosh building, designed by Charles Rennie Mackintosh.

Following the first fire in May 2014, Inns oversaw the rebuilding and renovation of the fire-damaged art school which was only months away from reopening when the second, more devastating fire broke out earlier this year on 16 June.

Announcing Inns’s resignation, the chair of GSA’s board of governors, Muriel Gray, said: “On behalf of the GSA board and all at the School I would like to wish Tom all the very best for the future. He has had the most challenging tenure at the helm of GSA and we are truly grateful for all his enormous commitment and hard work – especially over the course of the past few months.”

Inns said that in stepping down he would “miss the creative energy of staff and students enormously”, describing the Glasgow School of Art as an “an exceptional place”.

He added: “Since the fire in June 2018, just months before the building was to be handed back to GSA, we’ve worked tirelessly to stabilise the building as quickly as possible to minimise disruption to our local community, and to reopen our own campus for the new academic year.”

The GSA has pledged to rebuild the Mackintosh building and work is continuing on its fire-ravaged skeleton.

However, despite widespread support in Glasgow and beyond for the rebuild, in the months following the blaze there has been anger from local residents and businesses displaced due to the safety cordon established around the building. Nearby arts venue the Centre for Contemporary Arts (CCA) reopened to the public on 20 October having been closed since the latest fire.

The cause of the 2018 fire has yet to be established.

Inns said on leaving his position that it is “now time for a new director to work with the board to deliver the future vision for GSA”.