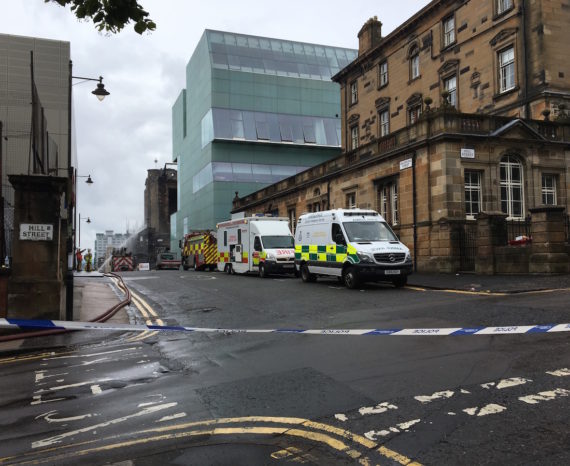 Glasgow School of Art fire safety system ‘was weeks away’ from being installed The British Automatic Fire Sprinkler Association has revealed that the huge pumps needed for a fire suppression system at Glasgow School of Art had arrived the day before the fire that destroyed much of the iconic building. However, the body revealed it would have taken weeks to complete the installation.

Keith MacGillivray, chief executive of the British Automatic Fire Sprinkler Association, told BBC Scotland: “They are very large pumps so they were delivered in component parts. It would have taken some weeks to reassemble the pumps and connect up the pipe work and obviously the water tanks would have had to be connected and put in place as well. Everything would also would have had to be tested thoroughly before being made operational.”

Meanwhile, building control officers in Glasgow have warned that the building’s walls may fall ‘without warning’, while Sky News has reported that the structure has moved six inches since the blaze. There is currently an exclusion zone around the site, which is also effecting neighbouring buildings on Sauchiehall Street including the Centre for Contemporary Arts (CCA) which is currently closed to the public.

There have been reports of people breaching the cordon, while a number of local traders have claimed the exclusion zone could result in the closure of their businesses.

In response, Glasgow’s head of building control Raymond Barlow, told the BBC: “I fully understand people’s desire to get back into their property and if we could safely do anything to facilitate that then we would. However, surveys in recent days have shown us that the west and east elevations remain of significant concern. This means that there is a risk that parts of the building might fall into Scott Street or Dalhousie Street. This could happen without warning.”

In a letter sent to Janet Archer, chief executive officer of Creative Scotland, the committee highlights that strategic mistakes forced some arts organisations to unnecessarily commit staff and financial resources to funding applications. It also found that arts organisations were competing for funding with the artists they represent, and that there was a limited geographic spread of awards, with no money allocated to 11 of Scotland’s 32 local authorities.

Creative Scotland faced a public backlash earlier this year over its decision to cut regular support for several touring arts organisations that work with children and disabled people. In the same funding round, it also withdrew its regular funding from the artist-run Transmission Gallery. 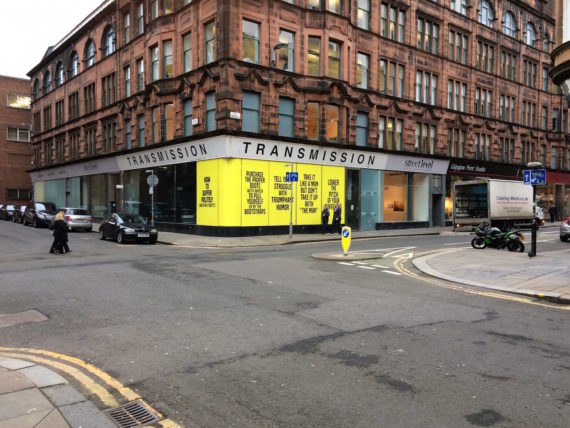 Creative Scotland reinstated the funding for five of the organisations following board resignations and criticism from Scottish Culture Secretary Fiona Hyslop, but did not reverse its decision on Transmission or the Glasgow-based art producers NVA, which has since announced its closure.

In an initial response to the findings, Creative Scotland’s new chair, Robert Wilson, praised the ‘broad ranging and constructive’ points raised through the inquiry. However, he said it was important to recognise that the ‘timing of the committee’s call for evidence took place before many important discussions had taken place with organisations to explain our decisions and respond to their concerns’.

Gallery owner arrested for installing protest sculpture outside pharmaceutical company Purdue Pharma Fernando Luis Alvarez, who owns an eponymous gallery in Stamford, Connecticut, installed a large steel sculpture of a burnt heroin spoon in front of the headquarters of the manufacturer of the addictive painkiller OxyContin.

According to Artforum, he is facing a charge for ‘obstruction of free passage’ for unloading the work in the company’s driveway, plus a felony charge for his ‘failure to remove it when the police instructed him to’.

The work, which is entitled Purdue, is by Boston-based artist Domenic Esposito, and is inspired by his brother’s struggle with addiction. The artist assisted Alvarez in installing the sculpture.

Saudi prince donates $10 million to the Museum of Islamic Art in Berlin Alwaleed Bin Talal, who is best known for being a billionaire investor, philanthropist, and member of the Saudi royal family, has donated the money in order to fund the museum’s exhibitions and educational programming.

The money will also fund a permanent display of Islamic art to be installed at the Pergamon Museum, which houses the Islamic museum, plus the institution’s Multaka program, which trains refugees to be museum guides. The funds were gifted through the Riyadh-based charitable foundation, Alwaleed Philanthropies, which ‘works to combat poverty, empower women and children, provide disaster relief, and enhance cultural understanding through education’.

German Triennial bans, then re-invites Scottish band who support the Boycott, Divestment and Sanctions (BDS) movement The Ruhrtriennale art and music festival in Germany had cancelled Young Fathers’ set after its members refused to stop supporting the BDS movement, which promotes the right of return of Palestinian refugees against Israeli occupation.

The Edinburgh-based band, whose music is a mix of hip-hop, experimental pop and punk, won the Mercury Music Prize in 2014. Responding to the original ban, they released a statement through Artists for Palestine UK, a network of artists and cultural workers who advocate for Palestinian rights.

The statement read: “Anyone who knows the band and our history will know we oppose all forms of hatred and racial discrimination. Always have. And we, like BDS, ‘do not tolerate any act or discourse which adopts or promotes, among others, anti-Black racism, anti-Arab racism, Islamophobia, anti-Semitism, sexism, xenophobia, or homophobia.”

A number of high-profile musicians backed the band, including Roger Waters of Pink Floyd, Thurston Moore of Sonic Youth, and Brian Eno. In a tweet, Waters questioned why the Ruhrtriennale would want to “distance itself in all forms from the BDS movement”, adding that the Palestinian-led BDS movement is “an international nonviolent protest movement that seeks to promote equal human and civil rights for all people everywhere.”

In response, artistic director of the Ruhrtriennale Stephanie Carp has released a statement re-inviting the band to play. In it she said: “Following the impression of many discussions and reflections over the last few days, I would like to correct my approach: I wish to invite the Young Fathers again to the concert in Bochum on 18 August 2018 although I do not share their attitude to the BDS.”

As Hyperallergic reports, last year a number of German cities including Frankfurt, Berlin, and Munich ruled that BDS uses language from the Nazi era, thereby leading them to ban BDS.

The AIR initiative will involve artists and creative figures working with schools for a fixed period, organising talks and bespoke educational events. An initial pilot involving 30 London schools will run through the autumn term with the full programme to be launched January 2019.

Zafirakou works as an art and textiles teacher at the Alperton Community School in Brent, an area where over a third of children live in poverty, whilst the murder rate is the second highest in the country.