Glasgow School of Art: show goes on but it's not business as usual - a-n The Artists Information Company 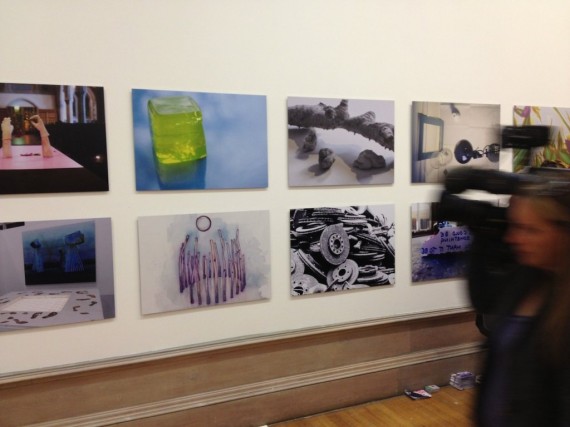 Three weeks after a fire ripped through the west wing of Glasgow School of Art’s Mackintosh building, the smell of charred wood still lingers in the air on the city’s Renfrew Street. Currently standing empty and with part of its roof gone, Charles Rennie Mackintosh’s masterpiece of early 20th century architecture plays no part in this year’s degree shows – on yesterday’s preview night it seemed to look on forlornly as visitors streamed in and out of the design shows in the newly-opened Reid Building on the other side of the street.

While the fire has clearly been a traumatic experience for all students and staff at the art school, the impact has been most keenly felt by the Fine Art department. Students have lost work, the department has lost its home, and there is no degree show proper this year.

There is, though, an exhibition of digital prints by final year Fine Art students just down the road at the McLellan Galleries, a grand, high-ceilinged Victorian gallery that was last used by Glasgow International. Each student is represented by a modestly-sized, simply displayed photograph of their work, regimently arranged on the walls and available to buy for £500 each. The students’ business cards sit in stacks along the skirting boards in front of the images.

It is not, of course, your usual degree show, and as grand as the gallery is it can’t match the light-filled studio spaces and twists, turns and beautiful eccentricities of the Mackintosh building. And yet, in part because of the circumstances but by no means entirely so, this is a curiously effective showcase – an exhibition where the work itself isn’t present, but its spirit of adventure and creativity most definitely is.

Aesthetically, it resembles a commercial gallery’s website transposed from the virtual to the physical – rows of same-sized images on walls rather than web pages. Although conceived out of a crisis and put together out of necessity, it’s a pleasingly democratic way to present the students’ work. It also creates new experiences for the viewer – your imagination can run wild as you go beyond the surface of these images and think about what may lie beneath.

In Katy Hassall’s photograph there’s a large plastic container of water suspended above a woman who lies on her back, as if about to be sacrificed; another woman sits in a corner playing the saxaphone. Is this a still from a film or was it a planned but unexecuted installation piece? Liz Sumner’s image of a woman clinging to the side of a large rectangular box, a bald-headed man stopping it from toppling over, begs the obvious question: what’s going on? And that hand in Caitlin Merrett King’s work – why is it holding aloft what looks like a bone slathered in white plaster, with three blue stripes on it?

The show, says acting Head of Fine Art Dr Alistair Payne in the hastily put together but rather lovely-looking fundraising catalogue (£40, available at the gallery), was “created under exceptional circumstances and evidence of the great resolve displayed by the community across the School of Fine Art.” He is right – and this is the most intriguing and emotionally-charged exhibition of fine art digital prints you’re likely to see for some time.

Fire service say Glasgow School of Art has been saved

Glasgow School of Art: no degree show for Fine Art, but alternative announced