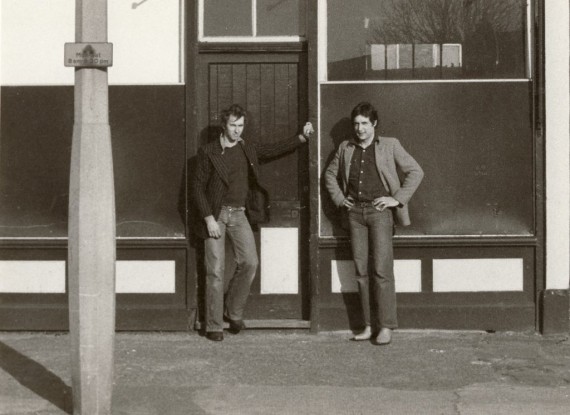 Setting up Acme Studios in 1972 was driven by necessity. As a group of recent graduates coming out of Reading University Fine Art Department, it was about thinking: ‘We have to get to London, London is where it’s happening. How on earth does one afford to have a space to live and work there?’

At that time, there were a lot of boarded-up, unused premises in east London – one or two of our contemporaries had made approaches to the Greater London Council (GLC) and had successfully negotiated an odd shop here or an old house there. This alerted us to the possibility and we went direct to the GLC and said: ‘Look, there’s all this empty property that’s just sitting there unused.’ Much of it was destined for major housing redevelopment which was delayed because of the economic down-turn. The GLC responded: ‘Well, you’ve got two alternatives, one is to squat, but we’ll get you out, and the other is to go away and form a housing association.’

It took seven people and ten pounds each to register as a charitable housing association. The GLC transferred two properties in Bow on Devons Road – I had one and my co-founder David Panton had the other. Each had a 21-month life, no utilities, and were in appalling condition, but when you’ve got no money and there’s a lot of space – even though it was short term – we made very good use of them.

I think the GLC was impressed by how quickly we were able to put the properties back into use, so it started to transfer more. We needed five houses for the seven founder members, but when we were offered more and more property, we said: ‘We know so many artists that could benefit from this.’

There was no intention to start an organisation – we sort of stumbled into it – but within a year we were managing about 90 houses and realised this was becoming more than a full-time job. There is still a huge challenge to be able to live in London and practice as an artist. Affording somewhere to live is challenging enough, but then to have somewhere to work – that challenge, or demand, has never gone away.

In 1976 we had the opportunity to open a gallery space in Covent Garden – which was at that time beginning to be redeveloped. The fruit and vegetable market was being moved out so there was an opportunity to get a very cheap space in the centre of London. The Acme Gallery was a natural development of our work as a housing association. We made decisions about the programme as we did when allocating somebody a house – will the artist be able to pull off what they are proposing? And is it important in terms of their practice to have an exhibition on this scale and at this particular time? It was a form of fundamental support for artists rather than about their work fitting into a curated programme.

We were prepared to involve artists in a conversation about what a gallery should be and how work should be presented. Word got round that for artists working in installation and performance we would go to unusual lengths to accommodate what they wanted to do. So we showed artists like Stephen Cripps, who created the most extraordinary pyrotechnic performances, and Kerry Trengove, whose An Eight Day Passage involved him being immured in a concrete bunker on the ground floor and digging his way out into the basement over eight days.

But although we had a reputation for showing this kind of work, looking back at the archive there were a lot of artists whose work needed to be shown in a traditional way – we made no value judgement about that at all and treated all artists equally in that respect. I love that idea that you would walk into the gallery one week and there would be an exhibition by Albert Irvin of big abstract paintings conventionally displayed, and the next week Stephen Cripps’ sculptures would be colliding with the walls and smoke would be pouring out of building into the street.

One of two great things about the gallery is that it opened, and the other great thing is that it closed. We didn’t try to repeat it, or carry on, or institutionalise it. It was very much a snapshot in time and its energy was maintained right through its five and a half years.

Hopefully, something of that energy is captured by the exhibition at the Whitechapel Gallery. It was very good to have been invited by the Whitechapel’s Director Iwona Blazwick to exhibit the archive there. She was aware of The Acme Gallery at the time and has kept track of our work since, and it’s the most appropriate place for us to have the show. Focusing on the first ten years for us is important, because in a sense that was such a different time. It was a time that younger artists today might not be aware of.

This year we are opening three new permanent buildings: High House Artists’ Studios in Purfleet; The Glassyard, in Stockwell, part of a student accommodation development for University of the Arts London; and Warton House on Stratford High Street. Through property ownership we are getting very close to the point of becoming a secure organisation, of being self-sustaining. We now own about half our buildings and have long secure leases on the others.

We’ve had great support from Arts Council England (ACE) for the last 37 years and have been successful in getting major capital lottery grants to establish a permanent property portfolio. We will not be applying for ACE revenue funding again – we will be independent and self-sustaining when the current funding programme comes to an end on 31 March 2015.

In 1972, short-life houses gave us access to cheap property and a lot of space. Ultimately, though, that investment is lost when properties get handed back, so we said even then that there was a need for permanency. It’s taken us 40 years to achieve that, but it’s important for us and the artists we support. Artists who get one of our long-term or permanent buildings feel they can really invest in their studio – they don’t have to worry about having to move on in a few years’ time, how the market is changing or how regeneration is affecting studio provision. It’s taken a long time to get there, and I think that is one of the things we can truly celebrate in our 40th year.

We’ve led the way in terms of creating permanent and affordable property for artists in London. But to create affordable space and for artists not always to be moved to the edges of the city remains a huge challenge for us all.