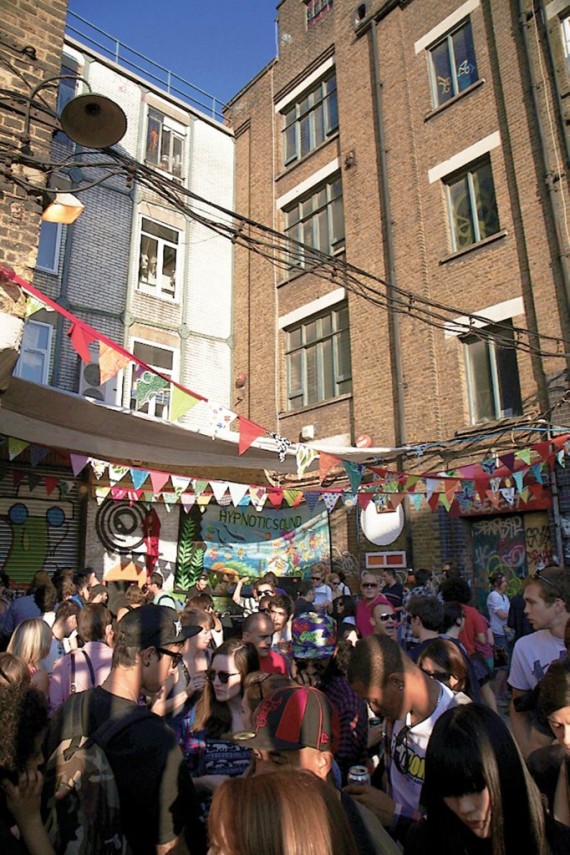 “We like to say that the Olympics stole our weekend,” says Anna Maloney, one of Hackney WickED‘s six directors. Her good natured point is a reference to the festival’s one-year hiatus in 2012 due to Olympic policing and security concerns.

Since the inaugural festival in 2008, the Hackney WickED Art Festival has always taken place on the last weekend of July. This year, however, it’s moved to mid-August, due to July’s Olympic Anniversary Celebration and Open East festival. “Next year we want our weekend back. The end of July was great,” adds Maloney.

Initiated as an exhibition to showcase the range of artists in The Wick, its audience has grown from 500 in the first year to a massive 40,000 in 2011. The festival, which is usually spread throughout Hackney Wick and Fish Island, will this year have its hub firmly in Queen’s Yard where a curated programme of performances and exhibitions will take place, alongside Fête for the WickED, a WickED Buskers Corner and Open Studios at Mother Studios.

Hackney WickED, however, is more than an art exhibition or a series of Open Studio events – it is a cultural phenomenon that isn’t easy to categorise or quantify. Aside from the official programme, in past years the streets have been awash with impromptu performances, live paintings, pop-up street kitchens, ghetto blasters, and bands playing street corners (almost every corner) and warehouse yards (again, almost every yard). It is reminiscent of New York’s Greenwich Village in its bohemian days or an anarchic DIY Berlin of ten years ago.

One gallery that has consistently presented high-quality, thoughful shows that maintain the energy and edginess of Hackney WickED is Schwartz Gallery, directed by Ismail Erbil and Patrick Michalopoulos. This year, Erbil has curated a show that in many ways draws parallels with the studio nature of the festival, contrasting finished works with those found in the artists’ studio.

Erbil and Michalopoulos, who are both installation artists, founded the gallery five years ago and have been operating in the space on a ‘gentlemen’s handshake’ with landlord Stuart Schwartz. “There are very strong artists in the area and it’s really worth coming to find out about them. This is what we wanted to do in Schwartz Gallery,” says Erbil. “We’ve really looked after the space quite well and we’ve shared it with as many people as possible. I wish more landlords would trust artists to take a space and experiment.”

With the largest per capita of artists in the world (624 studios and an estimated 1 in 7 working within the arts), Hackney Wick has recently seen massive changes. “We always knew the area was going to change because of the Olympics,” says festival co-director Laura May Lewis. “We knew it was good to create our identity as a cultural community, to made a stand. Lots of artists have moved out of their studios but there have been new pockets… as an area changes, the social demographics change too.”

OpenVizor came on board as an early sponsor of Hackney WickED in 2009 and has collaborated ever since. “We got the feeling that there was a village here. There is a strong sense of people coming together,” says OpenVizor’s Abbas Nokhasteh. His involvement in the area extends beyond the festival to working with the Hackney Wick Community Festival and supporting Hackney WickED’s education programmes. Alongside directors from Hackney WickED, Nokhasteh is also part of the Cultural Interest Group that was set up in 2009 with the aim of encouraging a permanent and sustainable creative community in The Wick and Fish Island.

Hackney WickED’s embedded engagement with the area seems even more remarkable once you learn that it is a labour of love for the festival’s directors. The cost of managing the infrastructure, from security to clean-up, takes up the majority of the small budget the organisation has. Although the London Legacy Development Corporation has put £5,000 funding towards these costs, the group hope that in the future they can deepen the collaboration and be a core part of the Open East festival.

“The cost of the festival has gone up dramatically but there is a hope it will become sustainable,” says Lewis. This longterm aim has been kickstarted by a current crowdfunding campaign – its goal is to raise an additional £7,500 by 31 August. “In the future we’d like to have enough income to pay people to run the festival and also link up international artists’ exchanges, and have more money to commission artists.”

“It’s been blood sweat and tears,” adds Maloney. “Every director you speak to has had to give up jobs to put it on. You may think we’re crazy, but we’re passionate about it.”