Haroon Mirza: "It's like being on a world tour" - a-n The Artists Information Company 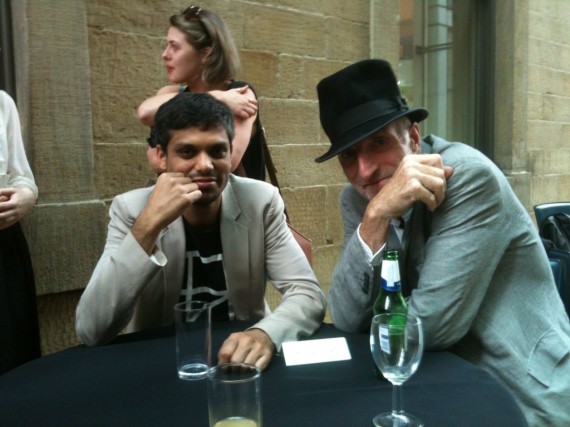 For artist Haroon Mirza, it was a chance to reacquaint himself with his 2008 work, A Sleek Dry Yell. For Manchester Art Gallery, it was the official launch to celebrate its purchase of the piece. And for Richard ‘Kid’ Strange, it was another opportunity to talk menacingly into a loudhailer while pacing purposely around the gallery.

“It’s great that myself and Richard can get together and do this,” said Mirza. “The work is not just the installation, it’s the performance too. And Richard is as much a part of A Sleek Dry Yell as I am.”

Mirza’s piece – a sculpture that uses old furniture, flowing water, a Casio keyboard, speakers and video footage of Strange to create a complex sound composition – was jointly purchased in May by a partnership of five galleries that also includes Manchester’s Whitworth Gallery, the Walker and Victoria galleries in Liverpool, and the Grundy in Blackpool. The acquisition was made possible by the Contemporary Art Society’s Sculpture Fund.

Commenting on the piece, Mirza said: “It was the first work I made when I came out of art college. It was made in a tiny studio in Sheffield on a £400 budget from Generator Projects in Dundee.

“I can’t ever let go of it, there’s always a real desire to change it or develop it somehow, but it’s impossible to do so when you can’t get your hands on it. I did notice a couple of things tonight that were incorrect though, so I just had to tweak them!”

Mirza’s career has moved at a startlingly fast pace over the last couple of years. He won the Northern Art Prize in 2010 and, most significantly in terms of his international profile, was awarded the Silver Lion at the 2011 Venice Biennale. In June he won the Daiwa Anglo-Japanese Foundation prize.

“I guess things are happening very quickly and it’s quite extreme at times, just not being at home and travelling,” he said. “But what any artist would wish for is to show their work, and as long as I can develop work and it keeps moving forward, it’s all good.”

Although often described as Sheffield-based, Mirza also has a studio in London and is planning to make this his main production centre. He has interesting plans for his Sheffield studio at S1 Artspace, which he currently doesn’t have access to due to “a health and safety issue”.

“The plan for the Sheffield studio is to open it up for residencies,” he said. “There’ll be an open call for artists and they’ll be able to use the space, the materials and the equipment, everything that’s there, basically.”

Mirza’s main focus at the moment though is the raft of exhibitions he’s currently working on: “The next big thing is a show in New York in September; and there are shows at The Hepworth [Wakefield] and mima [Middlesbrough] next year. The Hepworth is a really major project that I’ve already started working on, and the work for New York is currently in production in my studio.

“There are some other projects here and there, like a biennial in Korea, also in September, and I’ll be going to Japan for about a month and a half, too. So it is a bit like being on a world tour!”

A Sleek Dry Yell will also be undertaking its own, rather more modest, tour. It will be shown at the funding partnership galleries in Manchester, Liverpool and Blackpool later in 2012 and next year.