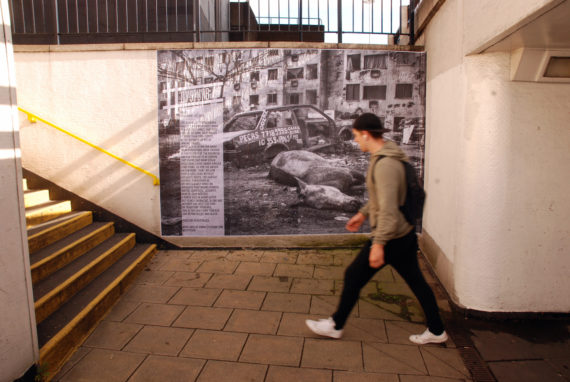 “It felt like we were being shat on,” says Charlotte Gregory, director of artist-led space The NewBridge Project, explaining the general consensus that led to the concept behind ‘Hidden Civil War’, a month-long festival taking place across Newcastle  upon Tyne throughout October.

Stemming from a gathering of artists and activists in Liverpool 18 months ago called by social activist Chris Erskine, it was clear from the meeting’s ensuing conversation that there was a shared urge to inspire change.

The ‘Hidden Civil War’ festival includes artworks, performances, public-realm interventions, talks and film screenings from internationally-renowned artists and activists. The aim is to “expose, collate and present evidence” of an unspoken civilian conflict on the streets and in the homes of Britain today. 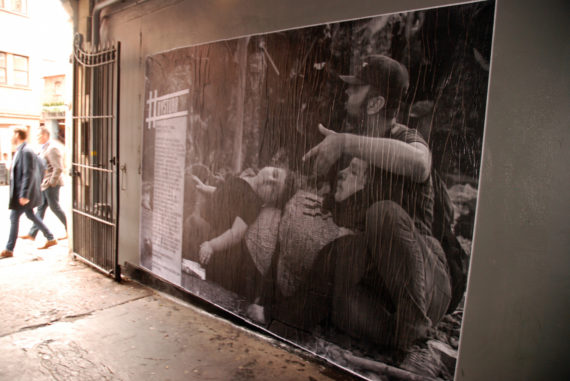 Inside the heaving exhibition space, Craig Ames’ four-screen video work Green & Pleasant Crammed juxtaposed an inverted Union Jack flag – understood as a sign of distress – with language commonly found in newspapers in the run up to the EU referendum. Single words such as ‘Jobless’ and ‘Swarms’ referenced the highly charged rhetoric of the Brexit campaign.

Richard DeDomenici’s increasing disillusionment with traditional forms of mass protest has resulted in the discovery that most people are happy to accept balloons displaying subversive messages. 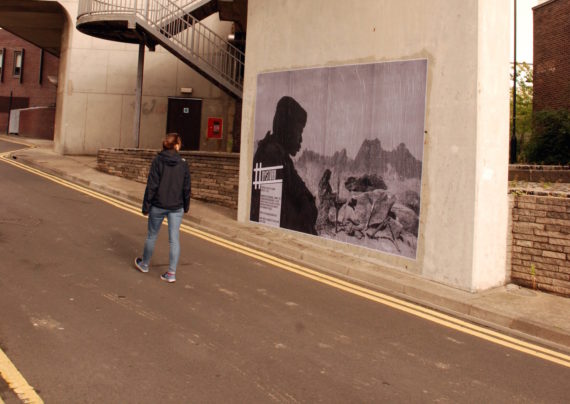 For ‘Hidden Civil War’ he collected slogan ideas from people in Newcastle city centre and via social media, before giving the balloons away in the streets and at the opening. ‘My Marxist Feminist Dialectic Brings All The Boys To The Yard’ was the most popular balloon on Friday night – DeDomenici’s exhibition at The NewBridge Project continues until 29 October.

A large portion of the festival’s programme takes place on the city’s streets, reflecting what Gregory describes as a desire to avoid staying in its “own little art bubble”.

Walking into the city centre via the underpass beneath the 55 Degrees North apartment block on Pilgrim Street, you are confronted with a billboard-sized photo of refugees making a forced entry into the Port of Calais, and another of families living in poverty in makeshift homes in Brazil.

These are part of a new series of images by global photojournalism collective #Dysturb, the first time the group has exhibited in the UK. The streets of Newcastle are used to depict hidden civil wars in the international community and show issues including sexual-based violence, displacement, tax evasion and pollution.

Accompanying the festival is The Precariat newspaper, available as a print edition and on issuu.com.