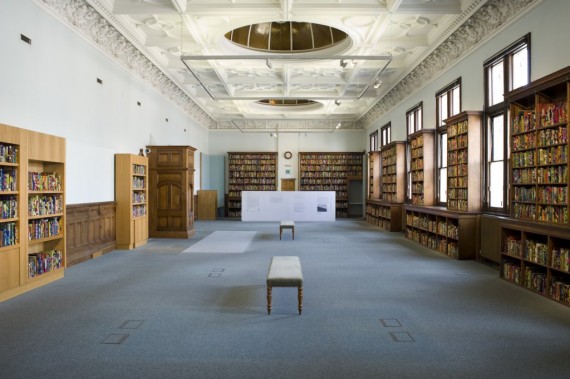 Now in its sixth year, the HOUSE festival in Brighton & Hove provides a welcome high-level visual arts input to the annual Brighton Festival, which is performing arts based. HOUSE directors Judy Stevens and Chris Lord have developed a specific commissioning and presentation model that works successfully. It’s based on direct invitation to one high-profile artist whose work sets a broad theme for up to five other artist commissions, selected through an open call. Its other distinction is to site the commissions in a range of locations, some of which are existing visual arts venues, while others are more unusual sites.

This year’s headline show is The British Library, an installation by Yinka Shonibare MBE at Brighton Museum & Gallery. 10,000 reclaimed books have been re-covered in Shonibare’s trademark wax cloth, the design of which references Indonesian culture and Dutch manufacture. Inscribed on the spines of some are the names of individual immigrants who have made significant contributions to the cultural identity of Britain.

Some names are unexpected, such as Noel Gallagher (surely born in Manchester even if his parents were Irish) and Mick Jagger (born in Kent with an Australian mother according to Wikipedia). Does this stretch the point somewhat? Other names are more obvious, for example Henry James and Kazuo Ishiguro.

The books have been installed on the shelves of the Old Reference Library, a large wood-panelled room in the museum. The accompanying print information suggests that ‘The British Library prompts us to evaluate our attitudes to immigration and immigrants and consider our own understandings of territory and place, cultural identity, displacement and refuge’.

This oversells it, I think. The resonances are immediate, the concept is easy to understand and it’s visually very pretty. But it seems too simple, with the execution relying on volume and site rather than engagement and genuine intellectual provocation. Signs ask visitors not to touch the books, but it would meet its purpose better if the installation allowed more visitor interaction through the ability to leaf through books, perhaps via specific volumes strategically placed on library tables. As the fourth generation of an immigrant family I found it disappointing.

Considerably lower budget but more directly effective is No One Owns The Land, an installation in the basement of The Regency Town House in Hove, by artist-makers Ester Svensson and Rosanna Martin. The murky, grimy depths of the house is the perfect placement for these exquisite small sculptures that through both abstract and figurative representations evoke boundaries, movements of people, conditions of migration, and caretaking of land, rather than its ownership. Visitors make their own journey of discovery as they trace the works through the small rooms and larders of the servants’ domain in this grand house.

In Salt Field at The Waste House (an eco-project sited at Brighton University), Phillip Hall-Patch continues his meditation on the properties, politics and desirability of salt. He has installed a floor of ready-made industrial salt blocks over which hangs, literally, a drip – a metal tube attached to a bag of water allowing one drop of water every five seconds to fall on the salt beneath. It is gradually wearing away the surface of the blocks underneath, revealing crystal formations and creating a new surface and visual experience.

The salt blocks are beautiful; bricks of pure grainy white, dense, solid, symmetrical, satisfying. Upstairs are some glossy close-up prints of salt crystals and a useful narrative about Hall-Patches fascination with the mineral. Be warned – the Waste House is tricky to find, but it’s worth the effort.

Also showing at the university is the Swiss artist Zimoun, in a Brighton Festival commission. A joyful show of kinetic sound and mechanical movement, in the main gallery 80 cotton balls thump rhythmically against 80 empty cardboard boxes. And while you’re in the area, around the corner in the derelict Circus Street building is another Brighton Festival commission, Nowhere and Everywhere at the Same Time No. 2 by choreographer William Forsythe. It’s a gentle, meditative piece and I liked it.

My reception was problematic though. On my first visit a door attendant told me: “This is a private view and it’s not open to the public till tomorrow. Come back then”. This left me utterly horrified at the elitest values and message embedded in this statement. The second time was not much more welcoming, with the order to leave my bag at the side “at your own risk. We can’t take responsibility”. It’s a Brighton Festival problem that they need to fix.

There are two other HOUSE commissions. One is Caste/Cast by Leah Gordon, also at The Regency Town House in Hove. The other is The Monopoly of Legitimate Use by Tobias Revell at Lighthouse, in the centre of Brighton. Revell describes himself as a ‘critical designer and futurist’, and in recent years Lighthouse has focused far more on digital culture than visual art; I’m hoping this might change with the recent appointment of new artistic director, Juha van ‘t Zelfde.

Previous HOUSE festivals have seen an exhibition in a shipping container on Brighton seafront; outdoor work by David Batchelor in Brighton’s Bartholomew Square; and the Circus Street building used by Anish Kapoor. This kind of intervention may not sound like much for towns like Folkestone or Whitstable, with their now established triennial and biennial; or larger cities like Liverpool, Manchester and Glasgow. But for Brighton, where the visual arts has traditionally been the poorer relation to the performing arts, HOUSE is a pretty big deal.

HOUSE 2014 continues in Brighton & Hove until 23 May. www.housefestival.org