Is this how art works? - a-n The Artists Information Company 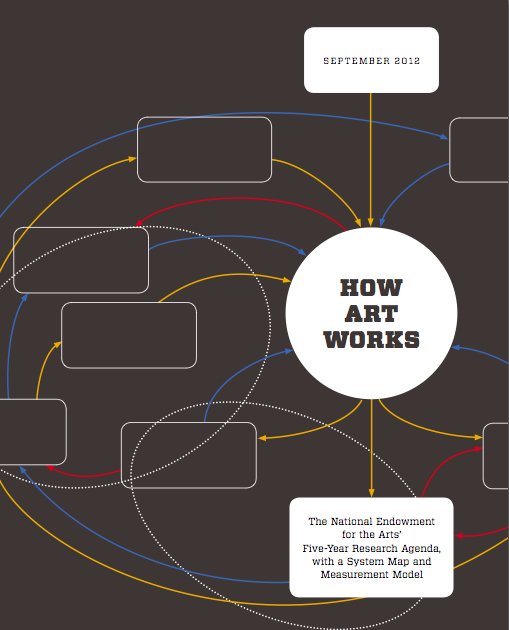 The National Endowment for the Arts (NEA) in the USA have just published How Art Works. It’s essentially the organisation’s research agenda for the next five years, based on a systems map and measurement model setting out how they think art works.

The map – which rests upon a belief that ‘the arts are a dynamic, complex system’ and therefore with multiple entry (and exit) points and different perspectives according to the individual – places arts engagement at the heart of how art works, with what they call ‘the raw fuel’ coming from ‘the human impulse to create and express’. The benefits are to individuals and to communities, and to various other fields including the economy.

Some people will find the system map and the various illustrations of how you might measure what is happening in the system too complicated. For others it will be too simplistic and lacking in nuance. I find it a good framework for thinking about not just whether art works, but how and when.

This has always been an Achilles’ Heel for arts advocates, replete with assertions and armed with evidence, but lacking what you might call ‘theoretically plausible causality’, rather than just correlation between arts activity and anything from regeneration to mental health. Educationalists and business leaders have created that plausibility in ways the arts have failed to – for example, ‘studying and passing exams leads to you getting a good job’.

All maps have limitations and elide or scale reality. (Unless you count the Boyle Family’s World Series as maps, I guess.) For me, the ‘human impulse to create and express’ needs to encompass both artists and people who don’t define themselves as such, and is rather under-examined. What is its relationship to what the paper calls ‘societal capacities to innovate and to express ideas’, for instance? Is that human impulse as universal and eternal as we might like at times to think? Are the forms it takes? Where do power, money and class sit in this?

I also think that whilst seeing ‘arts infrastructure’ as an input, alongside ‘education and training’ – ie, something to make art work, not the end result in itself – is positive, there is something missing that also helps to enable arts participation and creation, the engine of this system. This feels as if it’s to do with our broader civic or cultural training and capacities – that bit lying outside of ‘art’ and ‘education’. (There are indeed such places, I believe.)

Finally, I think there is more to be done to understand what is happening in the connections between individual, societal or community benefits and economic benefit. Those aspects don’t seem so independent as the map suggests. (That economic framing is understandable, given the context of the NEA, but limiting.)

Regardless of imperfections and quibbles, this is nevertheless an important and stimulating paper. We should get our heads around it, given the increasing convergence of US and UK thinking. 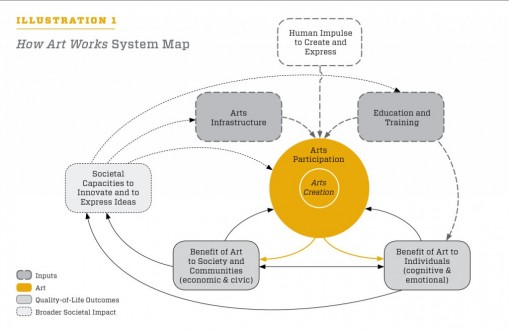