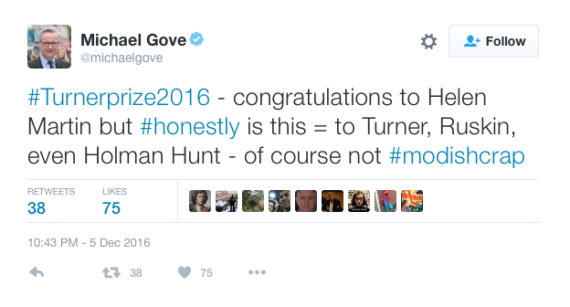 Michael Gove’s anti-Turner Prize tweets are childish The Guardian’s Charlotte Higgins responds to the Tory MP’s dismissal of Turner Prize winner Helen Marten’s work as ‘modish crap’, as the Brexiteer and former education secretary shows himself up with his bad spelling and shaky grasp of art history.

Shanghai removes sculptures after UK artist cries plagiarism Three sculptures located in a park in Shanghai have been dismantled after UK artist Wendy Taylor claimed that one of the works was a copy of her sundial sculpture, which is located on the banks of the River Thames in London.

Francis Alÿs to create new work inspired by his frontline experiences in Mosul The Belgian artist’s wartime commission will go on show in the Iraq Pavilion at the 57th Venice Biennale next year. The work will be based on his recent experiences spent on the frontline in Mosul, northern Iraq, as part of the ongoing military offensive against Islamic state (Isil) militants.

Fire at California artists’ collective claims 33 lives The building had been under investigation by city officials for safety violations, and was zoned to serve as a warehouse only, not as a living or event space. The fire, one of the deadliest in the US in a decade, broke out during an electronic dance party late on Friday night, and quickly spread to engulf the entire building.

Turner-winning artist Martin Creed to release Christmas anti-carol It’s You offers antidote to the commercialised positivity of Christmas, with the accompanying music video (above) on show in the window of the Hauser & Wirth gallery in London’s West End.

Putin promises to halt censorship of artists in Russia The Russian president calls any interference with theatre or exhibitions “absolutely inadmissible” during meeting with film directors and artists, vowing that he would protect artistic freedom in Russia. Artists had appealed to Putin about their concerns relating to the power of conservative groups and recently censored arts shows.

Jan Fabre accused of animal abuse for exhibition at Russia’s Hermitage Museum The Belgian artist has upset animal rights activists and Russian Orthodox fundamentalists over his exhibition ‘Knight of Despair/Warrior of Beauty’ at the Hermitage Museum in Saint Petersburg. The show features works made from taxidermied roadkill, such as rabbits, birds, dogs, and cats.

Artist Kader Attia files plagiarism lawsuit over French rap video YouTube has taken down a music video for song by the French rappers Dosseh and Nekfeu after Attia files a lawsuit claiming it plagiarises one of his works.