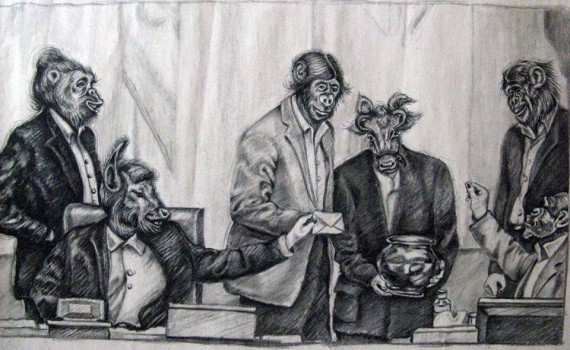 The Iranian artist Atena Farghadani has been sentenced to 12 years and nine months in prison by a court in Tehran. The tough sentence follows her arrest in August 2014 for drawing a cartoon that caricatured members of parliament as monkeys, cows and goats as they cast their votes for laws restricting women’s access to contraception.

Farghadani, whose trial began on 19 May, faced charges that included ‘insulting members of the parliament through paintings’, ‘spreading propaganda against the system,’ and ‘insulting the Supreme Leader’.

Amnesty International has stated that the 28-year-old artist’s sentence is “far in excess of the statutory maximum punishment for the charges she faced”. The organisation adds: “Atena is a prisoner of conscience – she has committed no real crime. She is being unfairly punished simply for exercising her right to free speech, association and assembly.”

The organisation is calling for her release and has been campaigning for her to be freed since her original arrest. She was previously released from prison last November, but then re-arrested and imprisoned six weeks later. While released, she posted a YouTube video describing her ongoing interrogation while in prison and also spoke to the media. 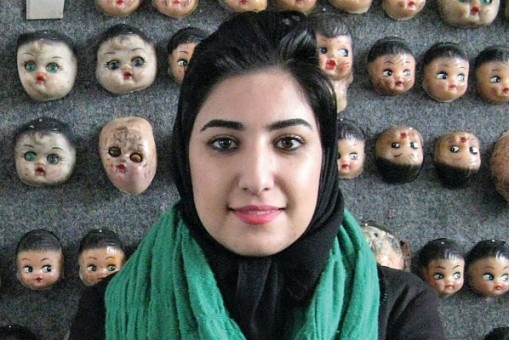 The report from Amnesty International also states: ‘While in prison last year, Atena flattened paper cups to use them as a surface to paint on. When the prison guards realised what she had been doing, they confiscated her paintings and stopped giving her paper cups.

“When Atena found some cups in the bathroom, she smuggled them into her cell. Soon after, she was beaten by prison guards, when she refused to strip naked for a full body search. Atena says that they knew about her taking the cups because they had installed cameras in the toilet and bathroom facilities – cameras detainees had been told were not operating.’

Amnesty International also reports that Farghadani went on hunger strike earlier this year in protest at her treatment. The organisation states that her lawyer informed them that her health had suffered greatly because of this and in late February she had a heart attack.

Speaking to the Washington Post, the Iranian-American artist Nikahang Kowsar said: “Atena is being punished for something many of us have been doing in Iran: drawing politicians as animals, without naming them…

“What Atena drew was just an innocent take on what the parliamentarians are doing, and based on the Iranian culture, monkeys are considered the followers and imitators, [and] cows are the stupid ones.”