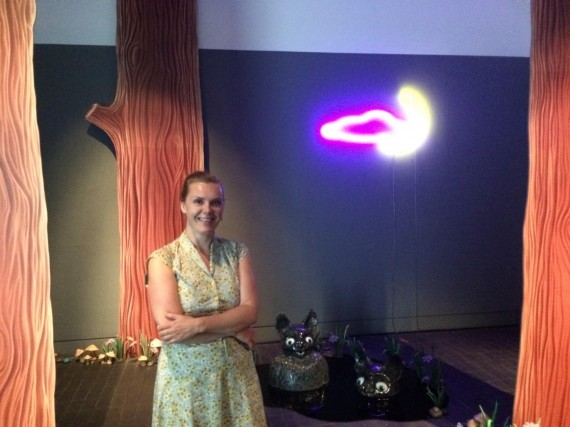 This week sees the opening of the Jerwood Makers Open, an exhibition exploring how contemporary artists are defining or challenging the boundaries of what has traditionally been described as applied arts.

Located at the Jerwood Space in Southwark, London, it features new work by five artists: Zachary Eastwood-Bloom, Malene Hartmann Rasmussen, Jasleen Kaur, Ian McIntyre and Silo Studio. Selected from over 267 UK-wide applicants, each received awards of £7,500 at the end of 2014 to realise significant new projects.

They were chosen by an independent panel comprising Grant Gibson, Editor of Crafts magazine; Isobel Dennis, Director of New Designers graduate design exhibition; and Michael Marriott, product designer and curator. The result is an exhibition that’s as diverse as they come, with work ranging from a ceramic wall made from cubes and a mixed media installation to busts cast in hand marbled plastic.

For ceramicist Malene Hartmann Rasmussen, the standard of her fellow exhibitors simply adds to the sense of achievement. She said: “It’s fantastic. I’ve applied a couple of times and not got in so it makes it extra special, particularly because so many people applied this year.”

The award of £7,500 was crucial to realising her work. “I’ve never had so much money to put into an exhibition before. It helped pay for assistants to help me install and I’m really pleased with the final result.”

Fellow artist and ceramicist Zachary Eastwood-Bloom also felt the benefits of the award. He said: “Receiving such a hefty amount of money allowed me to focus for six months on the project. I wanted it to be really ambitious and I feel the final work reflects this.”

As with Rasmussen, Eastwood-Bloom had applied several times before without success. However he felt the process was still beneficial, urging other artists to apply.

“You have to be quite tough and getting rejected is hard. However, applying for opens such as these provides focus to create work and develop your practice. Ultimately it is a learning process but an incredibly positive one.”

Does the show reflect a growing community placing significance on making and materials within the visual arts arena? Eastwood-Bloom certainly thinks so. “I actually share a space with Rasmussen called Studio Manifold so in that respect there are little pockets cropping up. ‘Applied art’ is a label – I’m  just focused on creating good work.”

Over the past five years the Jerwood Makers Open has awarded commissioning funds totalling £180,000 directly to artists. This has supported 24 major new commissions, offering opportunities for artists to freely develop creative ideas central to their individual practices.

Jerwood Makers Open, 10 July – 30 August 2015, Jerwood Space, London. The exhibition will then tour to venues including The Gallery at Plymouth College of Art , Plymouth (more venues to be announced). jerwoodvisualarts.org

2013 – How was it for you? – Jerwood Charitable Foundation director Shonagh Manson looks back on 2013, a year of exciting collaborations