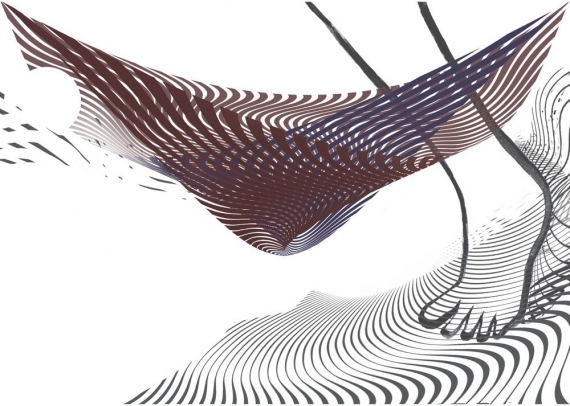 “We’re all runners now. So I’m a runner too. We’re on this deck, this deck that just goes on for miles, and the deck is around the edge of a floating city.”

So intones an anonymous woman with an American accent in Adam Chodzko‘s Rising: The Future of the Race – a 20-minute sound piece imagining a future Great North Run, where Newcastle has become a city submerged in water.

This eerie, future-gazing piece of work forms part of the cultural programme of the Great North Run, which this year takes place on Sunday 15 September. Runners (and the rest of us) will be able to listen to the piece on Tyneside Cinema’s basic.fm, where it will be broadcast for 24 hours from 11am on the day of the race. It is also available now as a podcast.

Rising was co-commissioned by Invisible Dust and Great North Run Culture and is Chodzko’s first-ever radio broadcast. Working with award-winning sound designer Tim Barker and actress Gretchen Egolf, Chodzko links the psychology of running with the issue of climate change, taking as his cue for the piece the events of 28 June 2012, dubbed the Newcastle Monsoon, when a month’s rain fell in an hour, causing flash flooding and bringing the city to a standstill.

Great North Run Culture was established in 2005 to mark the 25th anniversary of the world’s largest half-marathon (over 50,000 runners took part last year). There are three other cultural commissions for this year’s programme. Tracer, by Melanie Manchot, is a film installation at BALTIC 39 which follows a group of Parkourists around Newcastle, providing an alternative view of familiar landmarks.

At the Laing Art Gallery, Daisy de Villeneuve presents her exhibition, Run Colour Run, featuring behind the scenes portraits of participants at last year’s run. And at Sage Gateshead on Saturday, the day before the race, Maximo Park singer Paul Smith presents a new choral work, A mind full of nothing but continue.

Full details of the Great North Run Culture programme are at www.greatnorthrunculture.org