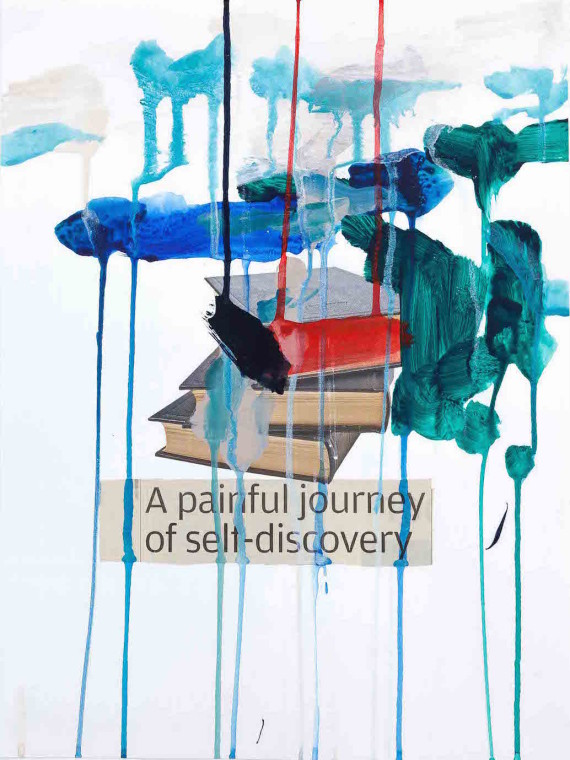 The glue that holds many art communities together was sadly evident by the sheer numbers who attended the funeral on 15 April of the Scottish artist Kevin Hutcheson.

Over recent times many have tried to fathom the ‘success’ of the Glasgow art scene. We roll our eyes and try to explain; it’s not a ‘thing’, it’s what you put in, over time, to friendships, to your practice, loyalty and the time invested to support peers. Kevin embodied this and would turn up for a friend’s launch on time, with his own beers and a knowing smile.

Kevin studied Fine Art at Duncan of Jordanstone College of Art and Design, graduating in 1997. He gained his MA at Chelsea in 2002 and lived and worked in Glasgow. From my desk I can see his studio block, the Glasgow Independent Studio. It sits above other Glasgow institutions: Transmission Gallery, Street Level and the Glasgow Print Studio. His studio was set back from the external window, otherwise we would have had the same view. From the Print Studio or the street, Kevin would see my light on and send a text to see if I wanted a coffee.

Kevin mastered his art form early on, earning him the endearing nickname Mr Collage in the early ‘90s at Duncan of Jordanstone. Collage provided both the material and the philosophical basis of his practice.

As in the tradition of collage, Kevin’s art was being made well before the glue was applied; the thinking, listening, selection, the cutting, are as descriptive and deliberate within the final image. Kevin assembled images and text to articulate his own voice using a collective language sourced from the media and the street. He would reflect upon the changing nature of communal narratives by observing, listening and identifying the personal and reference points pertinent to our cultural history.

In Journey – which reads: ‘A painful journey of self-discovery’ – the text is cut roughly and stuck under a carefully trimmed picture of a pile of books (which could be great literature, poetry or a pile of self-help manuals). What’s important are the layers, the gathering, the process of making art, the way each element has been put together – this isn’t the artist’s ‘journey’, it’s a path crafted by the artist that recognises what it feels like to be in the world. 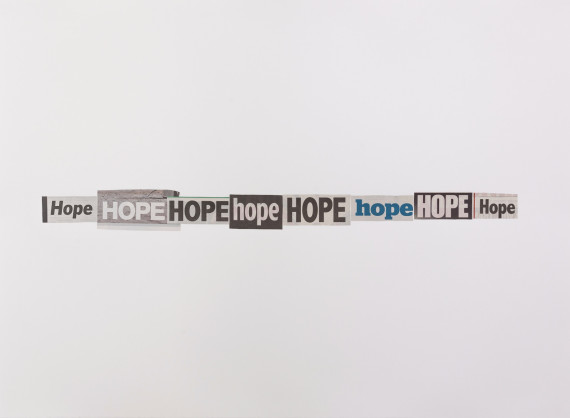 Writing in the Scotsman, Moira Jeffery said of his 2013 solo exhibition: ‘Hutcheson’s show is a precise and canny skewering of words and things in the digital age’. The show referenced many complex ideas delivered with skill and confidence. Ranging from gang culture, advertising and self-awareness, the work resonated with the rise of digital culture as well as a post-digital comedown alongside the demise of print journalism. The piece, Street, which places multiple cuttings of the words ‘Hope’ against each other, was made in the gallery as Kevin was installing the exhibition.

Following the exhibition, Kevin received a Creative Scotland Artists’ Bursary to give him time in the studio to develop his work – in particular to be able to pay for time in the Glasgow Print Studio and to start thinking about creating a book of collage.

Coloured acrylic paint was often used by Kevin to highlight a detail in type. Latterly, he was introducing it as another layer of collage, strategically placing the painterly marks by pressing the paint tubes directly onto the paper, or in the series, Sand, using brushes on sandpaper, which featured in his most recent, posthumous solo exhibition at Glasgow International Festival of Visual Art. Titles are important in the reading of Kevin’s work and support the understanding of each piece. The GI exhibition showed new work without words or headlines; some of the titles are unknown – without them, the work continues to display a compassionate intellect channelled into every detail.

Despite his impressive exhibition history and the command of his fluid and elegant visual language, I believe as an artist Kevin was just getting into his stride.

He will be remembered as a loving son to Rose and Robert, a valued family member and a true friend to many. As an artist his commitment never wavered – an artist’s artist, a gentleman. His legacy will see him positioned as a leading figure of his generation of artists. Above all, the complexity of Kevin’s work is simply joyful. Knowing Kevin as a friend and working with him as an artist has been a privilege. 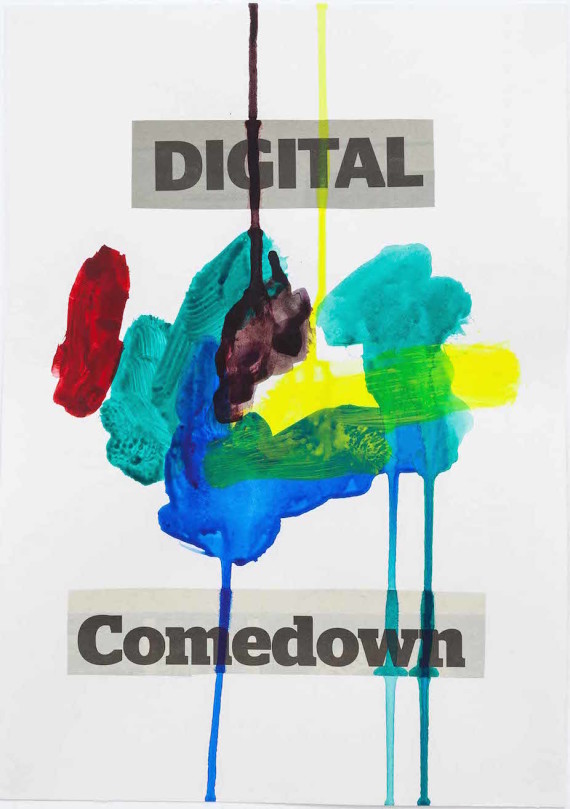 Other tributes to Kevin Hutcheson

For me, Kevin’s collages, paintings, sculptures and prints combine a great affection for pop culture with an outsider’s fascination with the pleasure that comes from it.  The effect this produces is melodic and at the same time strangely dissonant. There is a joy and precision to the way he puts things together but his works contain other tensions and, occasionally, a jarring sense of place. It’s his ability to balance all of these things that makes them special.

Visiting his studio you would be put to shame by his work ethic. It was plain the simple satisfaction he took in making art. As a friend, Kev was loyal, warm, deadpan funny, and most times would tell you exactly what was on his mind. I loved him and will miss him. My heart goes out to his family, especially his parents Robert and Rose.

Kevin Hutcheson was one of the wave of Duncan of Jordanstone graduates who moved to Glasgow in the 1990s, having been at art college in Dundee, and then to Chelsea School of Art in London for a Masters degree. Originally from Blantyre, a small town in Scotland’s industrial heartland, he went on to achieve much.

Kevin was a very genuine, understated and unassuming person, with a subtle strength of character, quietly confident in his own abilities. We once had a conversation about ‘self doubt’ as I was having issues with this at the time. In contrast, Kevin was resolutely sure of the direction his work was taking. In that way he was quite an inspiration. Kevin’s artwork reflected his quiet stoicism, its seeming simplicity of execution achieved through a consistency of approach and concentrated consideration.

About ten years ago I undertook a short residency for South Lanarkshire Council based between Chatelherault Country Park (the Duke of Hamilton’s hunting lodge) and a community hall in a housing scheme in an area of Blantyre near to where Kevin had grown up. We talked a lot about his home town and the contrasts I was experiencing first hand. I think he was quite amused at my interest in this overlooked town, which was obviously very close to his heart.

More recently, Kevin took part in several low-key group exhibitions I curated in my flat and in record shops, and he approached these with the same amount of thought and meticulous attention to detail as he would have done with a show in a far more prestigious situation.

For Kevin, it seemed like art was his whole life, whether it was through his diligent preoccupation with his own practice or his overriding interest with the art scene in general. He was a consistent figure at exhibition openings and art-related social gatherings, and our paths crossed regularly. He was easy to talk to, and always interested in what others were up to.

Kevin’s opinions were always well considered and perceptive. It’s particularly sad that the timing of Kevin’s death was just prior to the opening of his solo show for Glasgow International 2016, which he would have thoroughly enjoyed being part of. Myself and many others will miss his friendly face and down to earth attitude. A quiet star of the Glasgow art scene has left the party far too soon. 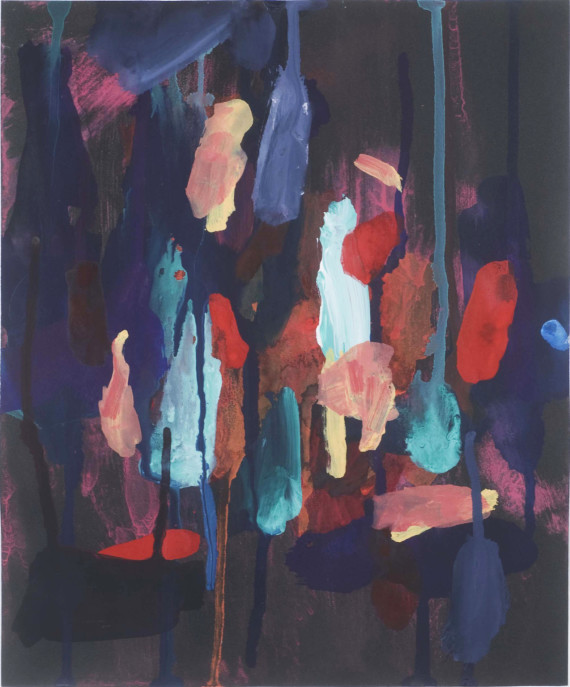 Kevin was a friend and important artist in Glasgow. I think amongst everybody he’s been to literally all of the gallery’s openings. Kevin’s great characteristic was that he always engaged in a discussion about the work – it wasn’t just a ‘Hello, how are you.’ He was a true believer and was genuinely interested in what the artist was trying to do.

Kevin was always around and always very charming and engaging. It is a great loss to the scene in Glasgow. Hopefully, GoMA and Scottish National Galleries will recognize this and finally collect his work.

Kevin was a dear friend who came from Blantyre to study Fine Art in Dundee back in 1993. I met him on our first day, and already he appeared to me a fully-formed artist. He’d been in bands – Subliminal Girls – and loved visual art, but also film, literature and music. We quickly became friends and over the years discussed and debated art, how it could be made and its place in the world and our lives.

There are many anecdotes I could relate here, and it’s difficult to share them knowing Kevin’s no longer with us. I remember crashing over at his flat one night and he played a VHS recording of Lou Reed and John Cale’s Songs for Drella performance. It’s bound up for me in being half awake, but I can still remember Kev working away in the room – probably making a new collage or writing – as I drifted off to sleep. Kevin – the ‘master of collage’ – would have liked this memory. It’s warm and gentle, as he was.

Kevin was kind and generous – even when financially he often had little. He had the ‘Hutch touch’ – his A4 collages exude a sensibility of poise, sensitivity and lightness of touch. Kev’s idiosyncrasies are legendary – one of my favourites was how he would never lift a stylus, or stop a CD mid-way through a song. I think that this self-imposed rule was about respect for whatever he was playing; that good art of any genre should be engaged with properly and in its entirety.

Of course, this approach is out of step with today’s super-connected and high-speed world. Kevin never compromised though – he was a dedicated artist, and loyally supported the many artists he knew and respected in Glasgow and beyond. He’s sorely missed.

Print in aid of Epilepsy Scotland 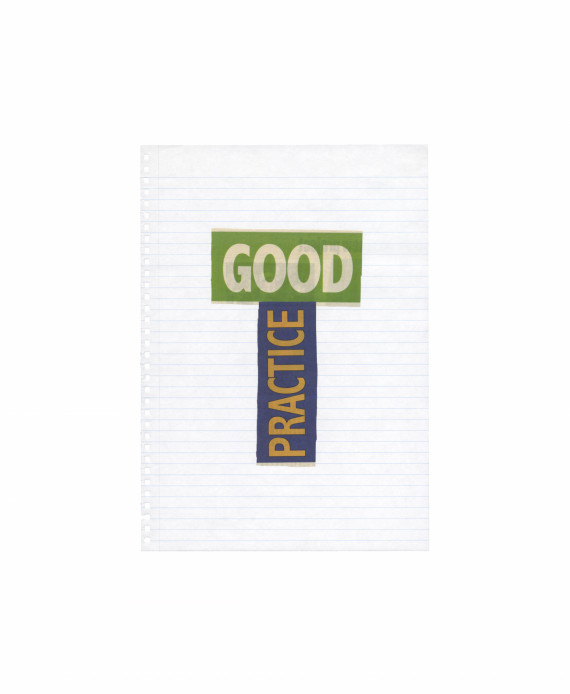 A limited edition print by Kevin Hutcheson has been produced with all profits going to the charity Epilepsy Scotland.

Method (pictured above, 2016, digital print, 42 x 51 cm, edition of 50) was originally commissioned for Glasgow International 2016 but held back following the artist’s death.

The print costs £85 plus postage and is available by contacting Patricia Fleming Projects on: [email protected]