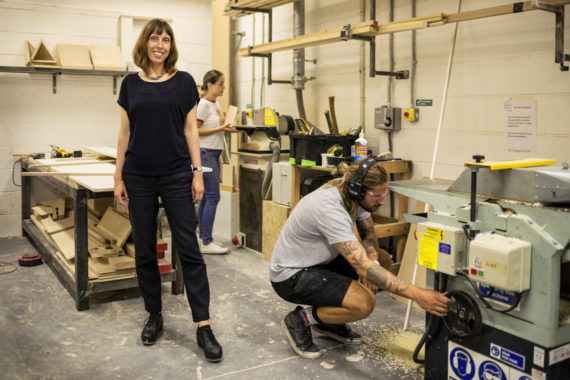 Edinburgh Sculpture Workshop has announced its new director will be Laura Simpson, who will take up the position on 1 October, leaving her current role as programme and facilities manager at Hospitalfield, Arbroath.

Simpson is known for her interest in film and is on the board of Berwick Film and Media Art Festival as well as the jury for the Margaret Tait Film Award. She has conducted research into the presentation of German and UK video art, including trips to European Media Arts Festival, Osnabreuck, NBKV, Berlin and Hoche Schule fur Bilde Kunst, Braunschweig.

Her other previous roles include being an assistant curator at Cooper Gallery at the University of Dundee between 2007 and 2013.

Commenting on her appointment, Simpson said: “I’m pleased to be taking up this role at Edinburgh Sculpture Workshop, an organisation which has experienced an extraordinary transformation with the team led by my predecessor Irene Kernan. My focus now is on securing the organisation as an engine for production, an internationally relevant leader in the critical and practical aspects of sculpture practice in its widest sense.

“I look forward to working with the many communities which make up the organisation and its audience, not least the membership who are at the heart of the organisation, and to building a dynamic network of partnerships with other organisations.”

Edinburgh Sculpture Workshop was set up in 1986 by a group of sculptor graduates from Edinburgh College of Art. It was an artist-run organisation for a number of years before launching a capital campaign for a new building in 2003. £3.6m was part raised by funding from Creative Scotland, and a land gift from the City of Edinburgh Council resulted in the Bill Scott Sculpture Centre being opened in June 2012.

Following an award from the Arts Funding Prize for Edinburgh, the organisation opened its new Creative Laboratories building in 2014, and the following year it signed an agreement with the University of Edinburgh to support joint working in future years.

Edinburgh Sculpture Workshop now runs 24 studios with around 30 artists, plus project space for up to 12 artists. It also runs a programme of sculpture courses, and a range of funded residency and research opportunities. Its facilities for artists include work spaces for metal, wood and mixed-media, and also a foundry for small to medium-scale casting.