Leeds Art Hostel: "Chains don't tell you about the city you're in" - a-n The Artists Information Company 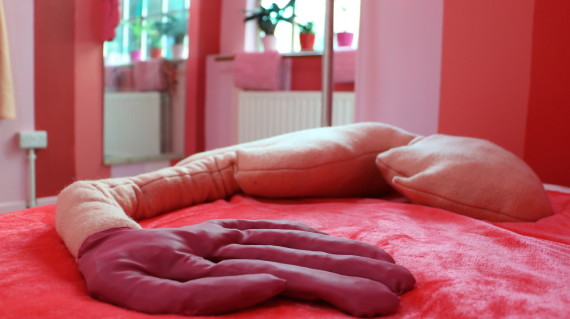 The new Art Hostel in Leeds is the first of its kind in the UK. East Street Arts has expanded beyond artist workspace provision and is leading the way with its largest social enterprise yet.

The organisation’s artistic directors Jon Wakeman and Karen Watson are seasoned cultural travellers, and their years staying in European art hostels has provided the inspiration for the project.

According to Art Hostel manager Rhian Aitken, unlike hotels and B&Bs, the hostel acts as a gateway to the more interesting, independent side of cities.  “Chains don’t tell you about the city you’re in, and it’s easy to miss out on Leeds’ thriving grassroots scene,” she says.

While there is a clear emphasis on art audiences, the Art Hostel is open to a wide demographic, catering to families, groups and professionals. Guests will enjoy affordable and smartly designed lodgings that encourage longer stays in the city, with social spaces designed to inspire conversation and exchange. 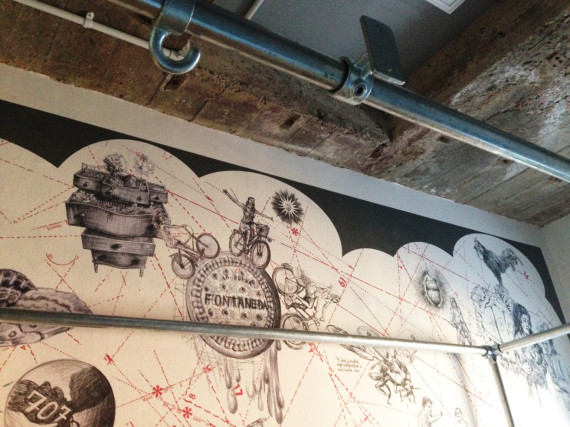 Having secured an historic building at 83 Kirkgate in the city centre, a stone’s throw from the bus and train stations, East Street Arts has worked with Bauman Lyons architects to restore the former site of a 19th-century wheat, barley and seed oil merchant. Aitken describes this as “a huge change-of-use project”, which took seven months and was financed by social investor Key Fund.

East Street Arts has a five-year lease, with the possibility of extension if the venture is successful. Aitken and assistant manager John Quinn – who have backgrounds in the service industry and hostel management respectively – are determined to keep the bookings coming in. They see themselves playing a key role as “facilitators for independent Leeds”.

Conceived as a social hub and creative space, Aitken explains that at the Art Hostel “guests are hosted in a different way”, with opportunities to meet people and get involved in artist-run events and workshops. These are held in the multipurpose basement space, which doubles as a reading room and can also be booked for private events. 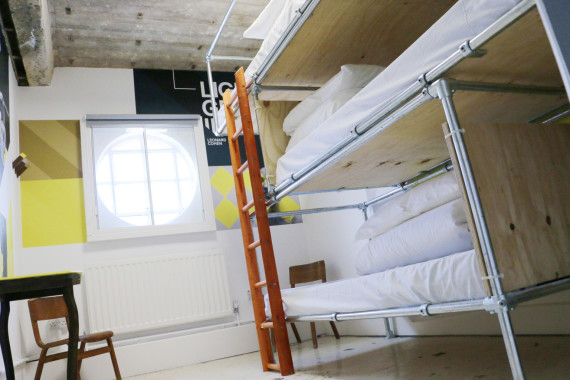 The Art Hostel has strong links to other artist-led spaces in the city such as Live Art Bistro, and with plenty of flyers and information on hand, visitors will be signposted to art spaces, independent shops, cafes and bars.

At the same time, the hostel hopes to attract international visitors, strengthening networks and encouraging collaborations and contributions to the scene. Socialising, Aitken says, is a central feature of the European hostel scene and its “unique culture of hosting”.

The hostel has a total of eight rooms and 36 beds, ranging from £22.50 for a bunk to £55 for a twin (or you can book out the whole hostel for £600, which works out to £18.50 per person). Rooms are designed by artists, designers or collectives, while stand-alone artworks can be found dotted around toilets and shared spaces.

A blend of Euro-vintage and digital swagger, deco chandeliers and a hanging basket chair sit comfortably alongside a three-channel AV work by Leeds Hackspace, a tricolour screen mounted behind the front desk, its patterns responding to noises in the room. 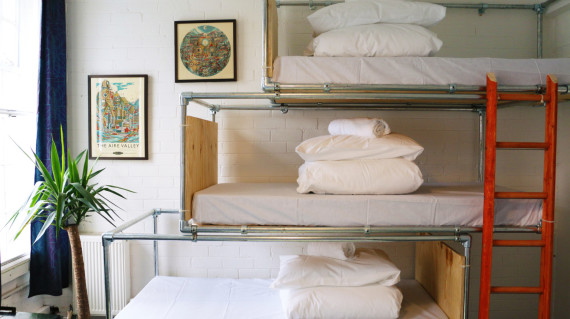 Upon entering one of the first floor toilets, guests trigger Bowie bathroom mirror, a video work by Newcastle-based artist Edwin Li featuring karaoke-style interpretations of some of the much lamented star’s famous tracks. Reflecting on the hands-on approach of East Street Arts’ directors in the commissioning and development of the work, Li commented: “They are very generous and open… genuine and authentic about what they like.”

On the ground floor, Stranger in Pink, conceived by Precious Artist Collective, is awash with colour and ‘cuddly’ features including a cerise fur-lined ceiling and a human shaped ‘teddy bear’. Rooms on the upper floors include The Fred Dibnah Suite, which showcases illustrations, prints and wallpaper by local graphic designer Drew Millward, stylised interpretations of industry and its imprint of northern city skylines.

The local history theme is continued in The Riverside Mission Room, named after a building in the nearby wharf area that was once host to community events and education programmes dedicated to ‘the social, moral, and religious welfare of the river and canal population of Leeds and District’. Hannah Stacey’s hand-cut and collaged wallpaper reflects these high-minded Victorian themes in both their content and process. 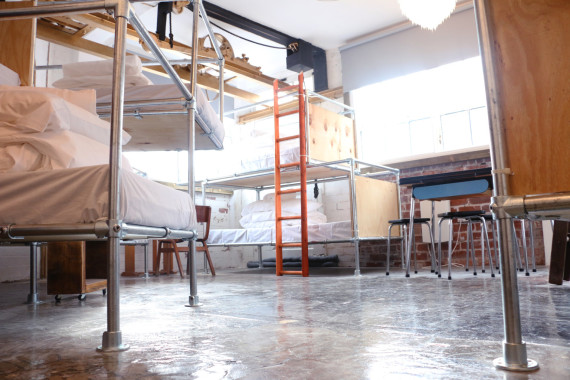 In each room, bunks resemble scaffolding with shabby-chic ladders, a DIY touch that characterises the hostel and the determined artist-led scene from which it emerges – though the beds are very comfortable. Wherever possible the original materials and features of the building have been retained, including an enormous hoist in the uppermost room that was once used to bring seeds up through a hatch, now brought back to life with lick of gold paint.

Nestled on one of the oldest streets in Leeds and filled with bespoke features, both beautiful and strange, the Art Hostel is by far the most interesting and affordable accommodation the city has to offer.

For more information on Art Hostel and how to book a room, visit arthostel.org.uk

Lara Eggleton is a lecturer, art writer and historian based in Leeds.