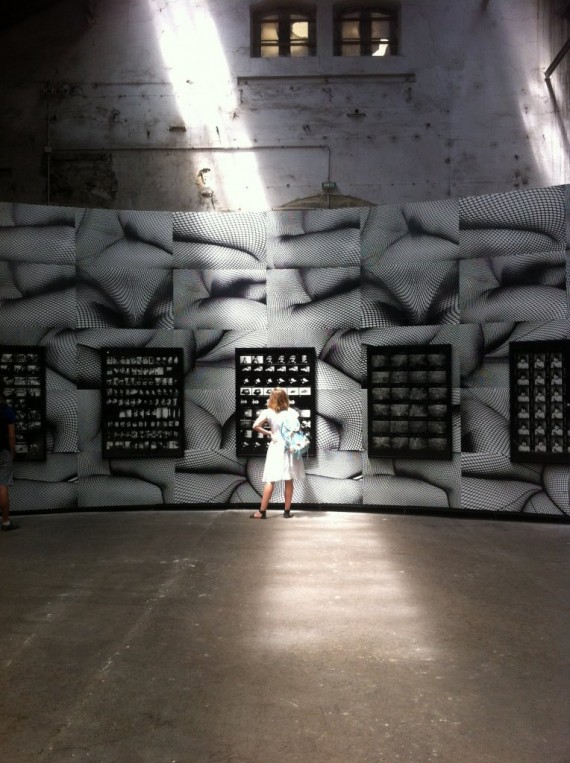 There’s something to be said for a photography festival that, in 2013, amidst the throes of change that have been brought on by digital technology, chooses to focus on black and white imagery as its unifying concept.

Is this a form of mourning? Does it represent an existential crisis in photographic culture, perceived or otherwise? Why this attempt to hark back to the glory days of black and white photography when colour clearly dominates nowadays and artists are taking the medium in all manner of directions? Where is the spirit of discovery that traditionally underpinned Arles? Why now?

Perhaps we are witnessing a confident, and well-measured move that attempts to look anew at this aesthetic? Either way, in his introduction, François Hebel, director of Les Rencontres d’Arles, wrestles with the very same question: ‘What place does black and white photography still hold today? Realism or fiction, poetry, abstraction or pure nostalgia?’ The answer, of course, is all of the above.

Marking something of a return to form in terms of the quality of the fifty or so exhibitions spread throughout the beautiful Roman town, this year’s Arles festival provides a large amount of great photography. But, as irony would have it, it is the Wolfgang Tillmans exhibition that received top billing above all the black and white offerings. Nestled in one of the giant, dusty train sheds, also known as the Ateliers, some 10 minutes walk outside of Arles, it is fair to say his show is museum standard.

Limits of the photographable

Every bit an artist using photography, Tillmans’ luridly coloured and oversized prints test the limits; not just the limits of the photographable or the clarity digital technology can afford but also of taste and what is permissible. Neue Welt, as the exhibition is titled, offers a very particular translation of the world into images. For Tillmans hones in on details such as close-ups of car headlights, human tonsils, flowers in blossom, fungi growing on trees, kiosks in airport lounges, Chinese construction workers, Moroccan car vendors, Dubai shopping malls, lobsters, toucans – they all run on parallel lines of interest and form some kind of pan-European-techno photography. He seemingly confers equal value on all objects or subjects as photo-worthy, charging the mundane with a form of eroticism that revels in excesses and hyper-consumption.

Given the digital high jinks and thinly-veiled commerciality, it’s easy to see why it appalled and amazed visitors in equal measure. But that would be to downplay the merits of his complex installation, his intricate network of images that flirt with different scales and sizes, and various modes of presentation, all the while eeking out possibilities and potential meanings between them.

Also crossing boundaries is Erik Kessels’ Album Beauty exhibition, held at the Palais de l’Archevêché, back in the centre of Arles. It presents unknown images from photo albums that Kessels has spent years amassing from flea markets and second-hand stores across the globe. The audience is meant to feel as if they are physically travelling through the lost world of a family album – all part of Kessels’ attempt to reconfigure viewer relations and installation methods.

In the adjacent space, the omnipresent Dutch collector and editor has presented his 24 Hours of Photos installation, the result of printing all the images uploaded to the internet in a twenty-four hour period. You can almost hear people ask themselves, “I wonder if my photos ended up on that heap?” as they stand next to you, their eyes surveying the veritable avalanche of photographs before them. As such, it provokes an interesting discussion on the ubiquity of imagery, the need for editorial control and the upshots, both negative and positive, of this truly democratic art form.

Across the other side of Place de la République, the Église Sainte-Anne plays host to the first major retrospective of the late Chilean photographer, Sergio Lerrain. Here, we’re stepping into the sanctimonious territory of black and white photojournalism. A classic example of the Magnum mode, depicting typically graceful and spontaneous images of street life and its various shades of society in Latin America and Europe. It’s a stable, if not stale, photographic reference. The real find is a short video positioned near the exit entitled Vagabond Children, comprising a 16mm movie from 1962 which depicts, amongst other things, homeless children wading through a river with their dogs hoisted in the air. It’s tender, eccentric, charming, and utterly melancholic – all at once.

Elsewhere, other highlights include Jacques Henri Lartigue’s immensely enjoyable exhibition at the Église des Trinitaires that records moments from the decadent Belle Époque. Lartigue and his wife Madeleine Messager (‘Bibi’) stroll chicly through avenues, race motorcars and enjoy luxurious skiing holidays in Chamonix, all absurdly set against the backdrop of World War I. Legendary Japanese photographer Hiroshi Sugimoto brought his transcendental seascapes to the party at Espace Van Gogh, and, in the other exhibition hall of the same venue, hitherto unseen black and white Polaroids from Guy Bourdin that date back to the fifties are on display in the exhibition Untouched. They demonstrate the French fashion photographer’s extraordinary capacity to create and focus desire, while simultaneously giving a whiff of his ground-breaking work for Vogue that would follow.

Viviane Sassen’s aesthetic majesty prevails in her exhibition In and Out of Fashion at Couvent Saint-Césaire, alluding to her ability to dodge and burn distinctions between fashion and art photography. She has developed an instantly recognisable visual language that is characterised by a surreal beauty and a shadowy persistence of her sitters, whose identity she often obscures to create a kind of anti-portraiture, adding another layer of questioning to the overall theme of the festival.

Yasmine Eid-Sabbagh and Rozenn Quéré also stood out in an otherwise fantastically uninspiring Discoveries Award section, and, indeed, were the rightful winners of the 25,000 euro prize for their mock-documentary project about four half-Palestinian/half-Lebanese sisters who ended up in exile in different parts of the world which ultimately serves to embody photography’s interchangeability between factual and fictional ends.

And then there’s the Alfredo Jaar exhibition, The Politics of Images, which is arguably the jewel in the crown of the festival. The highly-renowned Chilean artist specialises in a mode of interrogating the currency of images and the role photography plays in supposedly creating objective truths. Broaching topics ranging from the Chilean dictatorship (which drove him and his family out of his homeland and forced them to settled in New York), Western media representations of Africa, the Rwandan genocide, the hunt for Osama Bin Laden and human rights heroines, his work reveals an extraordinary attentiveness to the consequences of global and ideological conflict.

Entering the quiet, contemplative space of Église des Frères-Prêcheurs his population of installations, screening and documents seem to emerge from the darkness, and offer a refuge, a kind of cultural sanctuary that purges constructed narratives that are force fed to us through mainstream media.

One of his stand out pieces is The Silence of Nduwayezu, which displays a giant lightbox laden with 1 million slides (to correspond to the number killed in the Rwandan genocide by 1994) containing just the eyes of a five-year-old boy. Having survived a Hutu death squad massacre in which he witnessed his parents and many others slaughtered, the boy arrived at refugee camp mute from the trauma, and reportedly did not speak until one month later. The light emitted becomes a kind of horror, and Jaar’s illumination of atrocity points to photography’s fallibility to communicate with the public as our senses have been dulled by cliché-riden representations perpetuated by traditional forms of photojournalism. By denying us the documentary images and replacing them with the instrument of looking, ie the young boy’s eyes, Jaar not only reinforces the idea of blindness on the part of the world’s media but also maintains the dignity of its victims.

Jaar is a clever communicator. He unpacks complexity with a simplicity of means yet always manages to achieve his desired effect quickly but without shouting his message. It’s not an exaggeration to say his work invokes aura either. Though a great deal of the pieces have featured largely in many an institution previously, the fact remains that The Politics of Images is one of those shows where, upon leaving, you are not the same person as the one who entered.

Les Rencontres d’Arles may no longer be the place to seek out the latest talent, but for work that matters, work that stands the test of time, it always provides the nearest point on photography’s compass.