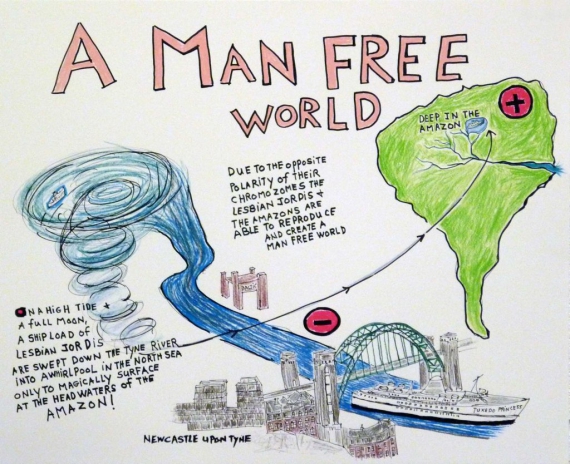 The Newcastle upon Tyne based commissioning agency Locus+ launches its first ever fund-raising Print Portfolio this week at the Venice Biennale. Locus+ has been working with artists to produce and present temporary public artworks in the North East of England and beyond for 20 years.

The print portfolio includes newly commissioned lithographs by Fiona Banner, Chris Burden, Mark Dion, Cornelia Hesse-Honegger and Richard Wright. The project, though, is as much about securing the organisation’s past as it is about looking to the future.

Locus+ Director Jon Bewley explains: “We are looking to raise funds to conserve, digitise and increase access to the Locus+ archive of temporary public artworks. The breadth and depth of artists who have visited the North East and worked with Locus+ over the years is very wide – so we were very rich in the choice of artists that we could approach for our first print portfolio. We’ve had such a good reception [from the artists] that there is now the possibility of a second portfolio that would contribute to programming and other affiliated activities.”

Since launching in 1993, Locus+ has facilitated over 170 projects, and that rich group of artists referred to by Bewley includes Anya Gallaccio, Cerith Wyn Evans, Cathy de Monchaux, Mark Wallinger, Richard Wilson and many more. But the archive actually dates back to the 1970s. Locus+ grew out of former incarnation Projects UK – ‘the first office-based visual arts organisation in the UK’ – which had itself developed out of the Basement Group – six Newcastle-based artists, including Bewley, who programmed and produced performance events between 1979 and 1983. Bewley often refers to both former incarnations when discussing the work of Locus+, identifying a continuum that goes back well over 30 years.

“If you look at our early history, we often sustained relationships with artists on projects that happened over a number of years – Stefan Gec being a very good example with his projects Buoy, Natural History and Trace Elements in the ’90s, as well as his more recent edition, Vengeance. In the current climate it can be harder to sustain long-term projects such as these, but similarly artists are not working in that way so much any more – the dynamic has shifted. So we have to be responsive to the methodologies that artists are adapting to.”

Running parrallel with the launch of the Print Portfolio, the Venice presentation will feature a series of portraits of artists that have worked with Locus+ (and its former guises), taken by photographer John Kippin.

“Many of the artists featured in those photographs were young students or recent graduates when they first came to work with us – there are several Turner Prize winners and nominees among them. There’s a photo of Mona Hatoum taken in 1986, but she first made a performance in the North East, with the Basement Group, in 1981 when she was a post graduate student. That gives you an idea of the length and depth and long term invested relationships we have with some of these artists.”

One of the more recent portraits is of Douglas Gordon. His Locus+ commissioned film work The End of Civilisation, that featured a grand piano burning to complete destruction in the Cumbrian countryside, premiered in Newcastle last summer before touring to New York and Tel Aviv. Locus+ in Venice will also see the launch of a new multiple by Gordon, I was born with…, commissioned by Locus+ and Little & Large Editions.

“Douglas was part of the committee of Transmission Gallery in Glasgow in the late ’80s. Its model was partly based on that of Projects UK – I was very closely involved with some of the founding members of Transmission and knew many of them as young artists when they were still post graduate students with David Harding on the Environmental Art course at Glasgow School of Art.”

For his new multiple, Gordon has produced a silver spoon in an edition of 13, in which the edge of the bowl has been sharpened to the equivalent tolerence of a surgeon’s blade. Six of the multiples will be available to buy in Venice. “The spoons are all different, they were all bought from a flea market in Berlin,” says Bewley. “The original functionality has been undermined by the fact that it’s been transformed into something quite dangerous.”

Despite obvious changes in the climate for commissioning over the past few years, Bewley is up beat about the future. “We are striving to protect our ability to enable projects that might not be facilitated by other commissioning agencies. We still feel we can provide artists from any circumstance the opportunity to really stretch themselves – if we can bring the right partners together and raise funds in the right way then we help artists to do things that they wouldn’t have the opportunity to do any more. We’re proud that we can facilitate that from the North East.”

Knowledge bank: Commissions – more on the environment and scope of public art commisisions in the UK and beyond.