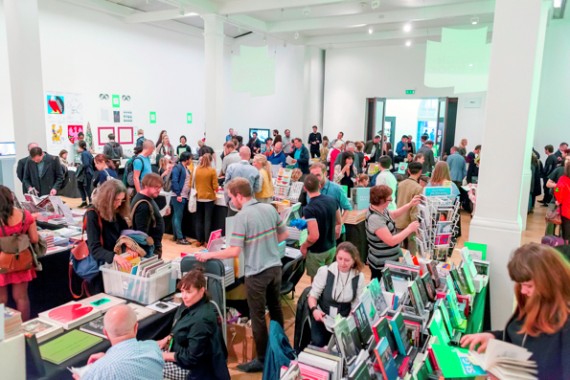 London Art Book Fair returns to the Whitechapel Gallery for its seventh consecutive year this week. Amid the hustle and bustle of stalls – featuring over 90 exhibitors ranging from major publishing houses to DIY collectives – for 2015 there is a strong Scandanavian theme.

After last year’s Canadian focus, the team at the Whitechapel have worked with three Nordic embassies to enable 12 independent publishers, artists and collectives from Norway, Sweden and Denmark to have a presence at the fair. As well as the stalls, there’s a curated exhibition featuring selected publications from each of the Nordic delegates and an associated talk on new Scandinavian photography.

“It’s a really fantastic opportunity for the public in London to see a whole publishing scene that they wouldn’t normally get to see,” says London Art Book Fair coordinator, Max Vickers. “Scandinavia has this incredible design and art heritage and we were incredibly pleased that it came off the way it did.”

Among the Scandinavian contingent is the fittingly named network of small presses, Publishing as (Part-time) Practice, founded in 2012 by publishers and designers from Sailor Press, Konst & Teknik and Andperseand in collaboration with Iaspis, the international programme of the Swedish Arts Grants Committee. The group are currently developing a shared online platform that will further support their aims for ‘shared marketing, distribution and knowledge sharing’.

Other Nordic exhibitors include Nilleditions, whose beautifully constructed publications explore the boundaries between mass publishing and limited edition, publishing each title on demand and adding small adaptations to each copy.

“We’re at a really exciting point; people are rediscovering old technologies at the same time as there’s this incredible digital revolution going on,” says Vickers. “There’s an interesting dialogue happening between some of the oldest ways of making books and the very newest ones.”

During the fair, returning stall holders Banner Repeater – an artist-led reading room and project space on Hackney Downs station – will be presenting a panel discussion to launch their new online, wiki-inspired archive.

“The fair will be really busy; we’ve got lots of signings as well,” says Vickers – no understatement given the packed three-day schedule of book signings by over 25 artists, authors and publishers including Anthony Isles, Fiona Banner and Michael Craig-Martin.

“Our audience is very knowledgeable about the books they’re buying and there’s a lot of respect, not just for the people who write them, but the people who publish them too. There’s a growing respect for the way that independent publishers operate now.”

Artists’ Books #1: ‘The Octopus Would Like To Put a Stop To Us’ by Otto – the first in a new monthly series from Sarah Bodman