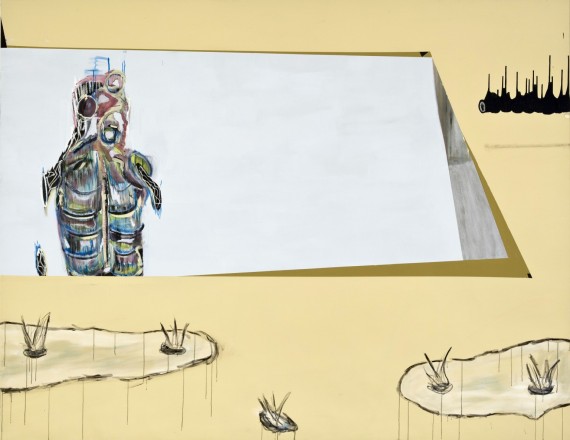 Manuel Mathieu has been announced as the winner of the fig-2 Student Open Call. Mathieu, who is in the second year of an MFA at Goldsmiths, will produce a new series of paintings for an exhibition at the ICA, London, opening on 7 December 2015.

His exhibition will be the penultimate show in the experimental fig-2 programme, which sees 50 exhibitions in 50 weeks at the ICA. A revival of 2000’s fig-1 project, the exhibitions are programmed independently in association with Outset Contemporary Art Fund and numerous partners and supporters.

The first artist to be selected from open call for fig-2, Mathieu was picked from 235 applications by a jury composed of fig-2 curator Fatos Üstek, fig-1 curator and founder Mark Francis, ICA head of programmes Katharine Stout, and artist Jeremy Deller, who also exhibited in fig-1.

“Whilst the range of submitted proposals was very strong and interesting, Manuel Mathieu’s work stood out as highly original,” said Stout. “I am delighted that he will be given an opportunity to share his distinct and meaningful paintings with a wider audience through his exhibition.”

Currently in the space (until 20 September) is a new sculptural video installation by Melanie Manchot that the artist has been developing over the last seven years. For 11/18 Manchot filmed an individual for one minute every month between the ages of 11 and 18.

Unlike many major institutional exhibitions, fig-2 is curated with flexibility and spontaneity. Artists’ projects are announced just five days prior to their exhibition opening.