Melanie Manchot: "We defined the aesthetic framework together but the content is theirs" - a-n The Artists Information Company 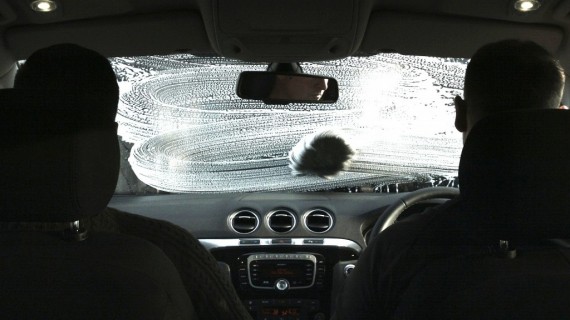 Looking out from the back seat of a car as it enters a carwash tunnel. The windscreen and rear-view mirror are concentric frames within frames in this dark, constricted space.

The sound, too, is oppressive: the pummel of water jets, the whir of the conveyor, the pulse of a man’s breathing. White soapsuds across the windscreen cut through the black, accentuating a partial reflection of the driver’s face in the mirror.

This is a scene from Melanie Manchot’s new multi-channel video installation, connecting remembered moments from the lives of 12 people in recent recovery from drug and alcohol misuse.

Twelve is the outcome of a two-year research project in which Manchot worked in dialogue with groups in rehabilitation communities in Liverpool, Oxford and London. Commissioned by the visual arts charity Portraits of Recovery and funded by the Wellcome Trust, it proposes a different way for audiences to engage with the subject of addiction recovery.

“We spent the first seven months meeting once a month but not making work,” Manchot recalls, “which is really unusual for me. It was research in a very honest sense – searching for what might happen, what might become, what might be.”

Manchot began by showing the groups how to use cameras and sound recording equipment, and leading acting and writing workshops. While these sessions often drew on participants’ difficult and traumatic early life experiences, it quickly became clear to Manchot that these narratives should not form the centre of the work.

“The moment you tell that story more than once it establishes a dividing line,” she says, “a sort of ‘us and them’ that is really problematic, reinforcing the separation, the vilification. And there’s already a lot of literature – and there are a lot of movies – that deal with that quite powerfully; the sort of violent background that leads to a life of addiction.”

Instead, by exploring a variety of working processes and alternative frameworks for storytelling, Manchot developed a methodology that would blur this line, offering participants control over their self-representation and situating the work, to powerful effect, somewhere between documentary and fiction.

Each part of Twelve‘s intricate montage is based on a scene from an existing feature film that deals with addiction and recovery or with obsessive, traumatic behaviour. (The carwash, for example, comes from Michael Haneke’s 1989 The Seventh Continent.)

Recurring motifs of water and glass, reflections and shadows are connecting threads between and through these vignettes; journeys, cyclical movements and repetitions are used as metaphors for the complex and non-linear nature of recovery. Subjects rarely address or face the camera and often scenes are recorded as point of view shots, constructing a filmic space that we, the audience, also inhabits.

The narrative, though, whether spoken or enacted, is directly informed by the participants’ lives and it is clear that it is their performances we are witnessing. Scenes are shot in single takes and left unedited; voiceovers retain the authenticity of hesitation, repetition, pause for thought.

“I’m quite careful about using terms like participation, collaboration, authorship,” Manchot says, “because I think they are vastly overused in contemporary practice. But I do think the work is co-authored in some way.

Manchot describes her film and photographic practice as an expanded form of portraiture, making work with people rather than about them, exploring the complex web of relations that is established in the process. She uses the camera very much as an agent within this, creating and activating a space for performance. “The moment there’s a camera, there’s performativity,” she says, “there’s a shift from just being.”

In this project, it seems its agency was particularly marked. Manchot describes how, although the participants were in treatment at the time and accustomed to sharing their life stories with others, the presence of a camera unlocked new ideas and enabled a different kind of disclosure. In one exceptional case a participant recalled a turning point moment that led to her addiction – a memory that she hadn’t previously accessed in therapy sessions.

Reviewing and talking through their footage together also seemed to have a therapeutic effect, as one of the participants, Stephen Giddings, explains: “You’re taking that step back and watching yourself from a distance. Even though when I was filming I felt pretty good, it was like the camera captured just how vulnerable I really still was at that time.”

For Giddings, the project has been particularly transformative, leading him to take up drama professionally and earn a place at the Manchester School of Acting. It is precisely this potential for art to become an integral part of the recovery journey, and to bring about different ways of knowing or understanding addiction, that Portraits of Recovery advocates.

“Artists expose the unseen or the unthought about through the creative strategies, solutions and approaches they bring to bear,” says the organisation’s founder Mark Prest. “They are able to reinterpret, reconfigure and transform the known narrative into new and different perspectives.”

In May, Manchot begins a UK gallery tour, presenting Twelve as a series of site-specific installations of up to 12 video channels that will respond to the different spaces at Peckham Platform, London; Castlefield Gallery, Manchester; Aspex Gallery, Portsmouth; and Towner, Eastbourne. Each installation will emulate the process of recovery in some way, with the work configured into discrete, sculptural elements.

“It’s important that the piece should have different shapes in terms of its narrative development and that audiences should have to displace themselves spatially and temporally in order to experience the work,” Manchot explains. “Addiction recovery moves forwards, backwards, you get side-tracked – it’s really not linear.”

In its first gallery presentation, as part of FACT Liverpool’s current exhibition, Group Therapy: Mental Distress in a Digital Age, the work is configured as a triptych of three video monitors arranged in a circle, with chairs in between them.

Visitors are invited into the circle to view the work, setting up an intimate, collective experience much like a group therapy session. The physical, almost corporeal presence of the monitors moves the work away from the cinematic towards a more embodied encounter, where you could be one of the storytellers.

“Melanie’s work reveals a space for reciprocal dialogue between subject and viewer,” says Prest. “The entry point to Twelve is broad and presents us with a wider set of questions around the human condition and the processes needed for resilience to empower recovery, reflection and transformation. The work reframes the addict as someone who is trying to get well.”

Indeed, while Twelve exposes the sad and often deeply traumatic narrative of addiction, it also succeeds in telling what Manchot describes as the “other, incredibly positive side” of the story. It’s the side that is perhaps harder to see, but that is about the survival instinct and the human spirit, and attests to the fact that people who have gone through so much have an incredible hunger for life.

The deep thrum of the dryers subsides as the car emerges from the tunnel and out into the day.

Twelve is currently showing as part of Group Therapy: Mental Distress in a Digital Age, FACT, Liverpool, until 17 May 2015. It then tours to London, Manchester, Portsmouth and Eastbourne. www.twelve.org.uk