MIF 2015: Neck of the Woods – too self-regarding to really engage - a-n The Artists Information Company 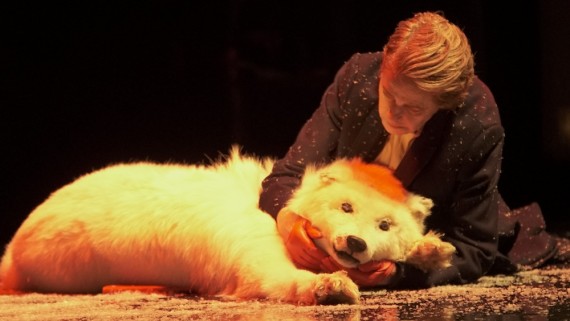 Violence, deception, an unsettling father-daughter relationship – directed by Turner Prize-winning artist Douglas Gordon and starring Charlotte Rampling, Neck of the Woods is the sort of bold, cross-artform collaboration that Manchester International Festival has become renowned for since its 2007 inception.

With music selected and played by international concert pianist Hélène Grimaud and a script from New York-based novelist and playwright Veronica Gonzalez Pena, it’s a coming together of talents that looks irresistible on paper – an arts super group, if you like.

Add its borrowing from the Brothers Grimm classic Little Red Riding Hood, and this journey into the dark woods of Gordon’s mind is brimming with theatrical potential. Sadly, it’s potential that for the moment remains unfulfilled.

It starts well enough. After a pre-performance warning that anyone averse to long periods of darkness might like to leave the theatre now, the house lights go off and the blackness is all-enveloping. 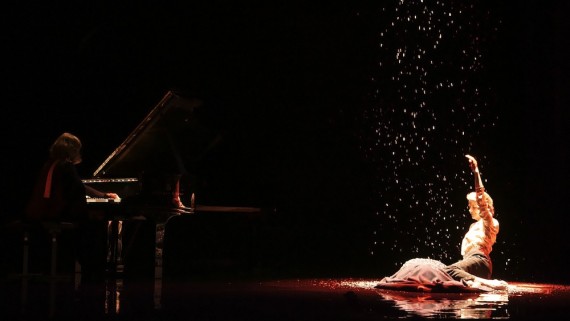 And then the chopping starts – loud, crunching, snapping, as an axe cuts into a tree. In between each rhythmic thud we hear the woodsman’s grunts of exertion, his exhalation of breath; we sense the physical and mental challenge. It’s primal, brutal, a little bit menacing – on its own in a black cube it would make a decent installation as part of a Douglas Gordon exhibition.

When the lights eventually come back on (like much of Neck of the Woods, it’s a bit overdone), the darkness continues: dimmed lighting, a shiny black floor; a copse of axes with a handle and head picked out in red; a grand piano; and Rampling, forlorn-looking and draped in a black cloak.

Apart from occasional off-stage interjections from Gordon, it’s Rampling who has to provide some kind of narrative drive to the production. It’s clearly a tough job. She seems ill at ease with her words, stilted in her performance – and is almost rooted to the spot throughout, a figure caught in the spotlight.

Dramatically static, this tale of scary wolves and an even scarier father is too self-regarding to really engage as theatre. Like an exhibition transposed to the stage, it simply doesn’t have enough drama to warrant its 90 minutes.