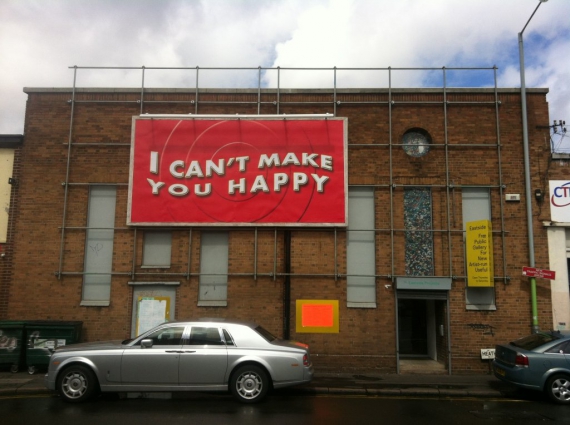 From 13-18 July, the festival’s mobile exhibition, The Polish Language Project, will be in the West Midlands, stopping off at The Public in West Bromwich, Eastside Projects in Birmingham and The New Art Gallery Walsall. It features work from the Polish artist duo behind Fundacja Rusz, Joanna Górska and Rafal Góralski, in collaboration with British artists Mark Titchner and Andrew D. Willet.

Billboards will be displayed on the side of a van and will travel through busy areas, all of which are home to a significant Polish population. The idea is to confront cultural stereotypes and myths surrounding the notion of Poles living in contemporary Britain, bringing the richness and complexity of Polish culture into the minds of the local public.

As Gavin Wade, Director of Eastside Projects, explains: “The idea of Polish artists bringing art to Digbeth or Birmingham is a good way to connect with a Polish community. It has more integrity, and is perhaps less patronising, than us trying to speak for them. We [Eastside Projects] are just the filter or another infrastructure to bounce off, if you like.””

Many of the works are emblazoned with witty one-liners: ‘Defend me from myself’, by Mark Titchner; ‘I can’t make you happy’, by Andrew D. Willett; ‘Let’s be the architects of our own misfortune’, by Joanna Górska; ‘Instead of digging our own grave let’s dig down to the source’, by Rafał Góralski. The intention is to transform the billboard into an object of aesthetic contemplation, reflection and insight.

Says Wade: “”Displaying art in this way, using the public language of the city, is an incredibly efficient and direct system of communicating that has real impact.”  ”

Art Moves is currently inviting submissions of work for inclusion in this year’s festival in Torun, Poland, September – October 2012. Artists are asked to respond to a festival theme inspired by the current financial crisis: ‘Where is the meaning? At the top or at the bottom?’

There is no entry fee, and the competition is open to any artist with an interest in billboard art. The deadline for applications is 20 July, 2012. Ten selected works will be displayed on billboards during the Art Moves Festival. The overall winner will receive the Main Award of 12.000 PLN (approximately £2,270).

For more information on Art Moves and the Polish Language Project, visit artmovesfestival.org