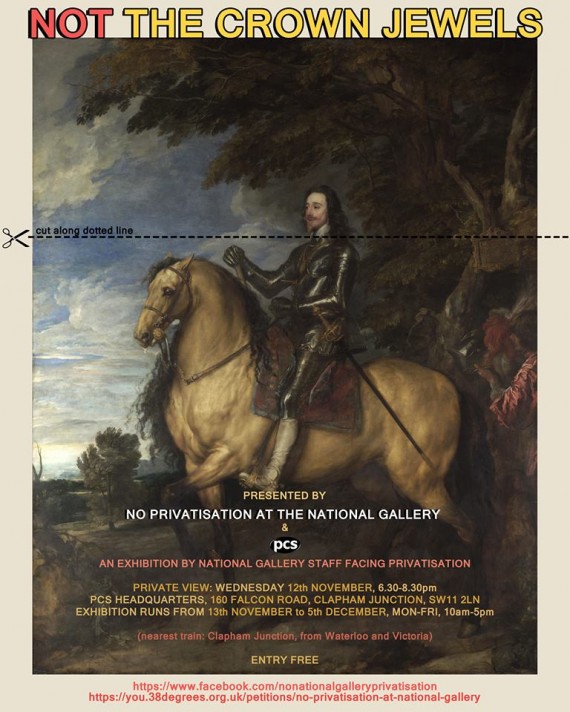 Staff working at the National Gallery have organised their own exhibition as part of ongoing protests against privatisation. In July, the gallery announced proposals to privatise the jobs of up to 400 of its 600 staff.

Taking the National Gallery collection as its starting point, 25 staff have curated a show of their own artwork which will run at the PCS Union HQ, London, from 13 November to 5 December.

The show’s title – Not The Crown Jewels – is a reference to comments by those in favour of privatisation who said that staff shouldn’t be concerned by the plans because the paintings in the gallery “are not the Crown Jewels”.

Although the privatisation proposals are currently on hold following protests and a petition which is on the verge of reaching 35,000 signatures, the gallery has hired a private security firm to staff the current blockbuster Rembrandt show. To coincide with the exhibition’s opening in October, there was a strike against privatisation by room wardens at the gallery, resulting in the closure of many of the rooms.

Writing on the Not The Crown Jewels’ event page on Facebook, the exhibition’s organisers say that they hope “to emphasise the knowledge of loyal gallery staff, their connection to the national collection, and to the gallery as an institution.”

They add: “The gallery’s employees are creative individuals with strong ideas, not just replaceable units to be sold off to the highest bidder.”