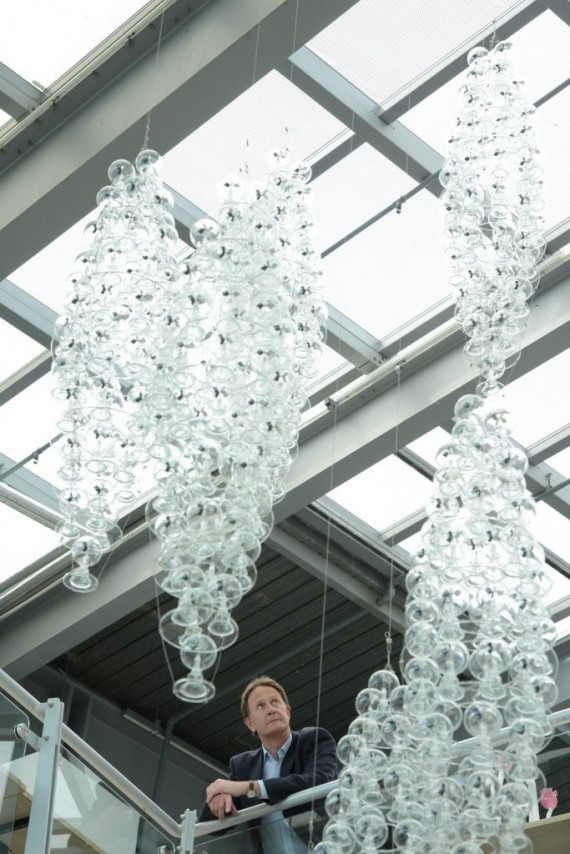 “The entire British glass community is descending on us this weekend,” says James Bustard, Director of Sunderland’s National Glass Centre, which reopens to the public on Saturday after a £2.25 million redevelopment. Made possible by grants from Arts Council England, the Heritage Lottery Fund, the Sir James Knott Trust and the Foyle Foundation, the centre’s parent institution, the University of Sunderland – who took over the running of the centre in 2010 – has also invested £975,000 in the project.

Getting the builders in has resulted in the centre doubling its exhibition and learning spaces. Bustard describes how capital investment has enabled an addition to the centre’s programme in the form of a semi-permanent heritage display. This will tell the story of glass in Sunderland, from the first introduction of stained glass to the region in the 7th century, through the post-war studio glass period to the current “high-performing and successful art school in the city.”

The Glass Centre, which originally opened in 1998, houses some 30 research students, several of which will be displaying their practice-based Phd research alongside the work of high profile artists. “We’re showing the work of about 40 glass artists and the cream of British studio glass art,” says Bustard.

Five dedicated exhibition spaces will display historical and contemporary innovations in the studio glass art form, a movement that transformed glass from something that was either utilitarian or decorative into a contemporary artistic medium. European studio glass art pioneer Erwin Eisch will have a dedicated exhibition, and 75 works loaned by National Museums Scotland from the bequeathed collection of British studio glass champions Dan Klein and Alan J Poole will be on display for a year.

A new permanent fixture, designed and commissioned for the launch, is Luke Jerram’s eight-metre high kinetic sculpture, which inverts the classic chandelier. Made up of 440 glass radiometers – usually used to measure electromagnetic fields – the vanes of each radiometer whirr, adjusting their speed according to the amount of heat from sunlight they receive into their partial vacuum. “I’d call it an anti-chandelier,” says Bustard. “It doesn’t emit light, it collects it.”

As part of its mission to push the boundaries of glass art, the centre also hosts a residency for artists whose practice does not normally involve glass. Bustard explains that the artists take on the role of designer while “we translate and facilitate their ideas.” Bruce McLean is one of four artists from this residency programme who will be showing new work in one of six display cases that have been embedded within the fat wall of the Long Gallery. He has been working with National Glass Centre teacher James Maskrey to create three glass heads.

“We spent some time developing work with Bruce using all sorts of free blowing and mould-blowing techniques,” says Maskrey. “He turned up at his last session with this great mould he’d made of an original stone carving he produced in 1959, age 15. So the glass ‘heads’ are manifestations of this original work. They are produced by blowing hot glass into a graphite-lined plaster mould.”

Alongside McLean’s work, three other artists who don’t work predominantly with glass will be displaying new pieces created during their residency at the centre. Ceramicist Richard Slee has been facilitated to translate his humorous signature style into glass objects, creating an épée fencing sword, a net for catching butterflies, and quirky old-fashioned torch lights. Katharine Dowson, meanwhile, has made glass casts of her own brain and a heart. Though not specifically a glass artist, the sculptor has a history of using glass within her work.

“There’s a timeless quality to glass,” she says. “From something as simple as sand, you can produce amazing colours and hues.” She uses glass to convey specific concepts that link art, science and spirituality. “It’s the membrane quality, the way it’s so hard and so fragile,” she explains.

Dowson has been travelling up and down from London to Sunderland over the last five weeks to intensively prepare her work. She has cast the heart and brain from an MRI scan. Since 2002, Dowson has been working to find ways to link up 3D printing software with this medical technology. She has worked with six programmers and scientists to develop a programme that will be readable for 3D printing and laser etching.

While 3D printing may seem a rigid and exact science, combining the process with glass allows for each work to be unique. “I love the happy accident you get with glass bleeding through the mould,” explains Dowson. “No two hearts are the same.”

Central to the National Glass Centre is the notion of ambition and exploring the boundaries and histories of glass – to the extent that feted Dutch designer Gijs Bakker’s work has been delayed in order to allow for its technical complexity to be fully mastered. A temporary replacement, however, was close to hand in the form of work by Maskrey. Proof, surely, that while glass production on an industrial scale no longer has a place in Sunderland’s economy, the National Glass Centre is playing a crucial role in keeping glass making a relevant and evolving skill for contemporary makers and artists.

The National Glass Centre, Sunderland, reopens to the public on Saturday 29 June. www.nationalglasscentre.com