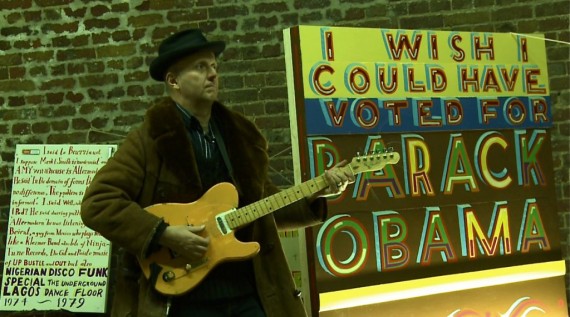 Make Your Own Damn Art, a new collaboration between filmmaker John Rogers and artist Bob and Roberta Smith (Patrick Brill), provides a unique insight into the working processes of one of the UK’s key contemporary artists.

Filmed predominantly in and around the artist’s studio in Leytonstone and premiered on Friday at the East End Film Festival, the film is an absorbing exploration of the concept of collaboration. The overriding message is that art belongs to everyone and still has an important role to play in society.

Rogers explains: “I loved Bob’s punk DIY ethos, his politics and use of humour. I’ve attempted to make the film in the same way.

“There is something that seems more liberated and enlightened in the way visual artists work as opposed to other art forms. That is possibly a romantic view, but other than novelists there aren’t many art forms where you can work alone in a room. I wanted to take a look inside that world.”

Brill and Rogers met three years ago in the unlikeliest of ways. Spotting a tube poster for the Leytonstone Centre for Contemporary Arts, a quick Google search led Rogers to a shed in the back garden of a house 30 seconds walk away from his own.

“I was beguiled by the idea that the space existed in a back garden,” says Rogers. “It was a statement that anybody could have a gallery if they want one. I literally just rang him up and we met for a drink in our local pub. He suggested there was something I could film the next day and before I knew it, I was making the film.”

Rogers’ documentary splendidly captures Brill’s humorous, polemical practice. Never one for reservation, this is an artist committed to art as part of the democratic process. Does Rogers worry about how the film will be received?

“With a documentary, there is always an element of doubt about whether or not you actually have a film due to the lack of control of events. Naturally I hope people engage with it and can take something away. I wanted to take a look inside the world of artists and visually I’m really pleased with what I achieved.”

While the film currently has no distribution deal, Rogers hopes to get it screened at galleries and museums. In the meantime, you can view a short preview clip here.