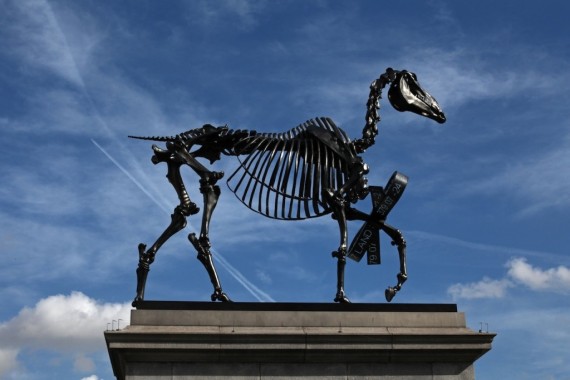 The latest commission for the Fourth Plinth in Trafalgar Square was unveiled by Mayor of London Boris Johnson this morning. Gift Horse by German artist Hans Haacke is the tenth sculpture to the sited on the plinth since the series began in 2005 with Mark Quinn’s Alison Lapper Pregnant sculpture.

Gift Horse depicts a skeleton of a riderless horse – a reference to the equestrian statue of William IV originally planned for the plinth – and is derived from an engraving in the The Anatomy of the Horse (1766) by George Stubbs. Haacke’s horse has an electronic ribbon tied to one of its front legs, displaying live updates from the London Stock Exchange.

Ekow Eshun, chair of the Fourth Plinth Commissioning Group, said: “Hans Haacke’s Gift Horse is an important, arresting sculpture. It asks questions about the role of money and power in modern London. And it marks the Fourth Plinth programme’s continued commitment to bring the work of leading British and international artists to the heart of the city and into dialogue with the public.”

Johnson described the sculpture as “a startlingly original comment on the relationship between art and commerce.” He added: “I hope it will stimulate as much debate as the other works that have appeared on the Fourth Plinth.”

On Saturday 7 March, the Institute of Contemporary Arts will host Looking Gift Horse in the Mouth: A Symposium on Hans Haacke. Co-organised by Jon Bird from the Middlesex University and Luke Skrebowski from the University of Cambridge, it will include a conversation with Hans Haacke and presentations by international speakers.