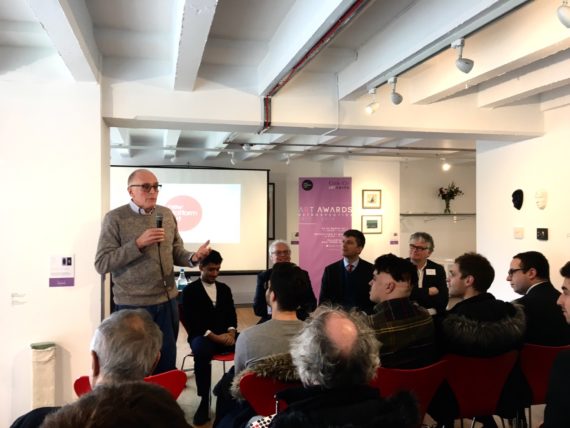 A new scheme has been launched that aims to help emerging artists by offering corporate support and expertise.

newplatform.art – which was launched last week at the Oxo Gallery, London, with speakers including the artist Richard Wentworth – expands on a model first used by the Clyde & Co Art Awards, facilitated by the international law firm Clyde & Co.

Over the last five years the group has supported over 200 emerging artists, and are now scaling up activities to a national and international level.

Companies that take part in newplatform.art will be offered support in selecting final-year graduating artists from one or more partner art school. Selected artists will then be invited to show work in their corporate offices for one year.

The artists will be paid to display their work and will be given the opportunity to sell their work at the end of the year. They will also be offered professional development workshops, creative entrepreneurship opportunities, and individual, tailored support.

Explaining how the model has already had an impact, newplatform.art trustee Paul Newick said: “Cash is important, and obviously that is why the artists are paid to exhibit. However, we wanted to offer something more. I was struck by how little support there is for artists when they leave art school, and that is where newplatform.art comes in.”

One artist who has already felt the impact is Bartholomew Beal, a graduate of Wimbledon College of Arts who featured in the Clyde & Co Art Awards 2011-2012. He was later awarded the Jonathan Vickers Fine Art Award (2012-13), a nine-month residency, and a solo show at the Derby Museum and Art Gallery in 2013.

However, it wasn’t all plain sailing, with Beal running into problems due to a contract he’d signed with a gallery after his degree show. He was introduced to Andrew Krausz, a senior associate at Clyde & Co, who offered pro bono legal advice as part of the award.

Beal explained: “I had signed an exploitative contract that I felt left me in a really difficult position. Thankfully, with Andrew’s help, the issue was resolved and I was free to get on with my career. Having access to that legal support was incredibly useful and it has allowed me to focus on the most important thing – my painting.”

Over the first five years of the Clyde & Co Art Awards, 75% of the work on show has been sold. Newick commented: “The biggest group of purchasers has been staff at the company. This has come from giving them the confidence in buying.

“For many it was their first encounter with original art, but it provoked a dialogue. Hopefully, as this model is more widely adopted through newplatform.art, more of the public will be encouraged to buy artwork.”

Although the focus has so far been on London art schools, there are plans to roll the model out nationwide. Fellow trustee Louise Zekaria said they are currently looking for companies and arts schools to partner with. However, key to this succeeding is shifting the perception of what corporates can offer the arts.

She said: “Historically, the arts have looked to businesses to provide financial support only, through sponsorship paid out through marketing budgets. Some businesses offer support by buying work, but ownership brings its own challenges. This model is different.”

Newdick added that there has been some difficulty convincing people to adopt the model. “We have experienced some resistance from members of the art world who saw us simply as fat cat lawyers. Our attitude is we can offer so much more. For me, ‘corporate art’ has been a wasted opportunity, but with newplatform.art we can push the boundaries and challenge people.”

Image:
Richard Wentworth at the launch of newplatform.art at the Oxo Gallery, London. Photo: Jack Hutchinson