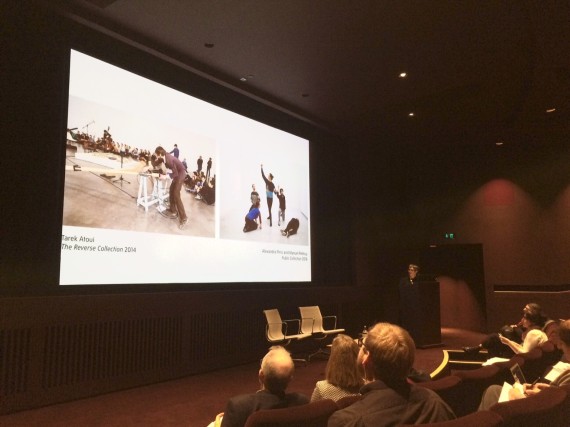 Speaking at a launch event in the Bankside Power Station that has housed Tate Modern since 2000, she said the new displays will make the gallery more diverse and engaging, with a strong international focus.

Morris said: “The headlines are more international, more new media and importantly more women. It is a complete re-hang across the whole site and we’re having enormous fun behind the scenes unpacking boxes and putting it together. There will be lots of surprises when the galleries open in June.”

With work by 300 artists from 57 countries, the new displays reflect the diversity of the collection Tate Modern has built up over the last 15 years – 75% of the work to be displayed has been acquired since 2000. This includes new acquisitions from Latin America, Africa, Asia, the Middle East and Eastern Europe.

Central to this is a strong focus on showing work by female artists. Morris said: “It isn’t a case of showing women for six months and then letting the chaps back in. It is about showing the real history of art.”

In addition, a whole floor of the the new building will be dedicated to Tate Exchange. Billed as an ‘open experiment’, 50 organisations including charities, community radio stations, universities and healthcare trusts will be invited to run events and projects on site.

Through this, Morris hopes to increase Tate’s engagement with emerging artists. “We have a vision but not yet a plan for younger artists. I’d love to think within the next few years we can re-engage with emerging artists. This may not necessarily involve physical spaces, but will be something more dynamic through Tate Exchange.”

Tate plan to mark the opening of the new galleries with three weeks of performances and events throughout June and July 2016. The programme will include live art from the Tate’s collection, staged intermittently throughout the Boiler House and Switch House galleries.

This includes work by Tino Sehgal, Amalia Pica and Tania Bruguera, plus a host of new performance commissions running every day in The Tanks – Tate’s dedicated live art space.

Nicholas Serota, director of Tate, also revealed they had still not yet raised the full £260 million needed to complete the construction work.

“We are still £30 million short,” he said. “Prior to the recession we anticipated finishing in 2012. However, due to inflation the figure raised.”

Serota first revealed the £30 million funding gap back in September 2015, when the opening date for the extension was announced. Nevertheless, he is confident the remaining funds will be found and it will not have an impact on the planned June opening.

“I’m not going to make an announcement every week saying how much has been raised. But I will say we will be opening all the doors – not just some of them – on 17 June.”

Art is… at Tate Modern: stimulating, provocative and often moving