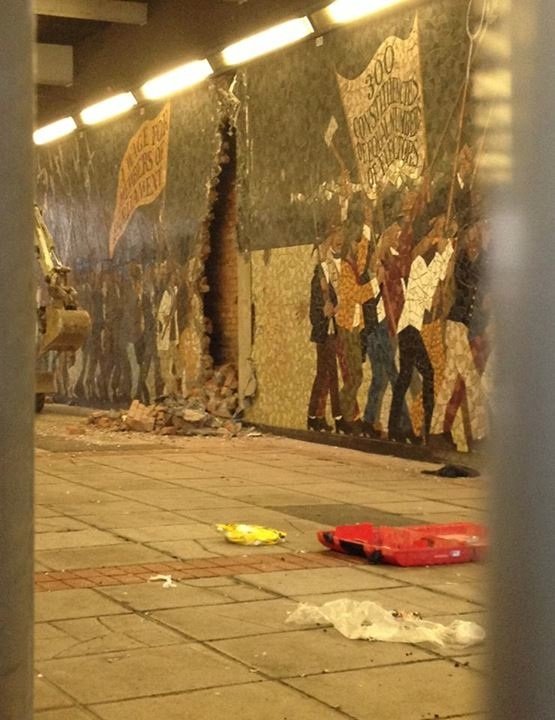 Yesterday, the Arts Council of Wales held their annual conference, Creative Futures. John Griffiths, Newport East Assembly Member and Welsh Culture Minister, gave a keynote speech saying how essential the arts were to raising people’s aspirations and how he would work very closely with local authorities to deliver the important message of what the arts offer.

A few hours later, workmen in Newport demolished the city’s historic Chartist Mural; made from 200,000 pieces of glass and tiles and 35 metres, it look less than six hours for three men and a small digger to knock it down.

With Cadw, the Welsh government’s environment service, refusing to list the mural, which had been in place for 36 years, and Griffiths taking the view that “the Chartist mural in Newport is basically a matter for the local authority”, there was no reason for Newport Council to preserve it. Nothing must stand in the way of a £100m city centre shopping development – the Council ignored the petition signed by more than 4,000 people.

Designed by Kenneth Budd and depicting the 1839 Newport Rising, the mural was held in great affection by people in Newport and surrounding areas. It was used as an educational tool by parents, and has been the inspiration for many people becoming interested in art, history and politics.

The demolition came as a shock to people in Newport (as a mass demonstration was planned two days later). It appeared that the Labour-run Newport City Council had purposefully chosen to demolish it just before the demonstration took place. They chose a day of torrential rain, knowing John Frost Square would be deserted. They hadn’t made the announcement public.

When campaigners found out at 1pm, they gathered at the fenced off area and shouted “vandals” and “despicable” from behind the barriers. As the mural was being demolished, policemen brought out fragments to give to the protesters and onlookers.

Peter Rawcliffe of the Save the Chartist Mural campaign held aloft a piece of the mural and said how Newport Council had lied about how difficult it was to remove it, saying that the Chartist Mural could have been removed easily. He called into question Newport Council’s £600,000 cost to take it down. Photographic evidence showed it was not attached to the car park, as the Council claimed.

Jonny Sherwood, a Newport artist, said: “They are destroying it because it’s a symbol of working-class history. The mural reminds us that working-class people once had a voice. It’s an embarrassment to the Council.”

Tracy Roberts, one of the campaigners, explained that her grandfather Albert Shakesheff helped build the Chartist Mural and other mosaics in the town. She said she was disgusted: “It’s part of our heritage. It’s a part of all of us and it’s our history that’s being destroyed.”

These words were echoed by others, who said it felt like part of their childhood was being thrown away and the heart was being ripped out of the city. This anger was repeated on social media, with people outraged at the disrespect shown to Newport’s radical past and contempt for their opinions.

What kind of creative future is there in Newport? Newport Council refused to comment.

A peaceful protest, with speeches and music and artists destroying their artwork, takes place on Saturday 5 October 5 at 12pm in John Frost Square, Newport.