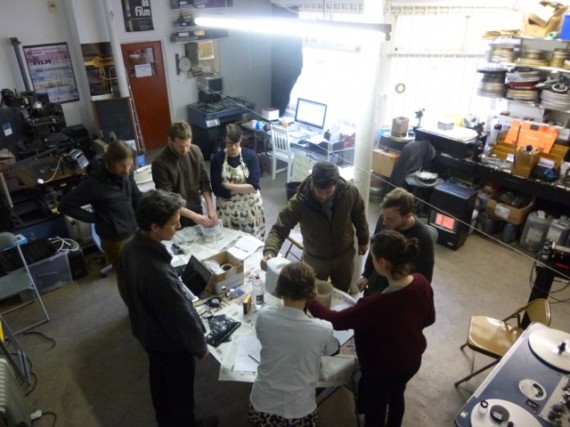 No.w.here, the experimental film hub and community space based on East London’s Bethnal Green Road, is at risk of losing its home.

Founded in 2004 by artists Karen Mirza and Brad Butler and co-run with film maker James Holcombe, No.w.here is a space for discussion, exhibiting, making and learning. Its production lab, gradually built up over the years, includes bespoke equipment that is unavailable anywhere else in the UK.

The current space, which No.w.here has been in for nine years, was recently awarded the legal status of Asset of Community Value (ACV) by Tower Hamlets council.

A petition on Change.org has been set up to request the landlord, who is currently seeking to overturn No.w.here’s ACV status, to reconsider and recognise the community value of the artist-run space, which is an Arts Council England National Portfolio Organisation.

Having been on good terms with their landlord during the period of the first nine-year lease, discussions and preparations to renew for another nine years were cut short soon after May’s general election when developers enquired about the building during a burst in property speculation.

No.w.here hope to renew the relationship and tenancy as part of a wider campaign by Stop the Blocks to preserve the character and communities of the area from gentrification.

Says Mirza: “The history of the area has strong radical roots, migrant culture and working class labour histories that are an important part of the inspiration to the community at No.w.here. Tower Hamlets’ local history archive and Bishopsgate Library have played significant roles in our projects.

“The local neighbourhood, its people and our project are intertwined in a strong community that means we all know each other, and are in each others lives. We are part of that history too now, having contributed and worked locally for 10 years.”

Mirza is urging artists and supporters to get involved by signing the petition, attending campaign meetings or using the No.w.here space as an associate member. She adds: “If we are forced to move, it most probably will be out of the city as there are just so few industrial spaces left for artists to set up community spaces.”

No.w.here are due to hear from Tower Hamlets council regarding the ruling on their Asset of Community Value status in early December. Sign the petition to stay up to date with campaign activities or contact No.w.here directly

Boris tells developers to speak to artists about city plans

Brutalist truth: Robin Hood Gardens and the politics of regeneration