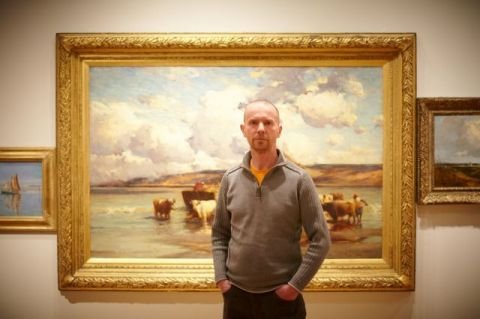 Nominated by Kate Farrell, (Curator – Special Exhibitions at The Lowry ), Fitzmaurice makes work which is ‘characterised by a desire to reorganise the everyday and familiar’. In choosing Fitzmaurice as the winner, the judges commented that: “Leo’s work in particular is ambitious, risky and compelling. Drawing upon historical resources and current mobile phone technology, he provides a fresh perspective on the traditional subject of landscape whilst at the same time pushing boundaries of his own practice”. Speaking to a-n, Pippa Hale, Director of the Northern Art Prize commented that Leo was a ‘deserving winner’ who has “been integral to building an infrastructure for artists in Liverpool”.

Fitzmaurice’s winning exhibition consisted of a selection of 19th and early 20th century landscape paintings from the Leeds Gallery collection to create Horizon, by positioning the paintings so that the horizon line ran through one frame to the next; and The Way Things Appear, an informal slide show of images collected via the artist’s mobile phone. In an interview with a-n, he said he intended to spend the £16,500 prize money on “time”, allowing himself to make new works.

The other artists shortlisted for the prize, each receiving £1,500, were Liadin Cook, James Hugonin and Richard Rigg who won the online People’s Choice poll. The exhibition continues to 19 February.