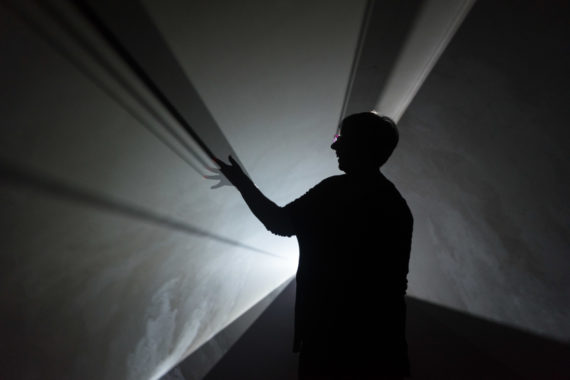 Anthony McCall, The Hepworth Wakefield
This large survey of work by New York-based artist Anthony McCall features a number of his signature ‘solid-light’ installations. He has described his work as existing in the “space where cinema, sculpture and drawing overlap,” with the resulting environment encouraging visitor engagement. Presented here for the first time are three new installations, with the exhibition also highlighting the importance of drawing and the in-depth planning that goes into McCall’s work.
Until 3 June 2018. www.hepworthwakefield.org 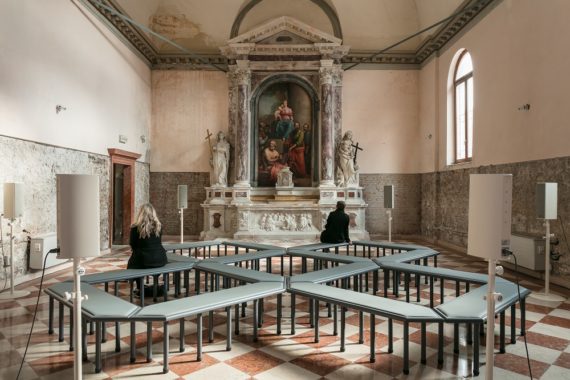 James Richards, Chapter, Cardiff
Welsh artist James Richards’ latest exhibition features sound, video and installation, including work that was originally commissioned for the Welsh pavilion at the 2017 Venice Biennale. Highlights include Migratory Motor Complex (showing until 10 March only), a six-channel electro-acoustic installation that features re-occurring vocal and musical motifs that have been developed in collaboration with students from the Royal Welsh College of Music and Drama. Also on show is What weakens the flesh is the flesh itself, a video made with Richards’ collaborator Steve Reinke. The basis of the work is images found in the private archive of Albrecht Becker, a production designer, photographer and actor who was imprisoned by the Nazis for being homosexual.
Until 26 May 2018. www.chapter.org 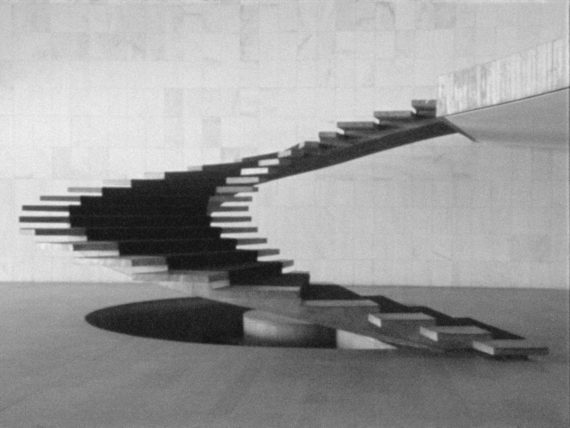 Tamar Guimarães and Kasper Akhøj, De La Warr Pavilion, Bexhill-on-Sea
The first public gallery show by Tamar Guimarães and collaborator Kasper Akhøj includes moving image and photographic works created over the last ten years. The exhibition brings together the disparate histories of Brazil and Bexhill-on-Sea, with works such as Studies for a Minor History of Trembling Matter emerging from research undertaken in the small Brazilian town of Palmelo, many of whose inhabitants are Spiritist mediums. Other works include Captain Gervásio’s Family which explores the lengths that one of Palmelo’s mediums underwent to draw a map charting 20 astral cities hovering above Brazil.
Until 3 June 2018. www.dlwp.com

Elizabeth Magill, Matt’s Gallery, London
The first of a series of quick turnaround 10-day shows at Matt’s Gallery’s new space at Ron Henocq Fine Art in Bermondsey, this show by Elizabeth Magill responds to the restrictions of the small gallery space  – 3m x 3m x 3m – with a pared-down show of just three works, including two small paintings and one large hybrid work mounted on aluminium. The latter, entitled Still (dark), is indicative of the artist’s wider practice, featuring images from personal archives, art history and vintage photography which were screenprinted before being worked over repeatedly and in different ways.
Until 4 March 2018. www.mattsgallery.org

Margaret Salmon, Tramway, Glasgow
Working mainly on 16mm and 35mm film, American-born, Glasgow-based artist Margaret Salmon creates films that capture the everyday connections between people. This show acts as something of an overview of the last 20 years of her practice, although this exhibition – which forms part of Glasgow Film Festival – is not a standard retrospective. Repurposing existing work in different ways, highlights include a new six-channel sound piece, This world is not conclusion. The work brings together recordings accumulated over the years that never found a place within another singular work. Also on show is the video installation Company, which mixes four earlier works into a new piece playing across nine screens.
Until 18 March 2018. www.tramway.org