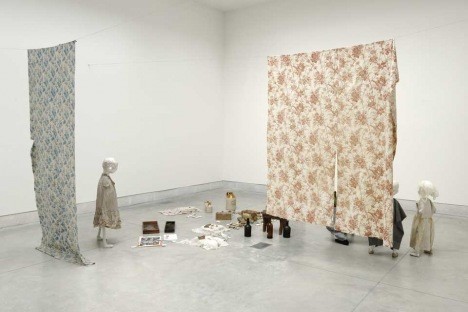 Cathy Wilkes, Tate, Liverpool
This exhibition of Turner Prize nominated (2008) artist Cathy Wilkes’ work features several of her large-scale sculptural installations alongside paintings, works on paper and archive materials. Bringing together more than a decade of the Glasgow-based artist’s acclaimed work, this jam packed show is her largest and most comprehensive to date and runs alongside an exhibition of paintings by Leonora Carrington (1917-2011).
Until 31 May 2015, www.tate.org.uk

What Will They See Of Me?, Jerwood Space, London
Featuring new films from Lucy Clout and Marianna Simnett, winners of the Jerwood/FVU Awards 2015, the works have been developed following £20,000 commissions supported by Jerwood Visual Arts and Film and Video Umbrella. Both projects explore the uncertainties and ambiguities of identity in response to the curatorial brief, ‘What Will They See of Me?’. The exhibition will also tour to CCA, Glasgow (30 May–12 July 2015).
Until 26 April 2015, jerwoodvisualarts.org

Zhang Enli, Hauser & Wirth Somerset, Bruton
For this exhibition at Hauser & Wirth Somerset, entitled Four Seasons, the Shanghai-based Chinese artist Zhang Enli presents a new series of his slight, delicate oil paintings. The works are all connected to the natural environment – including enlarged views of water, leaves and trees – and Enli has also created a ‘space painting’, applied directly onto the walls, ceilings and floor of the space.
Until 21 June 2015, hauserwirth.com

Pre-Pop to Post-Human: Collage in the Digital Age, Grundy Art Gallery, Blackpool
This Hayward Gallery Touring exhibition features 37 newly commissioned prints by 15 young artists, shown alongside a selection of 16 lithographs and screenprints from 1972 by Eduardo Paolozzi (1924-2005). The artists use digital manipulation as today’s equivalent of collage, with the results being otherworldly landscapes, strange textures and surreal forms.
Until 11 April 2015, www.grundyartgallery.com