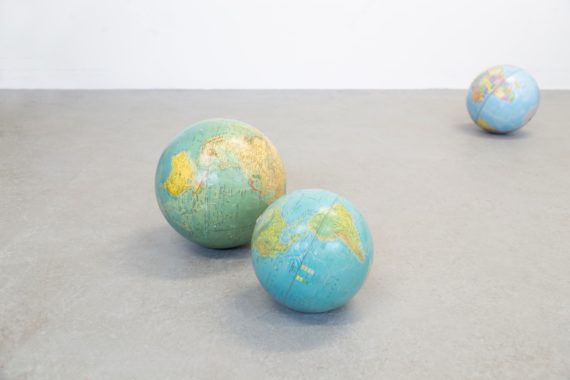 Glasgow-based artists and a-n members Zoe Walker and Neil Bromwich present a new installation that invites audiences to think about the ways in which capitalism shapes our society and what the alternatives might be.

A large-scale inflatable serpent sculpture is accompanied by a series of drawings and photographs that imagine shifting worlds. The works reference the ancient symbol of the serpent, found in creation stories and myths across cultures, and often appearing as a symbol of destructive creation and regeneration, through which the world is reborn.

This major exhibition by influential artist collective The Otolith Group, founded by a-n Board member Anjalika Sagar and Kodwo Eshun, features key works produced between 2011 and 2018.

Working across post-cinematic essayist films, videos and multi-screen installations, Xenogenesis reflects the artists’ ongoing commitment to creating ‘a science fiction of the present’, through an expansive practice that addresses ‘contemporary social and planetary issues, the disruptions of neo/colonialism, and the influence of new technology on consciousness.’

Xenogenesis is accompanied by a publication of the same name, which features material and graphics from the group’s broader practice such as performance, lectures and research. Writings by the artists are accompanied by contributions from thinkers, scholars and art historians from disparate fields, including Shanay Jhaveri, Fred Moten and the late Mark Fisher.

Chowdhary, whose works sits between art, design, craft and architecture, combines hand-making techniques, such as clay modelling and glazing, with the latest industrial technologies including CNC cutting. Born in Tanzania and brought up in Rochdale, Chowdhary’s work reflects a range of cultural and artistic references, from geometric minimalism to Islamic ornamentation.

The exhibition title, Erratics, refers to large rocks or boulders that have been transported by glacial flows, then settled in a new location when the ice melts. Displaced from their original geological context, they can stand out for their uncommon shape, size or rock type within a new, alien landscape.

In constant motion is the sculptural work Flotsam, a collection of world map globes from different places and eras, that automatically roll across the gallery floor, colliding with each other and ricocheting in new directions. Meanwhile Empire consists of an original 1895 map of the British territory that the artist has carefully erased ‘so that the land masses and trade routes become faint memories between the remaining oceans that connect them’.

A series of watercolours titled Channels also addresses themes of migration and movement of goods. Made with water from the narrowest point in the Channel, these paintings depict the sea at the place where the samples were collected and are overlaid with text taken from UK newspaper headlines during the height of Brexit negotiations.

For the past 20 years a-n member Hew Locke has explored the role of historic monuments through sculpture, installation, drawing and collage. His interest in the power of statues originates from his childhood in Guyana where he passed a sculpture of Queen Victoria every day on his way to school. Foreign Exchange, which reimagines Birmingham’s city-centre bronze of Queen Victoria, is Locke’s first temporary public sculpture and “the realisation of a long-held dream” he says.

The artwork, which is based on sketches the artist made for his 2019 solo exhibition at Ikon Gallery, surrounds Birmingham’s existing statue of Queen Victoria, who is joined by five smaller replicas of herself standing within a boat. Each figure wears a gold Britannia-style helmet and a medal that represents a significant battle in the history of the British Empire.

Foreign Exchange has been commissioned for Birmingham 2022 Festival, to coincide with the Commonwealth Games. Locke aimed for all visitors and participants in the Games to be able to engage with his artwork, commenting: “The culture in the UK today is a result of centuries of foreign exchanges, including across the former Empire… Representations of Victoria are scattered across the UK, and also existed in every country represented by athletes at the Commonwealth Games.”

Several a-n members are among the 26 artists taking part in this exhibition of sculpture and installation in Chichester Cathedral and its grounds. The participating artists, who are based in south-west England and are all members of the Royal Society of Sculptors, initially came together online during the pandemic as a mutually supportive group.

Bath-based Kate McDonnell’s piece Twisted consists of a mass of twisted black paper, resembling a dark cloud and dramatically installed above the cathedral’s font. McDonnell describes the work as “reflecting the anxiety caused by Covid. It manifests the experience of unease as a physical act”.

Another a-n member, Tabatha Andrews, who lives and works in Yelverton, Devon, presents a new work in wool, felt and charcoal, while Somerset-based a-n member Fiona Campbell shows Martyrdom of the Ten Thousand. Made from recycled textiles and objects such as beads, shells, wood and paper, the sculpture references the trafficking and slaughter of pangolins – scale-covered mammals that are critically endangered.

16 a-n members from across the UK take part in this group exhibition that includes late lithographs by Henri Matisse (1869-1954) alongside works by 42 paper artists working in the UK today.

Among the 200 contemporary works, which include animation, origami, fashion, collage, sculpture and paper cuts, are pieces by long-standing a-n members Susan Stockwell and Jessica Parker. London-based Stockwell’s previous works include meticulously crafted paper dresses made from the pages of atlases.

Bath-based Parker’s practice focuses on the possibilities of paper as a medium to capture movement, shape and space, with conservation and nature dominant themes in her work. Also inspired by natural patterns and colours is Rugby-based a-n member Clare Pentlow who presents intricate hand-cut textured paper works.