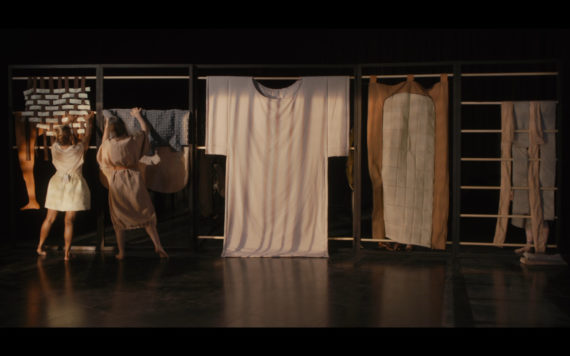 a-n member Emily Speed, whose practice examines relationships between people and architecture, presents a newly commissioned film installation at Tate Liverpool. ‘Flatland’ is inspired by Edwin Abbott’s 1884 novella of the same name, a satire of women’s roles within Victorian society, where all existence is limited to two dimensions and women are restricted to thin, straight lines. Speed’s new work, made collaboratively with a director of photography, performers and garment makers, incorporates set design, choreography and costume. The film’s centrepiece is a portable stage set inspired by manually operated Japanese kabuki theatre sets, that folds and unfolds in different directions, variously evoking flattened hierarchies and close-knit community structures.

This solo exhibition of staged documentary style photographs by Sunil Gupta presents a series of 10 works commissioned in 1986 for the pivotal exhibition ‘Reflections of the Black Experience’ at Brixton Art Gallery. For the first time since then, ‘Black Experience’ is exhibited in its entirety and in a larger print format.

Taken in the context of 1980s post-colonial and post-modern Britain — a time when the term Black could describe any person of colour and referred to shared experiences of disenfranchisement as much as to skin colour — the photographs reflect Gupta’s political activism during that time. Each photograph of members of the South Asian community is titled with one word, such as ‘Elderly’ or ‘Migrant’, with the stereotypical occupation of ‘Shopkeepers’ or with generic occupations not previously associated with South Asians: ‘Artist,’ ‘Writer’ and ‘Educator.’ These photographs visually represent Gupta’s distinct experiences, quite literally in the case of the work ‘Gay’ (above), which includes Gupta himself and his partner at the time, as he could not find any queer South Asian people willing to be photographed.

Taking place in venues across East Lancashire this biennial throws a spotlight on contemporary textiles. Set against the historic backdrop of cotton mills and industrial architecture along the Leeds & Liverpool Canal, the festival focuses on the global nature of textiles and the relationships they create. Highlights include a major new commission by Lubaina Himid titled Lost Threads, which explores the histories of industrialisation, female labour, migration and globalisation.

Three a-n members show new work. Brigid McCleer presents Collateral, a memorial to workers who die in factories and sweatshops that supply the global garment industry, and made in collaboration with local embroiderers. Jamie Holman and Jasleen Kaur are included in ‘The British Invasion’ exhibition in the grand setting of Blackburn Cotton Exchange. Alongside Zimbabwean-born artist Masimba Hwati, their biennial works reflect on cultural identity through their family histories, lived experiences across three continents and the consequences of colonisation.

Leeds-based a-n member James Thompson makes work that explores experiences of architecture and physical space, often creating site-specific installations in response to civic buildings to reveal and reimagine their histories. In 2017 when Leeds Art Gallery closed for renovation, Thompson carried out ‘research performances’ to document parts of the Victorian building, as well as recording its architecture through aluminium impression moulds, audio recordings and digital scans. The resulting work presented in ‘Spatial Drifts’ includes large sculptures alongside fragile objects, representing collapsed versions of the space and suggest the hidden lives of the building through time. Meanwhile a film exploring the history of Leeds Art Gallery and of former art spaces in the city speculates on potential futures.

Scottish artist Ruth Ewan, an a-n member, is known for her research-led work that engages with the circulation of radical ideas and social movements. This solo exhibition is part of the project ‘The Ignorant Art School: Five Sit-ins towards Creative Emancipation’, which brings together artists, designers, educators, activists, cultural workers, students and the public to ask what art education is and who it serves. Ewan presents new work including a decimal clock installed on the front façade of Cooper Gallery, which features 10 hours rather than 12, in reference to the abolition of the 24 hour day during the 1789 French Revolution. Also exhibited is an ambitious installation titled How Many Flowers Will Make the Spring? (above) which presents audio of oral histories and the personal recollections of activists involved in public moments of dissent, within an indoor meadow-like landscape made of dried grasses, plants and flowers.

Until 23 October, Cooper Gallery, Duncan of Jordanstone College of Art and Design www.dundee.ac.uk/cooper-gallery

My Kid Could’ve Done That!

Several a-n members and their children are included in this group show curated by Will Cooper (and his five year old daughter, Astrid), who came up with the idea of a collaborative parent-child exhibition after working from home during the pandemic. Many of the specially made artworks are unsurprisingly playful, while others reflect on the labours of juggling childcare and creativity.

A-n Artist Council member Jasleen Kaur and her son Rai’s contribution includes samosa sculptures; France-Lise McGurn and Rita have created large collaborative paintings; Sean Edwards and his children Albert and Gwen have gathered a table full of objects made over the past decade; Lilah Fowler & Reia have made an installation titled A flying balloon machine I can sit on (above); while Kate Owens and her daughter Trudy have merged Kate’s printmaking practice with Trudy’s love of mazes.

Another a-n member Natasha MacVoy presents a two-screen film made with her 10 year old twins, which reflects on the blurred boundaries between home and workplace. Meanwhile Harriet Bowman has covered one wall of the gallery with a text-based wallpaper which lists the challenges of occupying and caring for her son Len in her studio, and the associated guilt, shame and support she has experienced.

This exhibition by Leeds-based artists and a-n members Julia Crabtree and William Evans includes new and recent sculptural work. The duo, who have worked together for over a decade, use a wide range of traditional and digital materials and processes, including textiles, blown glass, ceramics, casting and video. Spanning the main galleries of the Henry Moore Institute, ‘Slip’ features installations that explore the possibilities of sculpture, the points where craft and technology meet, and the relationship between ecologies and the body.

Artist, curator and gal-dem founding member Leyla Reynolds has selected 24 artists for Bow Arts’ annual Bow Open Show. Responding to the title ‘Aboutface: regroup, reorganise, reimagine’, the exhibition includes works ranging from a-n member Marcus Orlandi’s politically charged banners (above), to a delicate spine of ceramic COVID-19 masks and jewellery inspired by the Hindu Goddess Kali Ma, who was a beacon of hope and resistance to anti-colonial movements during the Bengal revolution.

Several a-n members also show work, including Tara Versey, painters Nitin Amin and Nell Brookfield, and sculptor Victoria Burgher. The exhibition is accompanied by a series of talks and participatory workshops for all ages, including banner making with Orlandi and a curator’s talk with Reynolds. On making the selection, Reynolds comments: “This exhibition is a testament to the humour, craftsmanship, and tenacity of its makers, as well as their ability to capture an overwhelmingly determined spirit of collective joy and resilience.”