Oil, image and sponsorship of the arts - a-n The Artists Information Company 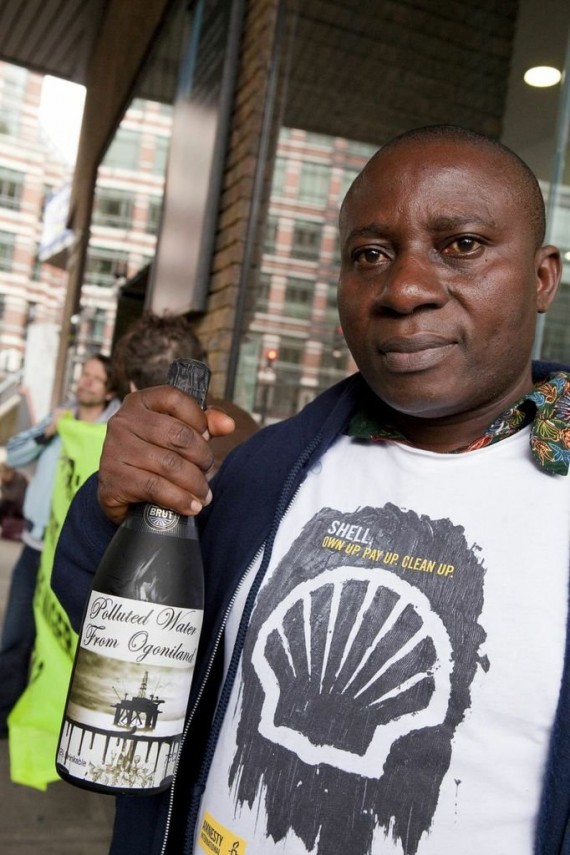 Platform, the organisation that combines art and activism, has attempted to present a Champagne bottle full of polluted water from the Niger Delta to the CEO of Shell.

On Thursday morning (May 23) in London, Celestine AkpoBari Nkabari, an environmental activist and human rights defender from Ogoniland in the Niger Delta, staged the protest at the Shell shareholder presentation. The intention was to hand the bottle to Peter Voser, the soon to retire CEO of Shell, but the activists were denied access to the meeting.

Celestine had travelled from his home in Ogoniland, Nigeria, to conduct the protest. It follows a report by the UN nearly two years ago which concluded that a succession of oil spills by Shell in Ogoniland over half a century will require $1bn start-up finance and take 35 years to clean up.

Celestine said: “I have travelled all the way from the Niger Delta to ask Shell what it has been doing in the past two years since the UN report established their responsibility for the devastating pollution in my homeland. We see no evidence of Shell starting the clean up.”

Shell suspended its activities in Ogoniland in 1993 but recently reentered the area to conduct an asset inventory, a requirement of the UN report.

Corporate support for the arts

Sarah Shoraka, an oil and human rights campaigner from Platform, said: “It’s not surprising that Shell seeks to clean up its public image through cultural sponsorship when it’s involved in so many environmental and human rights controversies around the world.”

The issue of corporate support for the arts and who and what is appropriate is becoming an increasingly hot issue as public funding cuts continue and the pressure to secure private money grows. Platform has recently been highlighting Shell’s sponsorship of the Southbank Centre, and Art Not Oil is organising an event on 15 June that may lead to an ‘intervention’ at this year’s Meltdown festival, curated by Yoko Ono, which takes place at the Southbank from 14-23 June. Ono has in the past been highly critical of the process of fracking, the controversial extraction of shale gas that Shell is also involved with.