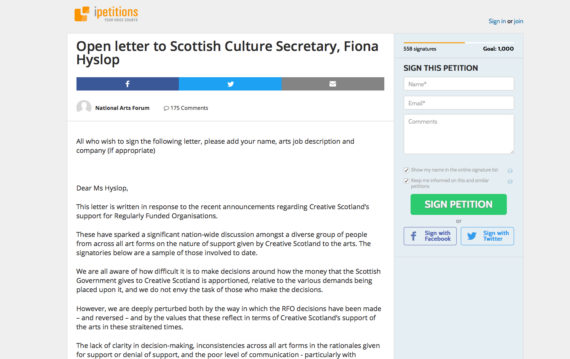 An open letter criticising Creative Scotland’s handling of arts funding has called on the Scottish government to give artists and arts organisations in the country a much bigger say in funding decisions.

Published on ipetitions.com, the letter is addressed to Scottish culture secretary Fiona Hyslop and has so far attracted nearly 600 signatures.

The letter describes “a significant nation-wide discussion amongst a diverse group of people from across all art forms on the nature of support given by Creative Scotland to the arts”.

It says “a depth of feeling and sense of urgency” has led to the belief that “in order to create a strong and sustainable creative sector, artists must be involved at a political level in the development of arts funding strategies”.

Criticising Creative Scotland’s “lack of clarity in decision-making” and the “inconsistencies across all art forms in the rationales given for support or denial of support”, the letter states: “Our aim is to ensure that the voices of all of those who are subjected to funding decisions by Creative Scotland are included in the discussions with government, rather than simply at the arms-length level of communication with Creative Scotland itself.”

It adds that a new artist-led National Arts Forum is in the process of being formed “with the aim of gathering, reporting and representing the voices of those working in the arts across Scotland”.

The open letter adds to the sense of crisis at Creative Scotland which has faced wide-ranging criticism since it announced its 2018-21 regularly funded organisations (RFOs) at the end of January.

The announcement saw some organisations dropped and then reinstated, while Creative Scotland board members Ruth Wishart and Maggie Kinloch resigned over the decision-making process.

The funding round also saw the artist-run Glasgow gallery Transmission lose its regular funding, with no reprieve in sight.

Joan McAlpine, the convener of the committee, told The Herald newspaper: “All MSPS on the committee felt that as Creative Scotland is accountable to parliament and a major recipient of public money, recent events require to be scrutinised.

“We are interested in the process of how such decisions are made, what the strategy is and what needs to change and improve. MSPs previously expressed concern at the regional distribution of RFO money and I imagine that will come up again too.”

The funding body has faced further scrutiny this week following revelations that it gave £1 million to the makers of the Netflix film, Outlaw King.

The funding, announced in December, was purportedly to encourage the £85 million film about Robert The Bruce to be shot in Scotland. However, it has since emerged that – perhaps unsurprisingly, given the subject matter – the filmmakers always intended to make the film in the country.

Many in the arts in Scotland have been calling for a wholesale rethink of how Creative Scotland is run following the anger and confusion that greeted the RFO announcement. Headlines on the subject in the Scottish press have ranged from ‘The Last Days of Creative Scotland’ to ‘Time to put the culture into Creative Scotland’.

The acclaimed Scottish theatre company Fire Exit has also issued an open letter after it received a 100% cut in its Creative Scotland funding in the RFO announcement.

Stating that the company “will face potential closure in April 2019”, the letter signed by the Fire Exit board urges a reversal of the decision while questioning how Creative Scotland came to its decision.

The letter states: “In this funding round no advice has been taken from external peer review panels. Creative Scotland do not undertake any external, or internal, evaluations of artistic quality. We have been told that the final funding decisions were made by a senior management team who were not given sight of our funding application or business plan.”

The letter adds that the company had raised concerns with Creative Scotland about the decision-making process three years ago at the time of its last funding application, but were told “not to worry as our funding bid at that time had been successful”.