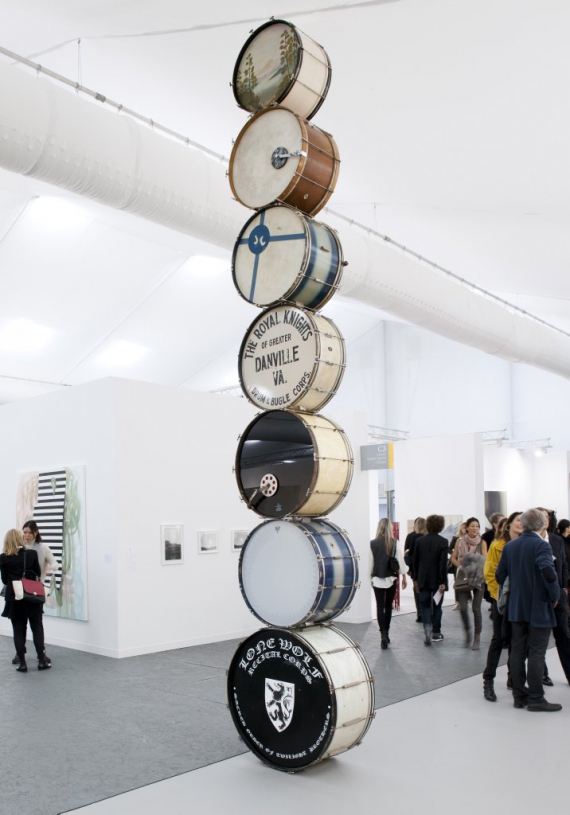 Tate has acquired four works by emerging and leading international artists through The Outset/Frieze London Fund, which each year enables the gallery to extend its collection with pieces selected from the Frieze Art Fair in London.

This year’s fund of £150,000 has enabled the acquisition of Terry Adkins’ Muffled Drums (from Darkwater), Christina Mackie’s The Dies, James Richards’ Not Blacking Out, Just Turning the Lights Off and Sturtevant’s Trilogy of Transgression.

The Fund is organised by Outset which was founded in 2003 as a philanthropic organisation dedicated to supporting new art. The charity focuses on raising private funding from its supporters and trustees for public museums, galleries and art projects.

Nicholas Serota, Director, Tate said: “Outset’s work in championing emerging and re-emerging artists has become a vital component of the contemporary art world. Tate is enormously grateful for the very generous support from Outset that has allowed us to add many important works to the national collection over the past ten years. We are once again excited to be able to select work from Frieze Art Fair in London, so that a broad public at Tate can experience new art as it emerges.”

Frieze Projects 2013: “This year it’s not just about the fair” – We talk to Frieze Projects curator Nicola Lees.about this year’s artists and presenting work in an art fair context.

‘Frieze week’: other art fairs are also available – news of this week’s other fairs, some artist-led and focused, some themed, and some unashamedly commercial.

Review: Frieze London – a good education in how the art market works – Frieze first-timer Gillian McIver casts an artist’s eye over the fair