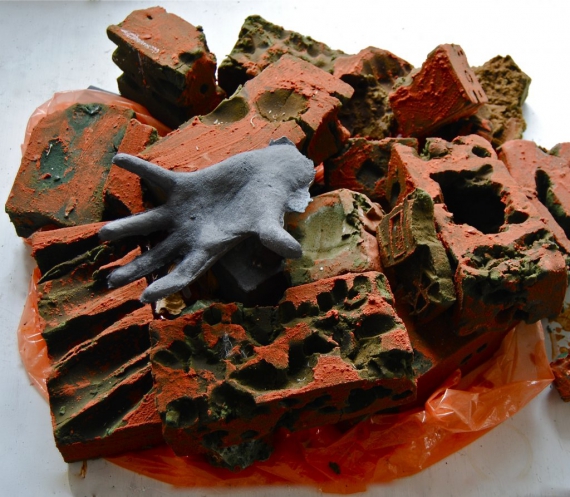 On arriving at Art in Perpetuity Trust (A.P.T) in Deptford, I’m told that Paul Noble is still making his mind up. The Turner Prize-nominated artist is deciding on the three awards of £500 for part one of the Creekside Open. When, 15 minutes later, the announcement is made in the sunny riverside yard of A.P.T. gallery, Noble admits that “when it comes to picking three artists, it’s actually very difficult”.

The awards go to Rebecca Townrow for her “crazy grid of plaited hair”, Guimi You for bringing up “the subject of constipation” and Lana Locke for her “really bonkers piece of work”. An element of bravery, self-exposure and humour draws the three winning works together.

“A trophy to the younger me” is how Rebecca Townrow describes her winning piece. “A lot of my references mix cultures, as I went to a mainly Afro-Caribbean school in Birmingham. To fit in and impress I would canerow and gel curl my hair,” she explains, her blond hair now long and curly. “I would do it, but look ridiculous, trying to maintain a white afro.”

Painting an atmospheric landscape that is in fact constipated bowels is a way for RCA MA Painting student Guimi You to express her inner complexes. Not shying away from embarrassing bodily functions, she has also used painting to express pimples on her skin. She was drawn to enter the Creekside Open after being told that her works had an affinity with Noble’s.

For Lana Locke, a recent graduate from the MA Fine Art at Chelsea, the award follows her recent selection for New Contemporaries 2013. “It’s odd when you get six months of nothing and then a sudden flux of interest,” she muses. “It’s really nice to be part of the show – the whole thing is quite bonkers, really. The show isn’t geared to the commercial object, it’s more about just being creative with the space.”

Locke appears happy with Noble’s description of her work, which consists of a distorted cast iron hand coming out of a rubble of wet foam bricks seated on a plastic bag. It resembles a recent archaeological find or discard from a building site – fitting for the Merz Barn nature of the exhibition hang.

A total of 777 artists submitted 2318 works this year, of which Noble selected 125 works for the exhibition. Although he jovially describes his selection method as “hand on cursor clicking green, ‘thumbs up’, or red, ‘thumbs down’,” he has approached the curation of the show with great seriousness. Drawing his theme from the recent Kurt Schwitters retrospective at Tate Britain and the honesty he saw within the artist’s creative output, Noble says: “I didn’t have any fixed criteria. Some works are really sophisticated and some are borderline outsider.”

Noble describes the committee at A.P.T as a “lovely, generous bunch of people” and this enthusiasm can be seen in the energy of the exhibition and the way that he is happy to get drawn in to long conversations with artists about their work.

Liz May, A.P.T’s gallery manager, explains that Noble spent two days in the gallery working with the A.P.T committee to hang the show: “There’s a lot of work but nothing is crowded – there’s a lot of space around each work. Paul was very clear on how he wanted the space to look.” 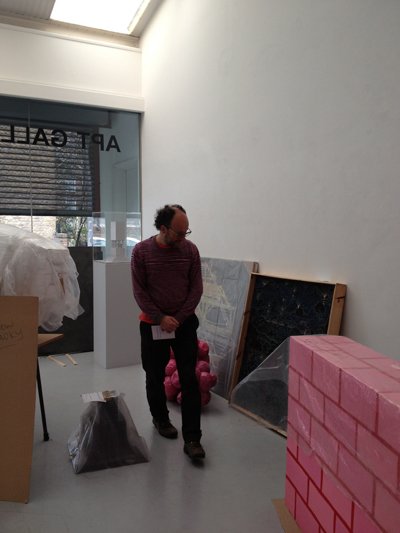