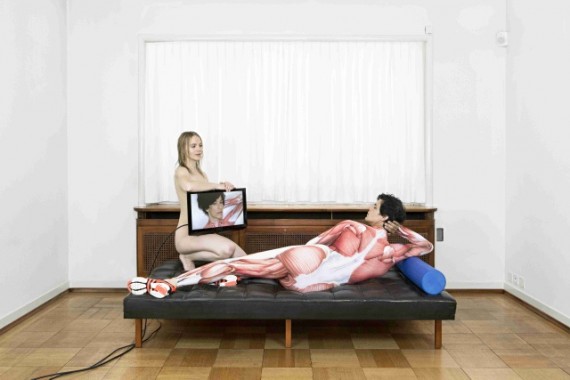 There’s something new happening at this year’s Frieze Art Fair and it’s not anything that can be easily bought and sold on the international art market. ‘Live’ is an initiative that sees six artists and galleries present active or performance-based installations at the London fair, now in its 12th year. There’ll be new works and restagings of historical pieces by artists represented by galleries from Paris, Berlin, Istanbul, London and Iwaki, Japan.

Veteran German artist Franz Erhard Walther will ask visitors to re-animate two quasi-objects that he made in the late 1960s and mid-1970s – Sehkanal (1. Werksatz no. 46) (1968) and Winkel (1975). In the process, he will turn the audience into performers. Other works also encourage an active involvement and present a challenge to the viewer: Japan’s UNITED BROTHERS will be serving soup made by their mother using vegetables grown in the nuclear-disaster site Fukushima; Adam Linder is offering his Choreographic Service No.2 as a demonstration that can then be hired by fair-goers after the event.

Described by Frieze London’s deputy director Joanna Stella-Sawicka as “a major new initiative that shows Frieze’s commitment to featuring the most ambitious and experimental art being made today”, the new ‘Live’ strand is indicative of a resurgence in performance-based art. And with spoken-word performance artist Tris Vonna-Michell nominated for this year’s Turner Prize, it seems that work with a live or performance element is enjoying a period in the spotlight.

It hasn’t happened overnight – for the past ten years or so performance-based art practice has been growing. Major festivals, biennials, museums and now art fairs have been opening their doors and dedicated spaces to the exhibition of live works, as artists and curators become more interested in experimenting with and exploring the role of the audience and their relationship with an artwork.

Away from the glare of publicity that high-profile events like Frieze and the Turner Prize attract, there are a small number of artist-led initiatives in the UK that are helping to pave the way for emerging performance-based artists. In London, Benjamin Sebastian and Bean of ]performance s p a c e[ (]ps[) work very hard to support emergent artists. “The experimental field of the medium is greatly under nourished and has limited resources made available to it,” says Sebastian. “It’s this area that Bean and I are passionate in supporting through ]ps[.”

An artist-led space, ]ps[ was, says Sebastian, “conceived out of a frustration of a lack of access to space for both live events and to facilitate the dialogues desired to take place between the ‘event’.” The pair’s current project is Performance Art Faction, which runs until May 2015. Consisting of research labs, performances, soapbox sessions, residencies and exhibitions, it will explore “the intersections of contemporary performance art, politics and society”.

Alongside their work with ]ps[, both are able to maintain their practice as solo artists and will be performing at Venice International Performance Art Week. Here, works from the pioneers of performance art such as Chris Burden and Vito Acconci will be shown alongside contemporary established and emerging artists, reflecting influences and current trends within the field.

Also in London are CLUSTERBOMB [collective], a contemporary performing artist collective who work across a broad range of disciplines and collaborative processes. Their most recent project, I AM/THE/ISLAND, is a site-responsive performance piece inspired by JG Ballard’s Concrete Island, Daniel Defoe’s Robinson Crusoe and the dystopian urban landscape of the high-rises and congested snake-like motorways of East London. It will be shown at Chisenhale Dance Space on 29 November.

In Birmingham, a new initiative, Home for Waifs and Strays (HFWAS) has been set up by Birmingham-based artists Kate Spence and Aleks Wojtulewicz. They provide support to emerging and established artists, creating a regular platform for performative art in the Midlands. They plan to host residencies and create regular exhibition opportunities and networking for local artists. Later this month they will be taking part in The Hockley Hustle, a music and art festival in Nottingham, where they will stage a live art ‘dance-off’ in collaboration with Nottingham-based collective Little Wolf Parade.

“Glasgow is a particular hub for artists working with performance from both theatre and visual art backgrounds, and these disciplines are brought together in Buzzcut Festival and the programme at the Arches. There is also a strong performative thread in Dundee. Lots of artists work with performance as part of their practice alongside sculpture, drawing and installation and this manifests in a wide variety of performative styles.”

Performance art has currency, it is a language that people are engaging with – it is immediate, immersive and often participatory. It creates a new space for the audience, one in which they can feel connected and part of something. Hannah Clarke and Eva Martino, the team behind this year’s artist-led Bristol Biennial, explain that the programme was informed by the audience’s need for a sense of human engagement, for realness, presence and experience. The selection for the biennial wasn’t about showing the current trends within the art world, but more about creating the trends, giving the audience something that they were looking for.

This year’s biennial was loaded with performance work, sound pieces and interactive events. During durational performances people would talk about it to other visitors as they passed in and out of a space, creating an energy and engaged dialogue that doesn’t normally happen at such large-scale art events.

In 2012, Tate Modern opened The Tanks, the world’s first museum gallery permanently dedicated to the exhibition of performance, live art, installation and film. At the same time it launched BMW Live, a programme of events and talks which focuses on performance and interdisciplinary art in the gallery and online. Catherine Wood, curator of the BMW Live programme, said that “the idea is to make visible the performative basis of so much art since the post-war period.”

One of the strands, the Performance Room, is a pioneering programme of live broadcasts, where the artworks are performed solely online with no live audience present. Afterwards, viewers are able to ask questions to the performer in an online Q&A. The idea, says Wood, was born out of a frustration with the way in which online performances are viewed. “It’s always ‘second hand’, usually a poor quality angle view of a performance that was presented onstage, for a live audience. At home, watching online, one has a partial, secondary view, one feels that the event is primarily for the audience in the theatre, and we are allowed a glimpse in.

“I wanted to think about how to use technology in the simplest and most ordinary way: how we use skype between friends, for example. And to think of one’s computer as a portal that could offer primary access, and a kind of intimacy, with a performance work.”

Artist and choreographer Alexandra Bachzetsis is the next artist to perform in the Performance Room, and will be broadcast at 8pm on 23 October, via the Tate YouTube channel. Bachzetsis will be presenting From A to B via C, a piece which was originally conceived for theatre, then transposed for exhibition, and now for a live online audience. Using the method of online dance tutorials, she explores the notion of transposition, and how movement, training and language is transferred from one body to another. What’s interesting about the piece is the various transformations that it will take, existing as three versions that intertwine through different contexts of art form, time and space.

Artists such as Eddie Peake and Vanessa Beecroft confuse the space and the gaze of the viewer with erotically charged, model-like performers, standing around like confrontational human sculptures, embodying the same space as the audience. Throughout the late 1990s and 2000s, Franko B initiated various intimate one-on-one performances; he describes the audience as complicit in the moment, referring to them as “his partner in crime”.

Jirˇí Kovanda’s audience in Kissing Through Glass (2007) were an active and integral part of the piece as he stood behind a window in the Tate, holding a note that asked people to kiss him through the glass. In Marina Abramovic Presents (2009), Abramovic orchestrated a four-hour tour of durational performance pieces from a curated group of international artists.

Before the audience were able to view the work, they were each asked to don white lab coats and then taken through a one hour ‘drill’, in which Abramovic explained, through a series of exercises and tasks, how to slow themselves down in order to experience the works. Their participation in the ‘drill’ and the regimented time-scale of viewing the performances made it less of a viewing experience and more a test of endurance.

Across the UK, there are many examples of crossovers between performance art and live art. Both possess a liveness and immediacy. Live art is a relatively new term and seems to be more specific to the UK than the rest of the world; it covers a wide variety of ‘live’ mediums. While the crossing over and merging of disciplines and the experimental nature of live art is interesting, it is not anything that the visual arts hasn’t been doing for many years. Instead, live art has opened the way for theatre to loosen its restraints and be more experimental.

Franko B defines himself as a visual artist who also makes performance. In the beginning he was very supportive of and involved with events and organisations advocating new forms of live art, but he is keen to make the distinction between his work as a visual artist/performer and ‘live art’.

Feeling that his work has been “hijacked” by this term, he says: “Live art is the bastard child of theatre. [Performance art] is not theatre or a piece of live art or a spectacle. Performance is not drama; we can have drama as a by-product of a performance. Performance to me is about putting oneself ‘on the line’, taking risks because there are no other options at that moment. In this context and in everyday life, everything is performative but not necessarily performance.”

Bean and Sebastian believe that “the UK in general has an awkward relationship to performance art, it is much more the pioneer and advocator for live art. Live art is greatly supported and produced in the UK; performance art remains a fringe medium emitting from a fine art lineage that is still greatly underrepresented, misrepresented and undernourished in the UK.”

But maybe things are beginning to change. With museums and institutions finally catching on and artist-led initiatives supporting and nurturing emerging talent, the time could now be right for a wider recognition and support of performance art practice in the UK.