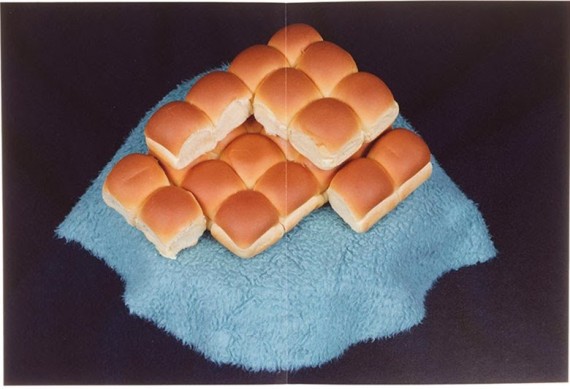 “Unfolding like a private performance in an empty house, or after everyone falls asleep…” That’s how 28-year-old American photographer Paul Salveson refers to his photographic process, and it’s as apt a description as any.

With Between the Shell, his first photobook, he forces the viewer into awkward corners in which mundane environments are transformed with effortless flair. He creates meticulous visual arrangements of domestic objects, thus revealing a perspective that empties them of their preconceived associations. Alien yet familiar, it’s as if Salveson’s absurdist constructions have been paused mid animation – playfully, and with irreverence towards their function.

Cod liver oil capsules migrate across a mattress in the direction of the duvet; straws wrapped in tape lie across two upside-down plastic cups; and a bag of frozen sweet corn hangs from the end of a pole in front of a window. This is an art of dislocation, strangely unreal, detached and theatrical, while at the same time bringing new energy to still-life photography.

Salveson seizes on a freedom of form and composition, his influences ranging from the baroque to the kitsch. He sets forth a quixotic examination of readymade objects (towels, wicker baskets, yoghurt pots, soap holders, dumb bells, garishly-coloured toothbrushes and so on) to give birth to surreal, dysfunctional monuments of banality. It’s a cultish practice, gestural and ever so hip, though evidently the judges of the First Book Award 2013 were smitten by his atmospheric pictorial worlds and subtle humour.

While Between the Shell is actually a rather clunky book – more often than not, images are printed as full-bleed spreads on thick card – it is nevertheless a faithful imagining of the photographer’s vision. Like a pictorial magic box, it is brimming with diversion and trickery.