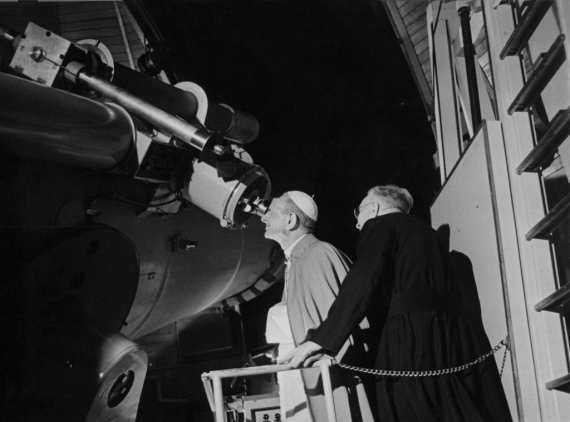 There are several reasons why – in spite or perhaps because of their ambiguity – the archival images from Laurent Grasso‘s Specola Vaticana (2012) are ripe for investigation.

Firstly, are the popes and bishops really engaged in an act of scientific enquiry or are they merely posing alongside the technology? Similarly, by looking through these giant telescopes, what do they expect to discover? Is it the physical universe that concerns them or a secret fervour to grasp the metaphysical? How? Why? What if? Whether? Really? These photographs – which are featured in a new book Curiosity: Art and the Pleasures of Knowing and Hayward Touring exhibition of the same name – force us to ask questions as we become unwitting collaborators in a search for meaning.

The Vatican’s relationship with science and cosmology is one of paradox and debate. The case of Galileo, for example, is a well documented one. A hugely influential Italian astronomer, physicist and philosopher who constructed his own telescope, he was long revered by the Catholic Church, only later to be stigmatised when his observations proved the idea of a geocentric world to be a fallacy. Having established the heliocentric worldview following the publication of his book Dialogue Concerning The Two Chief World Systems in 1632, he was condemned for heresy and forced to live out the remainder of his life under permanent house arrest.

The Specola Vaticana images represent an unusual collusion between faith and scientific research. They demonstrate an overt fascination with looking at the world and beyond – its pleasures, its contradictions, and most crucially, the immunity to boredom it can offer – even for those whose faith may at times conflict with the outcomes of such research.

Rigorously curated by Brian Dillon, writer and UK editor of the New York art and culture magazine Cabinet, Curiosity is a vastly eclectic book-come-exhibition, a cornucopia of objects, images and ideas ebbing and flowing across media, time periods and scales: from the everyday to the infinite.

Curiosity: Art and the Pleasures of Knowing is published by Hayward Publishing. For more information or to order a copy click here.

The exhibition continues at Turner Contemporary, Margate until 15 September 2013, and then tours to Norwich Castle Museum and de Appel, Amsterdam. southbankcentre.co.uk