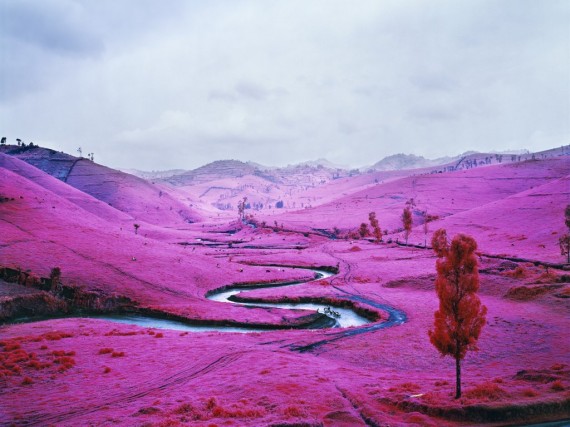 The photographs of Richard Mosse in The Enclave speak specifically of the eastern region of the Democratic Republic of Congo – a war zone that has bore witness to unimaginable cycles of butchery, routine ambushes and systematic sexual violence. But as well as being a culmination of his account of the circumstances surrounding the war, they are also an interrogation of the urgent issues born out of the depiction of conflict around the world.

Mosse produced these images using a large format camera coupled with discontinued military reconnaissance film. Originally designed for camouflage detection, the film registers an invisible spectrum of infra-red light. The effect is both realistic and hallucinatory. Rendered in lush hues of reversed colour, rivers snake through vast mountain ranges, child soldiers brandish machetes, and commandos pose for the camera in scenes that could be straight out of a fashion shoot.

Currently on display at The Pavilion of Ireland in Venice as part of a large-scale installation, the work is due to be published in a 240 page book by Aperture Foundation. The images are seductive, disorienting, haunting, enigmatic, pristine, devastating. What we are confronted with are not awe-inspiring scenes of nature but a slow, shocking depiction of the ‘military sublime’ – a mode of photographic representation that stylises warfare and ushers in a sense of unreality to make the horror somehow easier to digest.

It is tempting to dismiss this approach as detached and theatrical; after all, converting a situation of profound human suffering into something beautiful is problematic territory for photographers. But gradually, one sees that at the heart of his practice is the desire to hurtle, as Mosse states, “two counter-worlds into collision: art’s potential to represent narratives so painful that they exist beyond language, and photography’s capacity to document specific tragedies and communicate them to the world.”

A photojournalist from Kilkenny, Ireland, Mosse effectively tosses a Molotov cocktail through the stained-glassed window of photojournalism. He sublimates violence and disaster through distinct artistic strategies that in turn forces a deeper reflection on a war in which 5.4 million people have died since 1998.

To browse pages or pre-order a copy of the forthcoming book The Enclave: Photographs by Richard Mosse, published by Aperture, visit aperture.org

The Enclave continues until 24 November at the 55th Venice Biennale. irelandvenice.ie